Morning sunlight poured through the windows as Chris Gantt assembled his glass bottles and beakers along the bar. The name of his restaurant — Reid’s Apothecary — implies Gantt is well-accustomed to brewing up his own concoctions.

While he’s known for serving intriguing cocktails, he’s also explored the marvelous realm of the mocktail. That’s right — a beverage that offers all the fun and pizazz of a libation but without the toxicity.

As the Dry January movement has gained steam over the past few years, mocktails have become quite the rage. And as more and more people look to start a new year off on a healthier foot, more mixologists are exploring alcohol-free flavors.

“I know a lot of people who do Dry January. We are going to add a couple of mocktails to the menu. Of course, you can take the alcohol out of just about any of our cocktails except for Manhattans or an Old Fashioned,” he said.

“We do a lot of shrubs anyway so we incorporate those as well,” he says.

“These are very unique and very fresh … like you just pulled them out of your garden.”

For those looking to take a break from the booze in 2021, Gantt offers three refreshing, alcohol-free alternatives for some sweet sipping.

“The first one is called a ‘Jamble,’ which is the alcohol-free version of the Bramble. You use blackberry jam — we make our own fresh — or you can use preserves. Then, you add two scoops of plain or Greek yogurt,” he says. “An ounce of lemon juice and two ounces of water. For the alcoholic version, the water would be gin.”

“The coolest part is that you shake it with a ‘whip shake’ … that’s using only a couple of ice cubes to break up the drink without diluting it,” he says, moving the shaker in a circular motion.

From there, he strains the mixture into a glass and garnishes it with mint. The result is a filling, fruity treat — slightly akin to a smoothie — but definitely delish.

Next, the Pimm’s Cup — sans alcohol.

“You make the alcohol version with Pimm’s liquor so that’s where the name comes from,” he says. “My grandmother used to drink these.”

This mocktail — which Gantt has titled Out of the Garden — combines fresh cucumber, strawberries, ginger, and ginger beer for a light, airy taste.

“First, you add the strawberry slices and the cucumber. You can just lay the cucumber around the glass and press it against the glass. It’s called creating ‘serpent,’” Gantt says. “Then, you muddle it a bit.”

Mix in fresh ginger syrup, fill the glass with ice, then top with ginger beer. You can also do sparkling water.”

Last but not least, there’s the alcohol-free Raspberry Spritzer. It’s incredibly simple, yet so satisfying.

“You add two ounces of that and some fresh raspberries in a Pilsner glass and lightly muddle them,” he says. “Then, you add crushed ice and two and a half ounces of apple cider vinegar and fill the glass with sparkling water.” 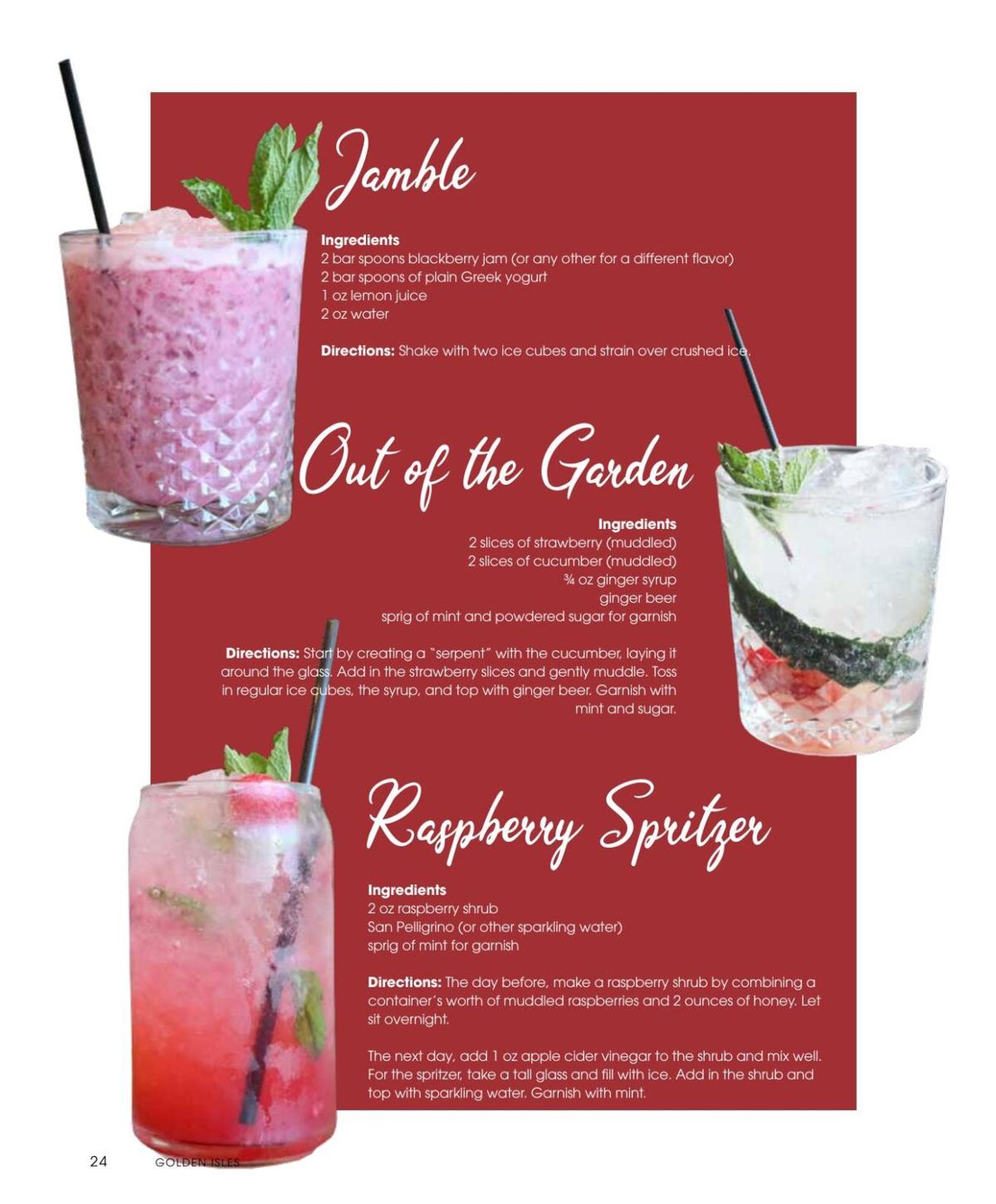