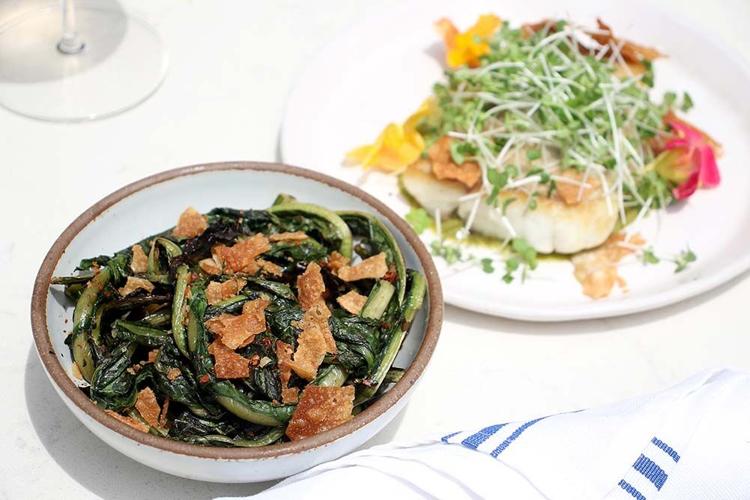 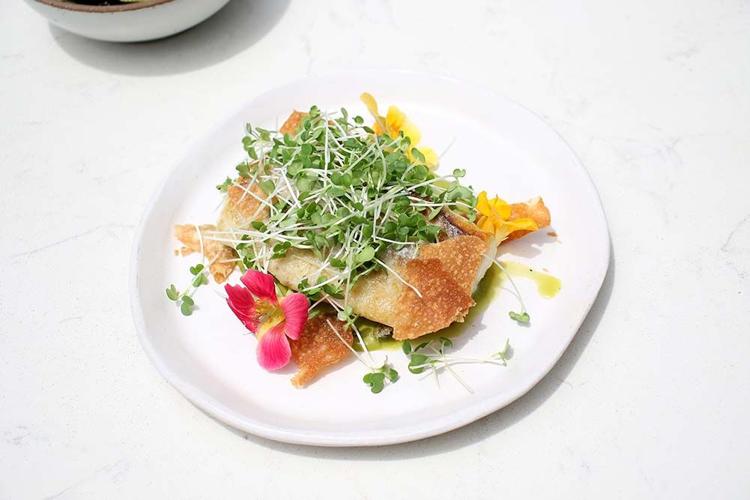 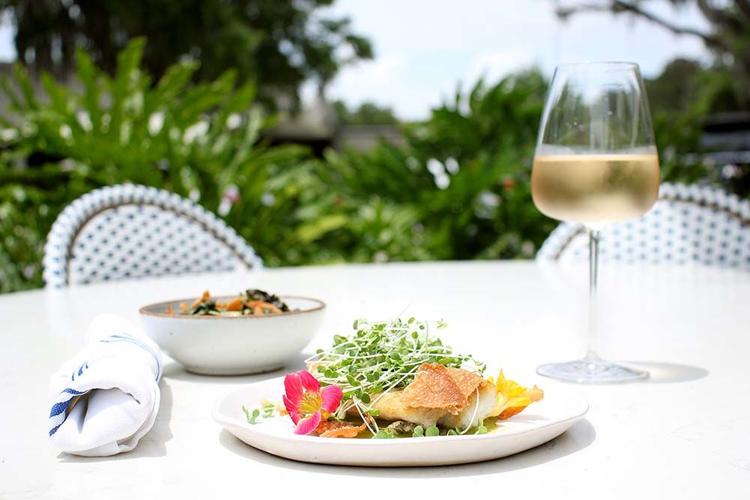 Dorothy’s chef and owner Daniel Auffenberg puts a very high priority on fresh ingredients and seasonal flavors, not much different from how his grandmother treated food.

But that’s about where the similarities between the menu at Dorothy’s Cocktail & Oyster Bar and what Dorothy herself would have cooked end.

Not originally from the area, the Auffenbergs — Daniel and his wife, Claire — learned about St. Simons Island after Daniel’s parents retired there.

At the same time, after having established himself as a chef, Daniel and Claire were looking to strike out on their own venture with an original restaurant. Dallas, where they lived at the time, was and is a very competitive market for new restaurants.

“Plus we’d always wanted to move to the coast, and the market was open and available,” Daniel Auffenberg says.

Dorothy’s opened in May 2021 after much thought and effort went into developing the business model — Asian-influenced American fare, a robust cocktail offering, and unmatched hospitality.

The menu covers everything from burgers to Szechuan noodles, scallion pancakes, Kushiyaki, and fried rice.

Auffenberg built a cooking career in the kitchens of New York, learned front-of-house management in Dallas, and even dabbled in restaurant real estate.

But when it came time to start his own business, Auffenberg drew from what he knew.

“My wife and I traveled to Asia a few times … on our honeymoon and a few times afterward,” he says. “When I was in New York, Asian food was something I would go venture out of my way for.”

It all seemed to fit. The market was drenched in Southern, French-inspired, Italian-inspired establishments, but Asian-inspired American was a fairly vacant niche when he opened last year.

“There are Asian restaurants in the area, but not many upscale dining options with that kind of cuisine,” Auffenberg says. “We kind of reverse-engineered our way into the cuisine.”

Bringing an Asian influence to the table allows a chef to add a maximum amount of flavor with minimal ingredients, he explained.

“A lot of the products that have been common throughout many Asian countries, specifically fermented products like oyster paste and fish sauces, that have a lot of umami flavor to them and allow you to pack that punch on a dish that would be very difficult to get without those ingredients,” Auffenberg says.

The restaurant’s signature hospitality came from his late grandmother, Dorothy, who passed away in 2011. Auffenberg says her style of homemaking and her demeanor as a host permeates his St. Simons Island restaurant.

“We don’t usually highlight her food at the restaurant, but her spirit of being a good host,” Auffenberg notes. “Her hospitality was unmatched with people I’ve met in my life, always making sure everything was made from scratch and there was enough food for everyone. She never spoke of anyone unless she had a kind word to say about them. She never spoke in anger.”

The Dorothy mentality can be felt in how customers are served, but also in how the kitchen and wait staff are treated, he adds.

That, along with the bar’s cocktail program, is among the restaurant’s main selling points.

“I think it’s unique to the area,” Auffenberg adds.

“We have a great bar staff that create incredible cocktails. We have a huge selection of rum and gins and bourbon, and we have the tools to play around with a lot of riffs on classics because they (the bartenders) have such a strong knowledge of classics and the skills to play around with new creations that are fun for the guests to experience.”

Micro Bok Choy (or any micro green you prefer)

Directions for puree: Heat oven to 450 degrees. Heavily salt a large pot of water and bring to a boil. While waiting, place garlic in a pan with enough oil to cover the garlic and heat over a low flame. Once garlic begins to brown, remove it from the oil and set aside. Lightly oil the jalapeno and roast in the oven for 3 minutes until it begins to brown. Remove from the oven, deseed and dice. Set aside. Set up a bowl of ice water with another bowl sitting on top of the ice water. This will be used to cool the puree quickly. Once water is boiling, blanch the green onion tops in the slated water for 1 minute.

Remove from the water and place in a kitchen towel. Squeeze as much water out of the greens as possible (be careful, the liquid coming out will be very hot). Place the greens, garlic, jalapeno, lemon juice, filtered water, and a pinch of salt into a blender. Blend until very smooth (add more water if needed). Once smooth, put the blender on high and start dropping the chilled butter cubes into the blender. After blending, quickly pour the contents through a fine mesh strainer and into the iced bowl. Stir the contents of the bowl to cool the puree quickly. This is very important because if it is not cooled quickly the puree will start to turn brown. Once cool, wrap and refrigerate until needed.

Directions for dish: Heat your grill. While waiting for the grill to heat, heat up a small stock pot with 2 inches of canola oil until it reaches 325 degrees. Once the oil has reached temp, place the wonton wrappers in one at a time. After the bottom side crisps up (about 30 seconds) flit the chip and allow the other side to crisp up (about 15 seconds). Remove from oil and sprinkle with salt. Break the chips into small pieces and set aside. Season your fish with salt and rub the bottom with oil. A fish basket for grilling fish can be very helpful here but is not necessary.

Place the fish on the grill and close the lid. When the fish is almost ready, take your dandelion greens and cut off the bottom inch.Toss them in a bowl with salt and oil. Grab a grilling pan and throw all the greens in it. Grill them until charred, then add a little lemon juice and red pepper flakes. Remove the fish from the grill. If you are unsure whether it is done, you can use a thermometer. You are looking for a temp around 125 degrees. Place a small dollop of butter on each fish and allow to melt. To plate the dish, take a large spoonful of the spring onion puree and spread it in a circle in the middle of the plate. Place your fish on top of the puree. Top the fish with wonton pieces, micro bok choi, and nasturtium flowers. Place your dandelion greens on the side of the plate or in a large bowl to be served family style. Enjoy!