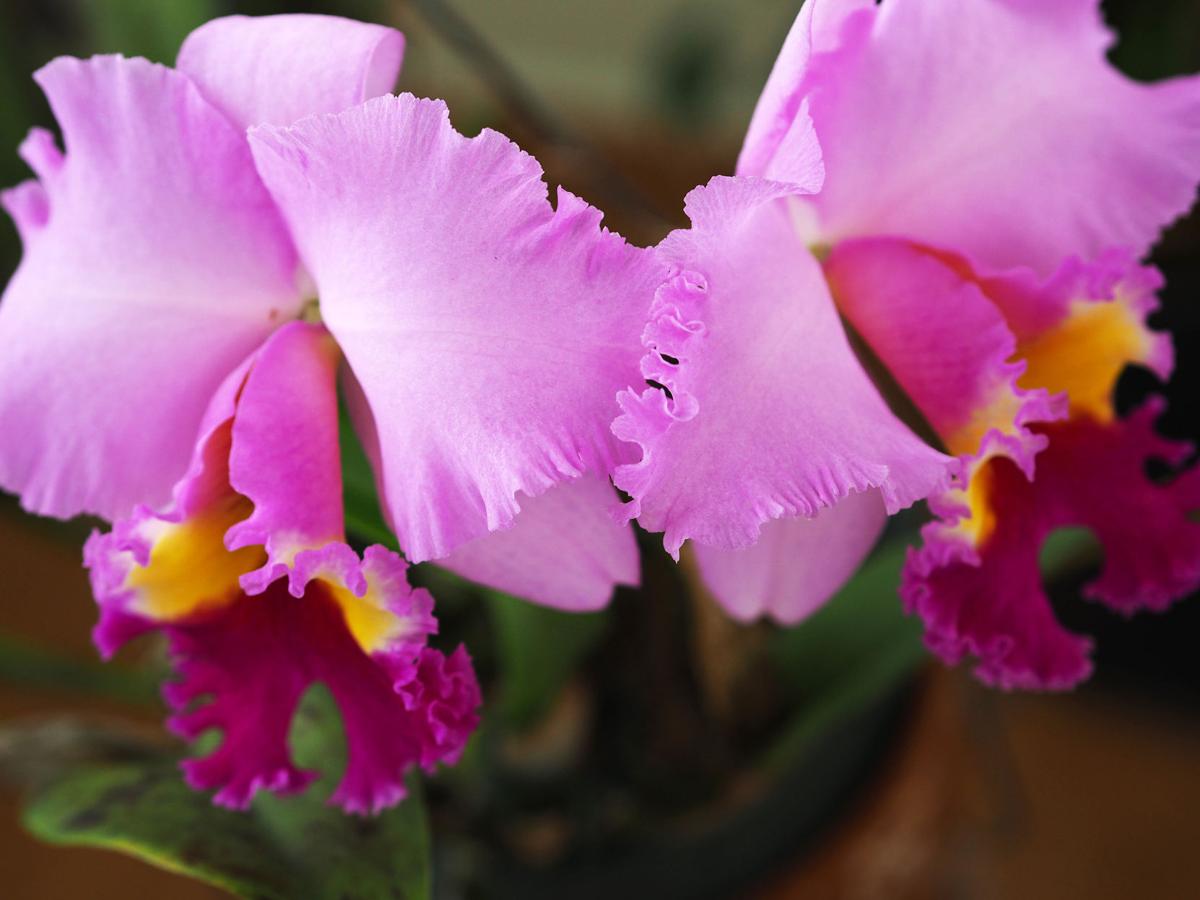 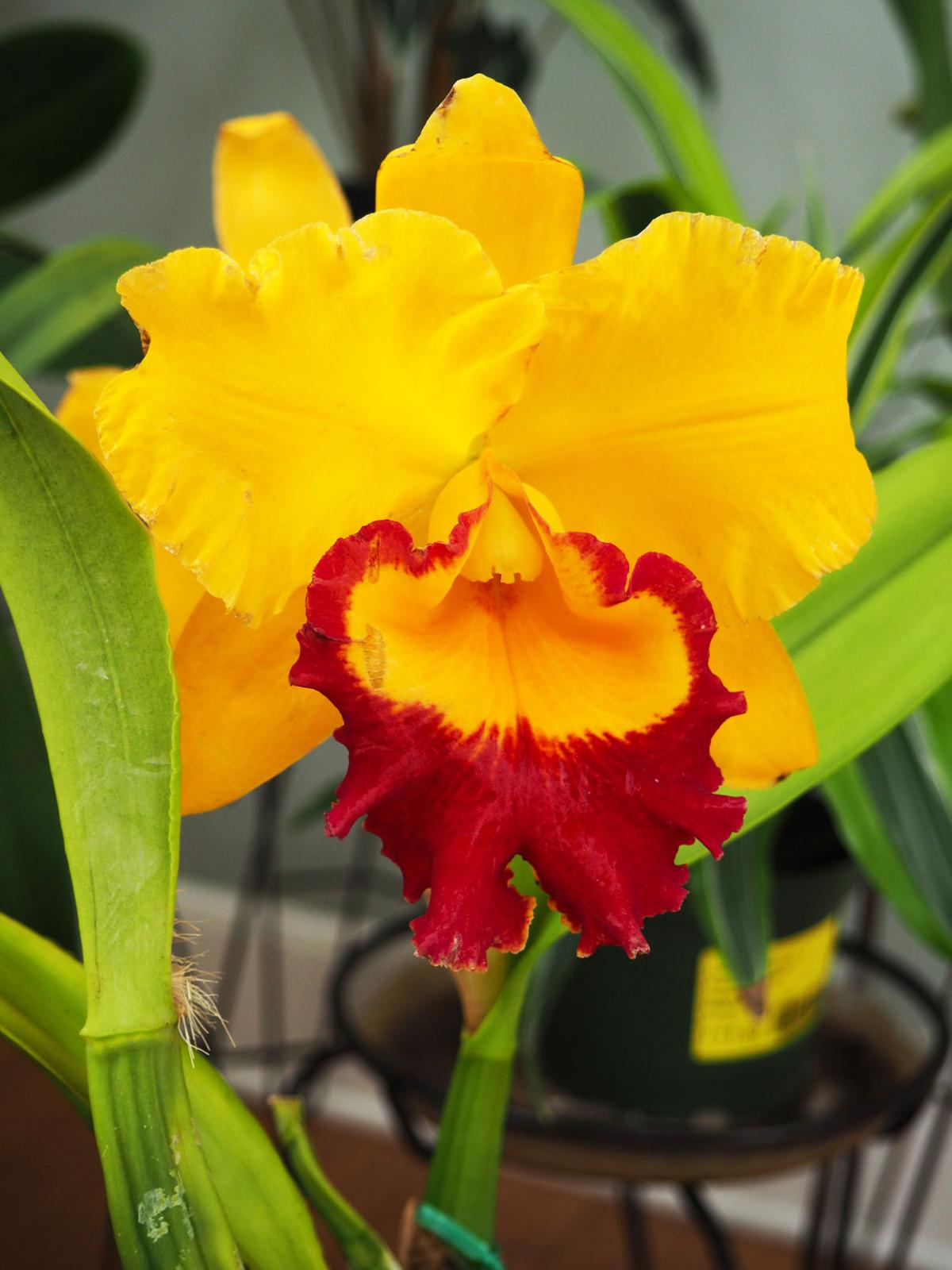 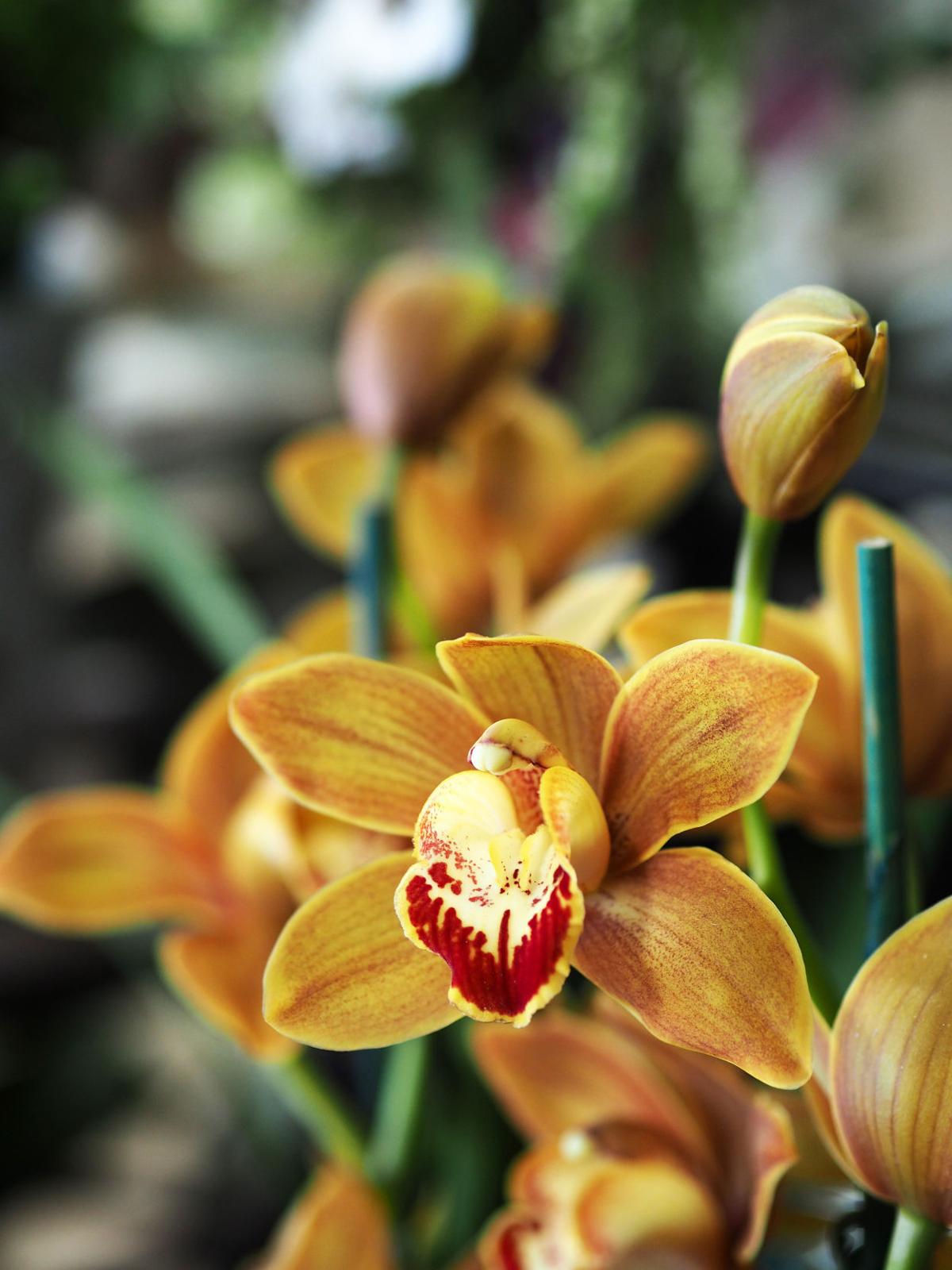 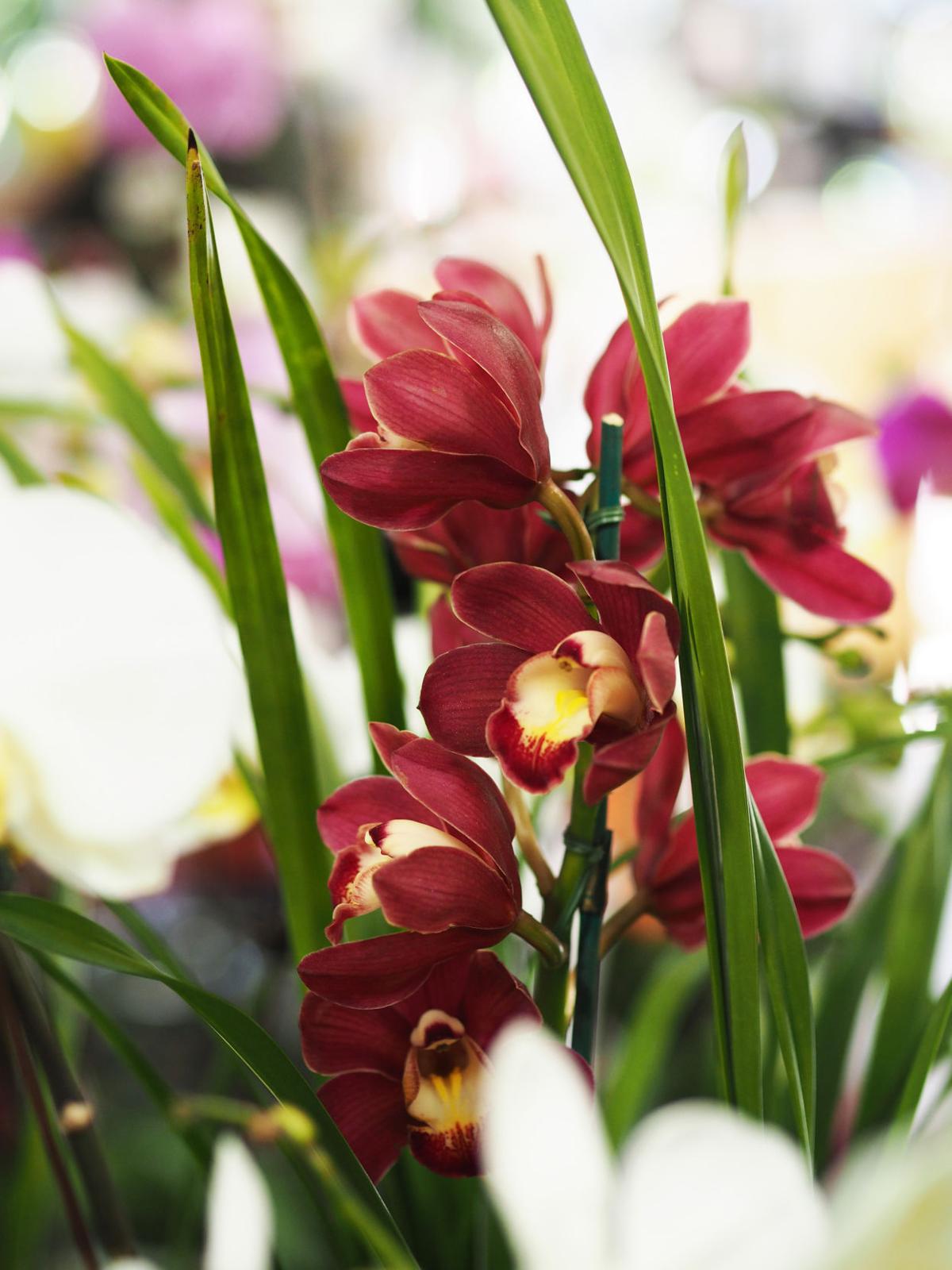 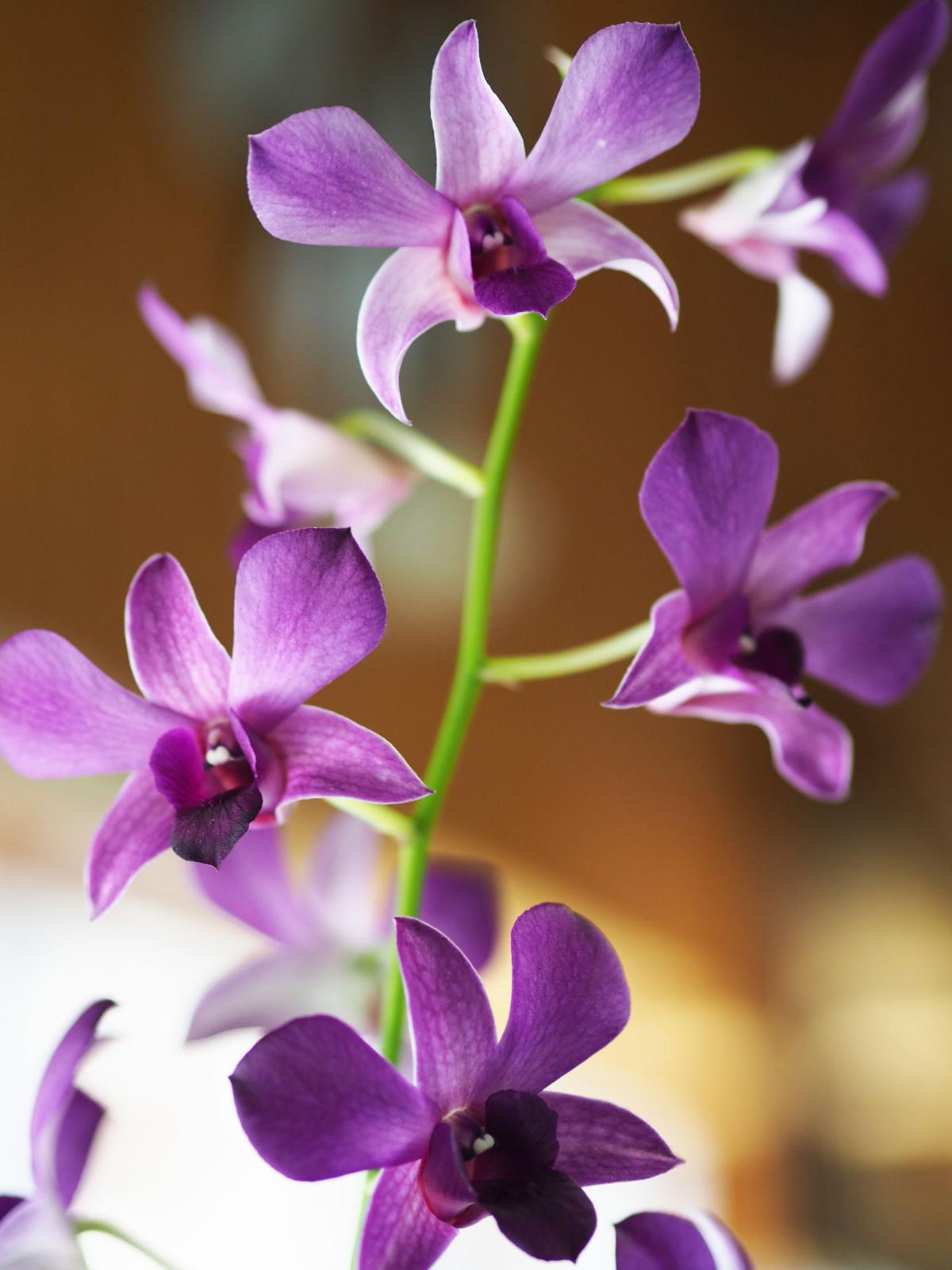 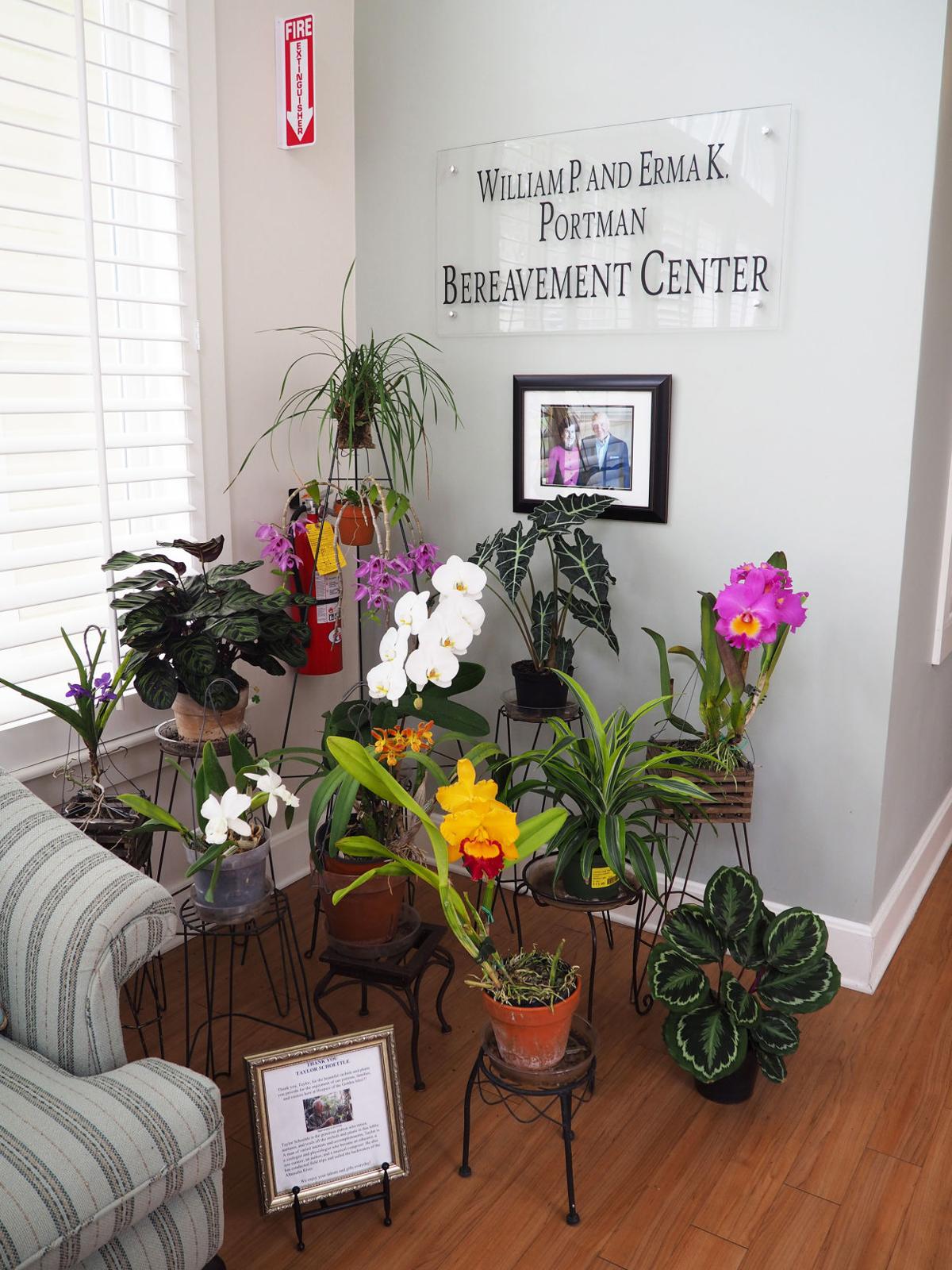 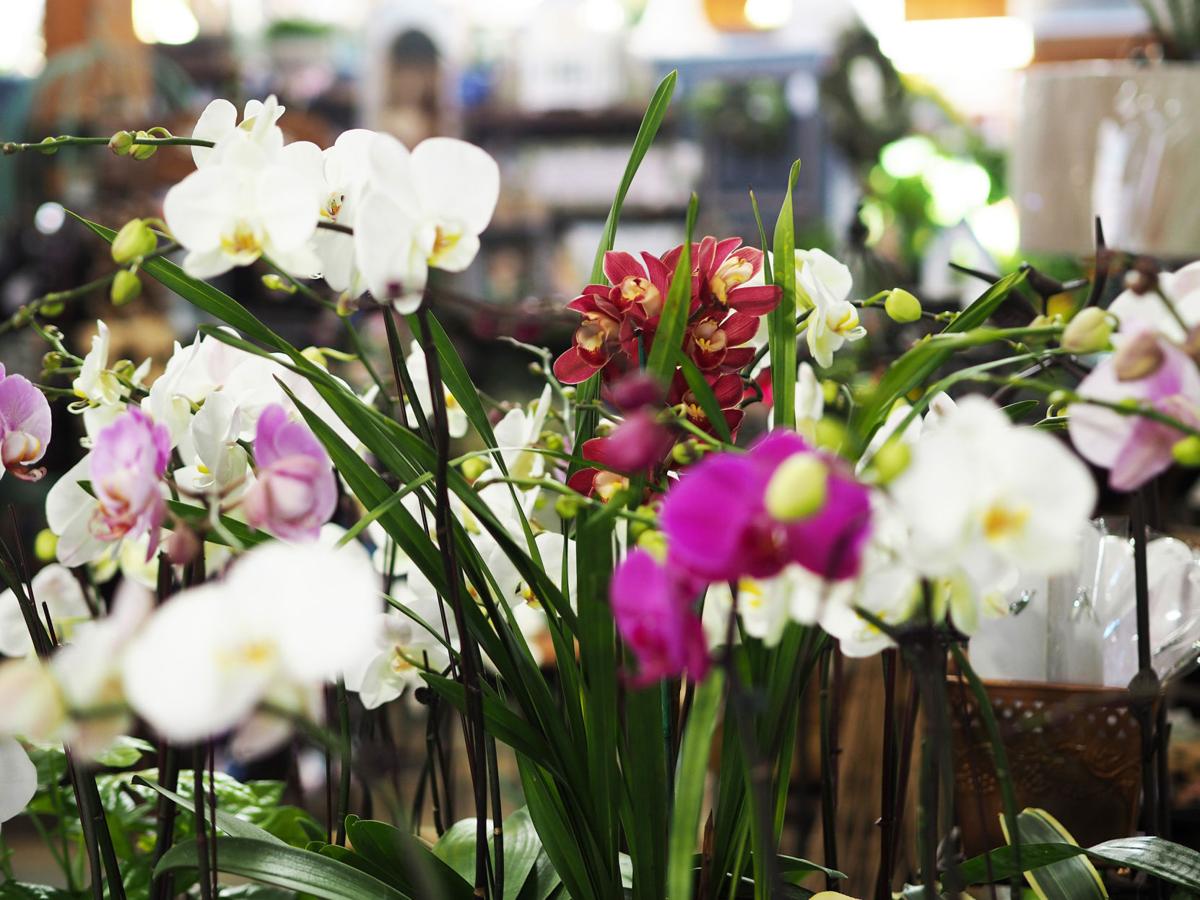 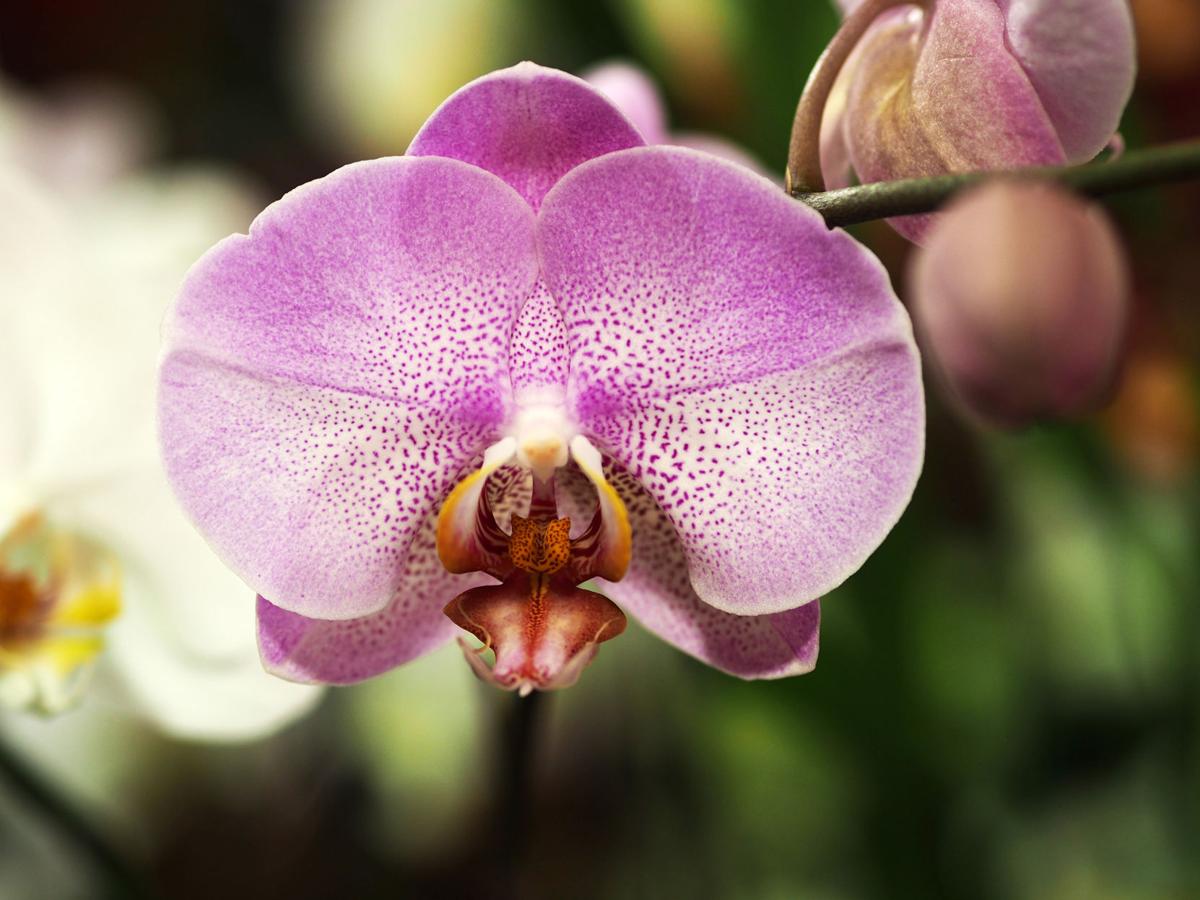 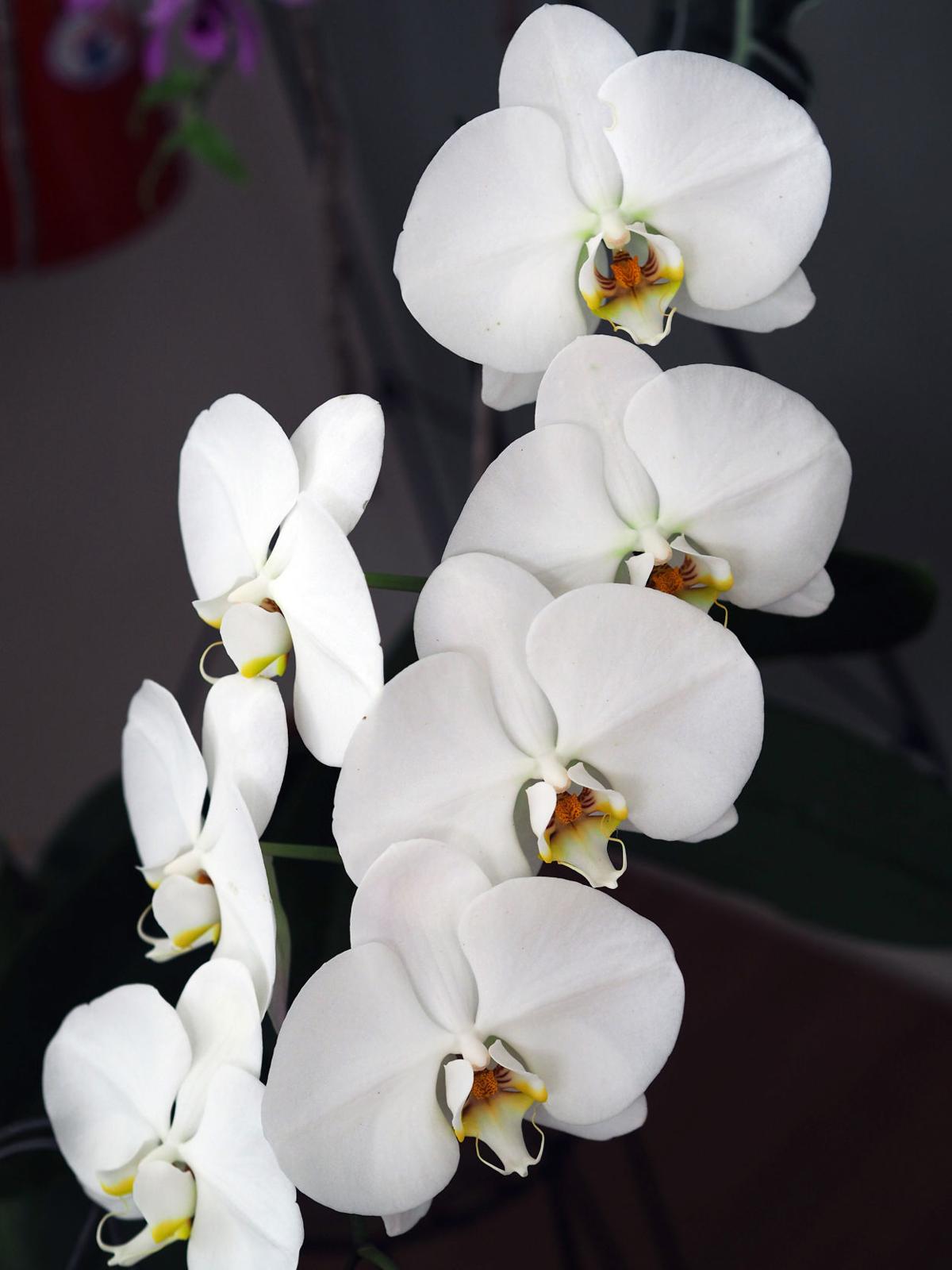 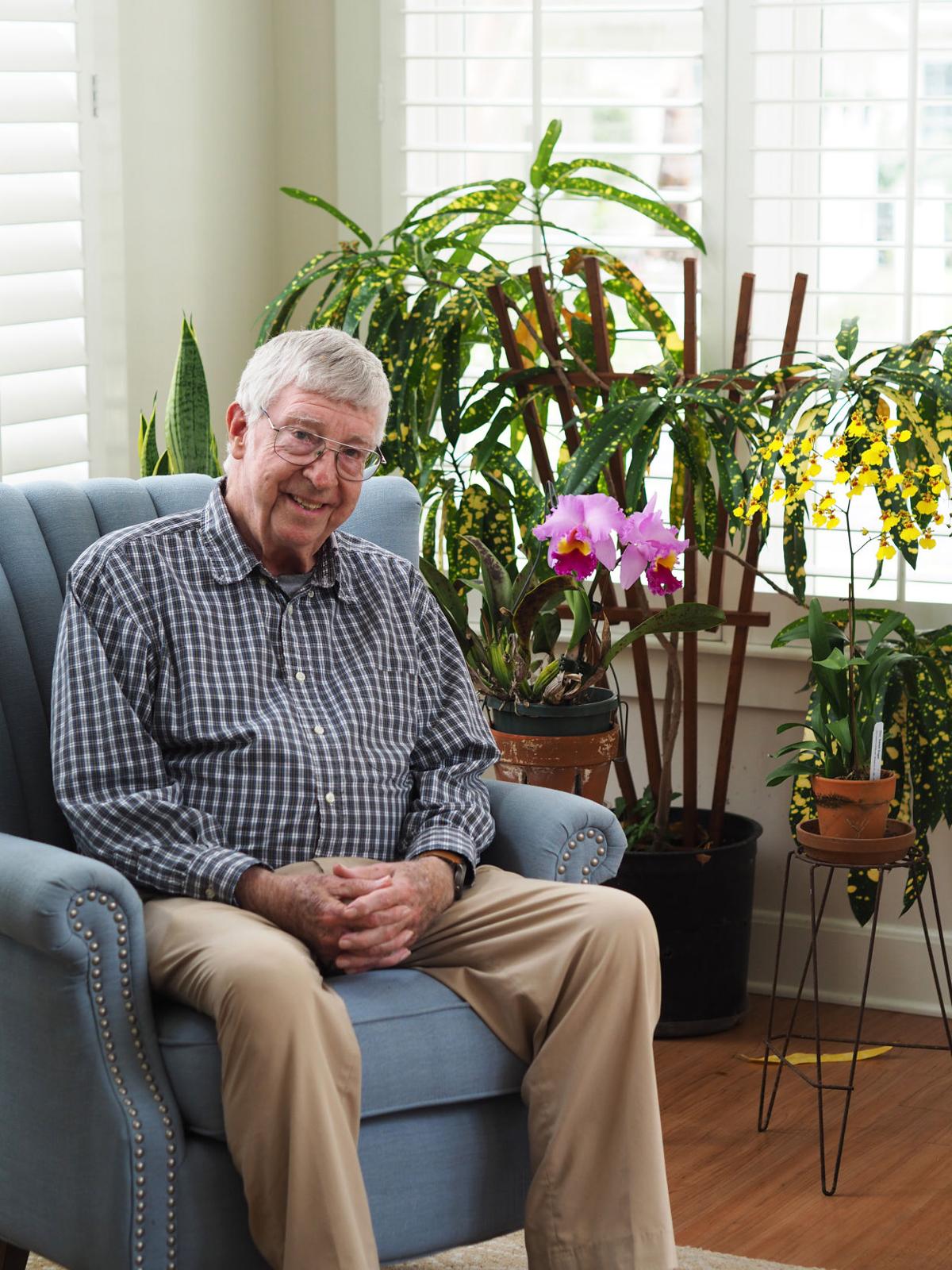 A bright array of phalaenopsis, cattleyas, vandas, dendrobiums, and oncidiums stand in pots and hang graciously from stands inside the lobby of Hospice of the Golden Isles. As visitors and staff walk by, one man gently pulls off dead leaves and tends to the plants under his care. Some may need repotting, others periodic fertilizing. Under his careful eye, the plants provide a beautiful landscape inside, where passersby often comment on the curated garden.

Taylor Schoettle has been traveling from Darien once a week to tend to the orchids at the hospice facility for the past six years. Throughout his career, he has been a zoo curator in Puerto Rico, a marine education specialist with the University of Georgia Marine Extension Service in Brunswick, and a biology teacher. And now, he is known as the Orchid Man.

“It’s just like people who collect coins or glassware or antiques. For me, it’s orchids,” says Schoettle, who first started displaying his plants at the Nativity of Our Lady Catholic Church in Darien for two decades before moving them to Hospice of the Golden Isles.

“I can’t have a greenhouse with orchids and not have people enjoy them,” he says.

Schoettle’s greenhouse, which he built with the help of his sons, is filled with different types of orchids, from the exotic cattleyas to the classic phalaenopsis. He has been known to travel to Jacksonville for the orchid show in March each year. “You will be fascinated by what you see. Oftentimes, I like the weird ones,” he says.

But Schoettle didn’t immediately jump into growing orchids after he was given one while living in Puerto Rico. His first love was reserved for heliconia, known as the lobster-claw, wild plantain, or false bird-of-paradise. “They are very rich in color … bright, brilliant; My God, they are just amazing. I took some with me, but they kept dying,” he says.

So he shifted his focus to orchids and found the species to be more resilient than most people believe. With the right care and dedication, he says, the plants can thrive. And for those that don’t seem to bloom, don’t give up on them. “I had a vanda that didn’t flower for years. Then, I put it in front of a window and, all of a sudden, it flowers. Last year, of the flowers I had, most were vandas,” Schoettle says.

Dawn Hart of Ace Garden Center on St. Simons Island enjoys vandas, too. “They are smaller, but their blooms are a true blue orchid; not one that has been dyed, which there are some,” she says. “You can get blues and dark, dark purples in the vandas.”

Hart often has a display of orchids at the front of her nursery, with new arrivals every two weeks or so. Classic white phalaenopsis stand in pots next to blossoming cymbidiums. Orchid hanging baskets near the entrance are ready to be filled with cattleyas or dendrobiums.

Hart often sees a spike of orchid purchases during wedding season and before the holidays. At a higher price point among the houseplants, orchids are often given as gifts, Hart says. “Typically, people don’t want to indulge themselves, so that’s why it’s kind of a special gift. It might not be something you think to do yourself,” she says.

In fact, Hart was gifted her first orchid, just like Schoettle was. For both, the plants proved to be more resilient than they first thought. “Don’t be afraid of them. Even though they are delicate looking, they are a pretty great, long-lasting, interior houseplant. There’s not many as refined and elegant looking as an orchid,” Hart says.

Many orchids are ephiphytic, which mean they can live on other plants — such as trees — and derive moisture and nutrients from the air. Because of this, their roots are often exposed. Orchid growers know not to trim the roots that may extend over a pot; it’s actually a sign the plant is healthy, Hart says.

Moisture — but not necessarily water — is critical for orchid care. “Part of the problem is that people hear ‘tropical’ and think they need a lot of water, and they drown them. A lot of times, the roots really need air to breathe more than water,” Schoettle says. Think of the Amazon, he explains. High humidity and a mist that covers everything is hard to mimic inside our dry environments here, which is why many serious orchid enthusiasts have a greenhouse.

Drainage pots are ideal to avoid drowning the plants. For those kept indoors, orchids can stay in the grower pot inside a larger pot; that way the water can flow out of the smaller pot without leaking all over the furniture, Hart suggests.

For those who want to keep orchids inside the home, they need to consider places that avoid direct sunlight but provide a lot of bright, indirect, or filtered light. Hart says orchids tend to do well in bathrooms, where steam from showers and baths can mimic the humidity the plants enjoy.

Watering amounts depend upon the type of orchid medium used — bark uses more than moss, which allows for more aeration. The ice cube philosophy says you can water an orchid with one ice cube, but the trick is divisive in the orchid community. “Our orchid supplier doesn’t like that ice cube philosophy. He says the ice cube kind of shocks it. So he’s not a proponent of it,” Hart explains.

Even under the best conditions, sometimes orchids can be a bit finicky. “It can bloom for three weeks and then you won’t see it at all again. It happens,” Schoettle says. To enhance the chance of respiking, Hart suggests you cut lower down the stalk, not near the bloom, and above a joint.

While tropical conditions are best for the majority of orchids, certain types can grow in northern climates or higher altitudes, including odontoglossums, masdevallias, cymbidiums, and miltonias. Generally, most orchids need to live in environments above 60 degrees. They can handle a brief cold spell but nothing sustained. Think of it this way: Orchids tend to like the same degrees that humans prefer.

“There’s usually a space in any household to accommodate them,” Hart says. “I think they are a special gift for someone who has everything. And they are also long-lasting enjoyment for the homeowner. I don’t think they ever go out of style.”

Phalaenopsis, sometimes called the moth orchid, is a popular choice for orchid lovers today. “They are more popular and some people find them easiest,” says Hart.

While there are a variety of colors, most phals in stores are usually white or purple. And the blooms are long lasting; under the right conditions, they will flower for a few months. “In an ideal world, if you buy one that is both budded and blooming, you should get two to three months,” Hart says.

For Schoettle, phalaenopsis is a personal favorite. “It’s probably one of the most elegant kinds … rows and rows of those faces, so broad, so expressive. It’s also one of the easiest to bloom,” he says. “I don’t want to say they have been cheapened because they are so common. They haven’t; no, they haven’t. And when I was first doing orchids, they weren’t common.”

Temps They can handle up to 90 degrees or as low as 60 degrees.

Water Don’t let them dry out. Potting mediums will determine how much water is retained; bark needs watering weekly whereas sphagnum should be watered when the top layer feels dry.

Light Low light or shaded areas are better. A key to look for are the leaves, which should be an olive green color. If they are darker, the plant isn’t getting enough light; if they have a red edge, they are getting too much light.

Cymbidiums, which usually have several blooms on the plant, are a favorite of Hart. “So many different colors; they are beautiful,” says Hart, as she looks over a large display of orchids at Ace Garden Center. On that day, she has cymbidiums in mustard yellow and deep crimson colors that stand out amongst the purple and white phalaenopsis nearby.

Water Keep moist throughout the summer, can lessen to barely moist during winter. Mist the bottom on the plant, not the blooms. “A lot of blooms themselves prefer not to be misted. Just around the foliage,” Hart says.

Light Strong indirect light during summer. The leaves can burn, so check for a medium green color.

Dendrobiums are taller options of orchids, and the smaller blooms aren’t the only eye-catching element. This orchid also has a cascading amount of foliage and roots. They also like to be in smaller pots, which enhance their height.

For Hart, she selects dendrobiums that have a lot of foliage — “that’s just part of it for me,” she says — and will use them in mixed arrangements where the dendrobiums provide the height and ferns can be nestled around the bottom. “If someone has a cachepot for the dining room table, just sitting one orchid in it doesn’t do much; but add plants around the bottom,” she says. “They can be potted in same pot. Some people will change things out and put them in their cachepot and then line the top with moss. That way, they can water everything individually.”

Temps They can stand a bit of heat, as high as 95 degrees, and down to 45 degrees at night.

Water Water more during summer months, when the plant is growing. Less so in winter.

Light Dendrobiums like a lot of light, just not direct sun.

These exotic orchids have striking blooms with a ruffled fringe on the flower. Like cymbidiums, cattleyas can be found in wedding bouquets and corsages.

The vivid colors of cattleyas create a beautiful spray of flora inside one’s home. Cattleyas tend to do well in pots, and they can even handle the light on a windowsill. But as an epiphytic plant, these species thrive best when air can get to their roots. “You see them in hanging baskets. You can really do some dramatic things with them on tall house plants and on the trunk of the trees, where you have them in little indentations in the trunk and have them in there and spritz them,” Hart says.

Cattleyas come in different sizes, from large to miniature. “I tend to favor the big cattleyas. I love the intricacies of the faces,” Schoettle says.

Temps Keep between 55 and 85 degrees.

Water The size of the plant matters in how often you water. Minis and seedlings will need to be watered more often, usually five to seven days, because they store less water in their pseudobulbs and roots. Larger ones can be watered every 10 days or so.

Light Light should be strong, but not direct. The leaves should be medium green, and the blooms should look healthy. If you are having difficulty with your plant blooming, it may not have enough light.