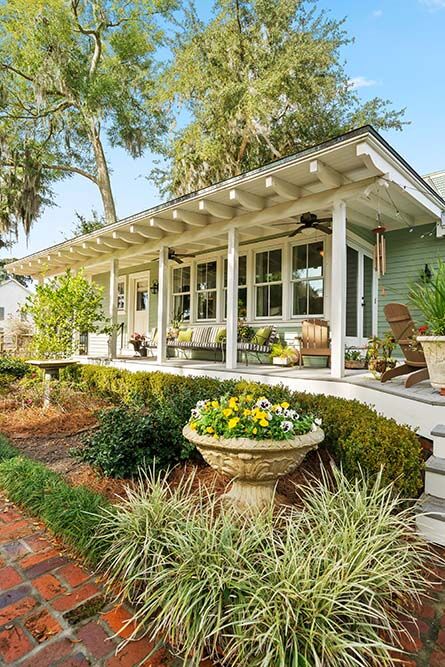 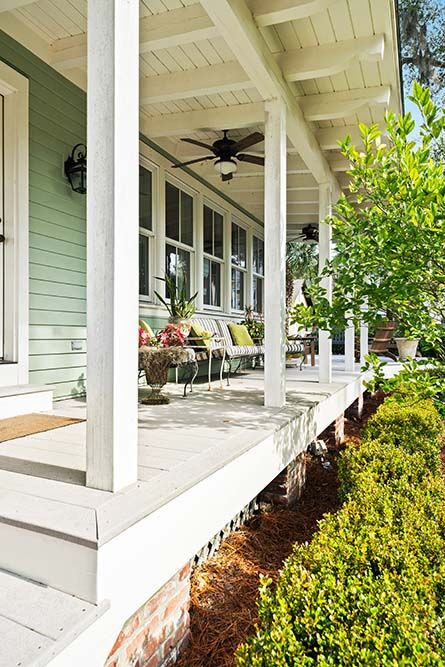 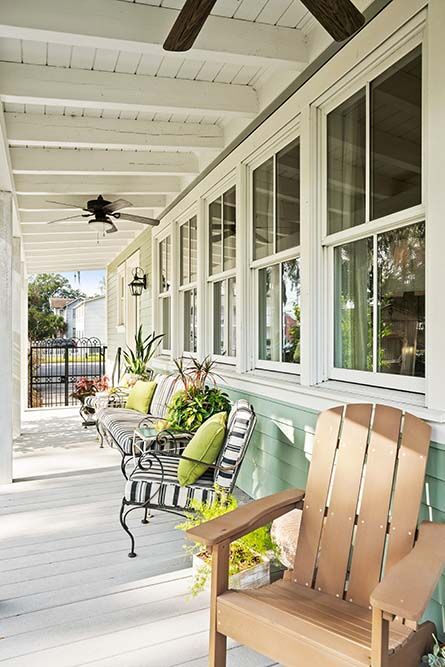 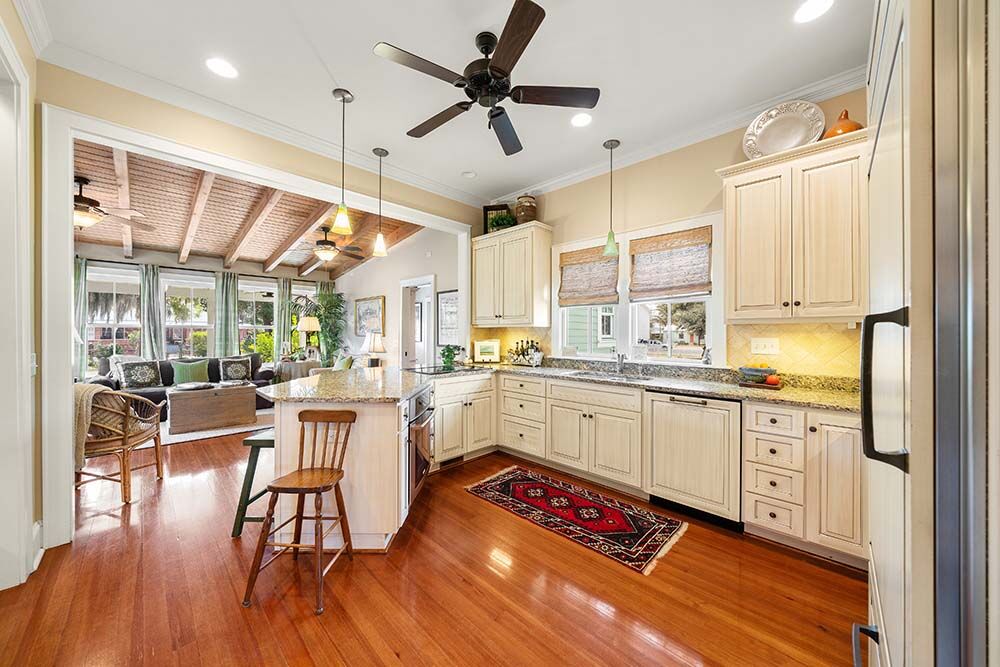 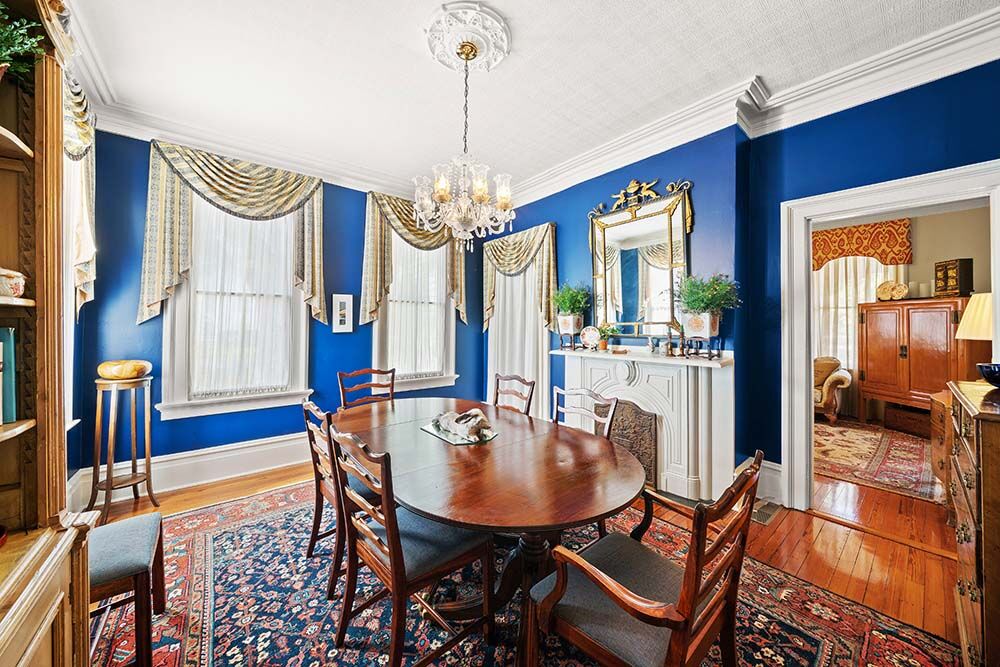 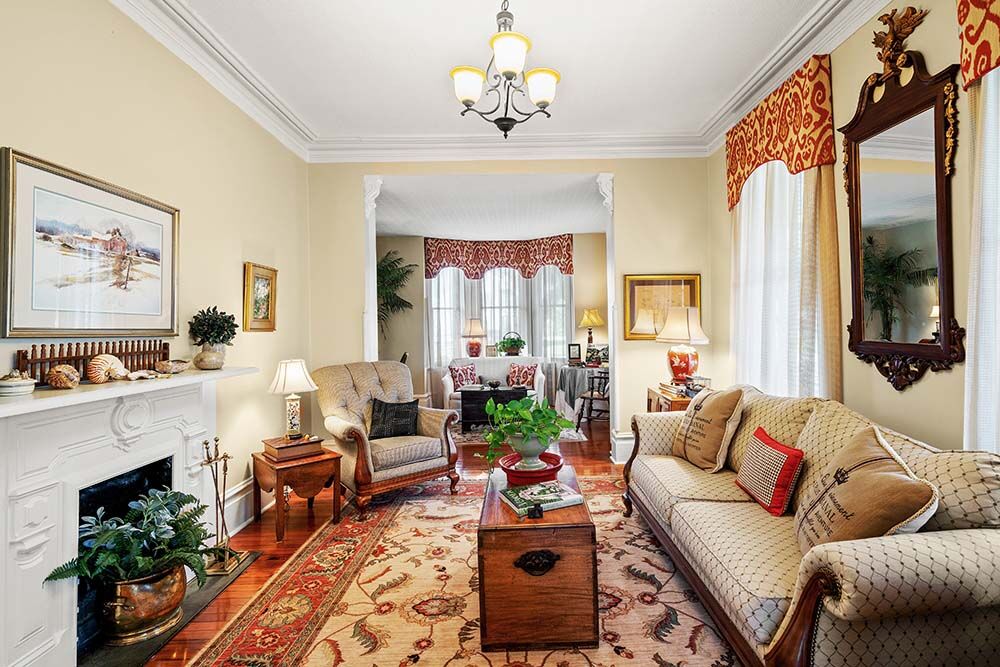 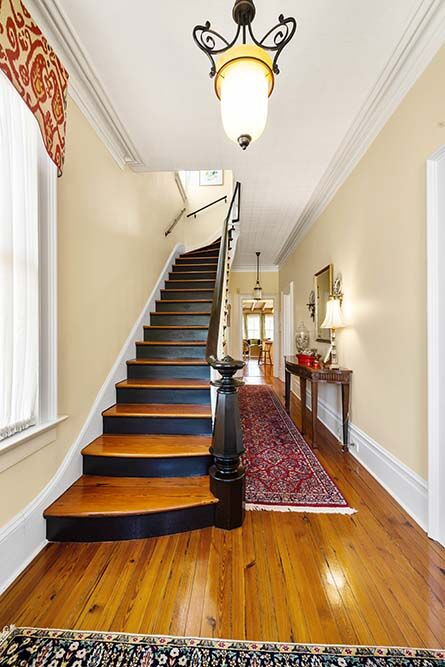 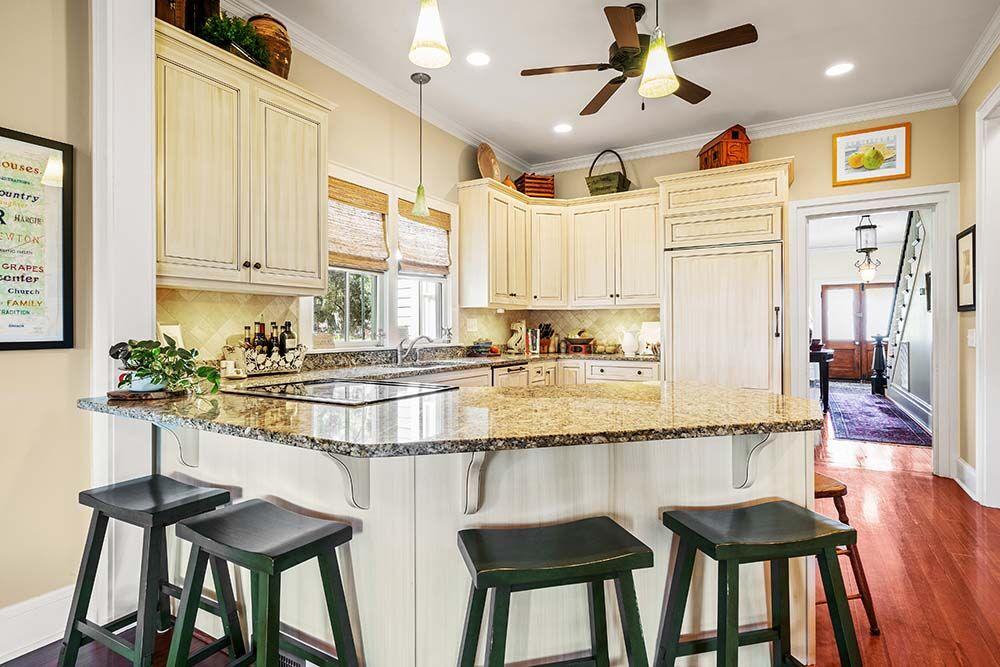 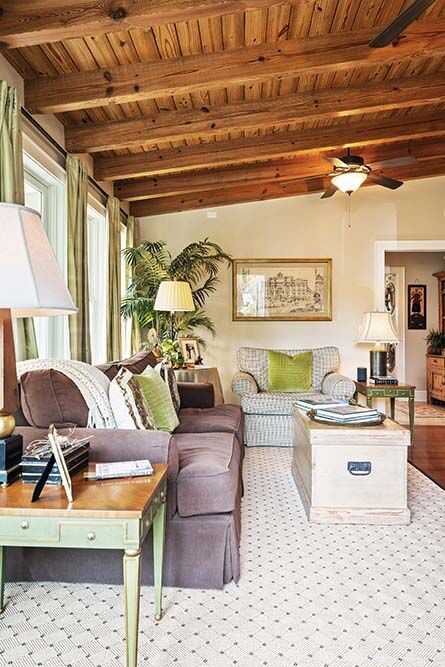 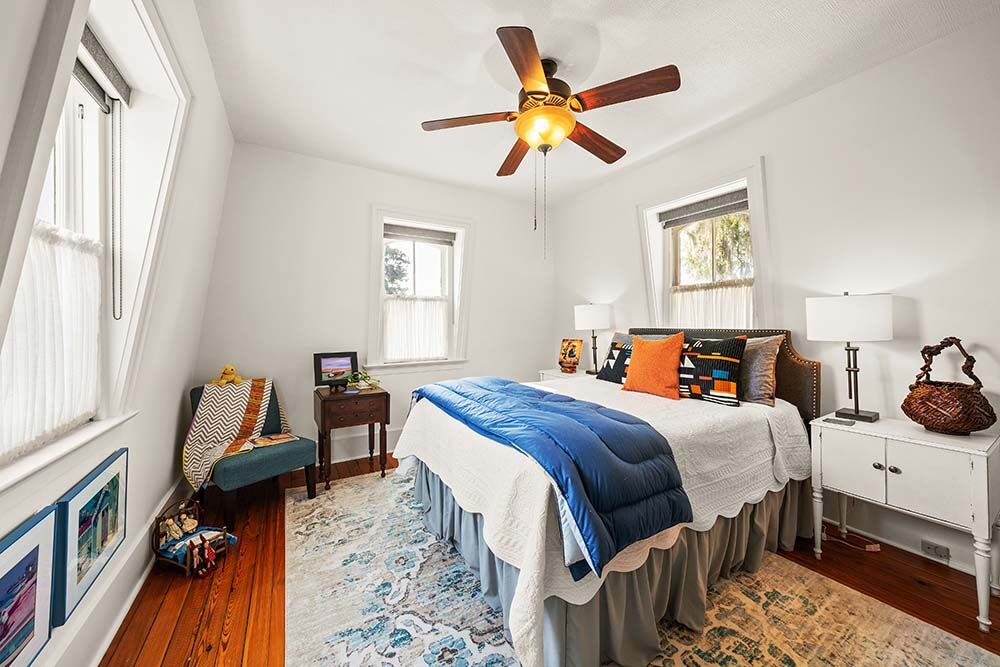 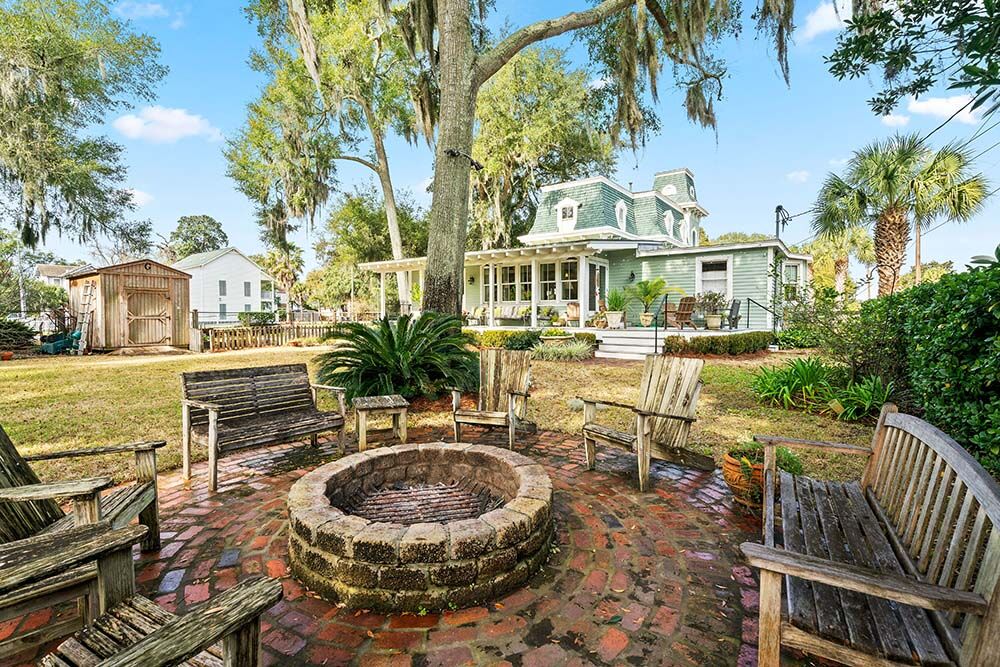 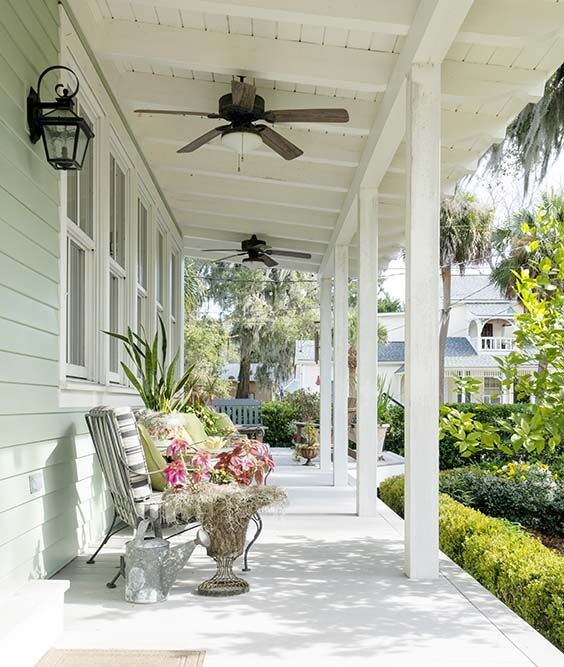 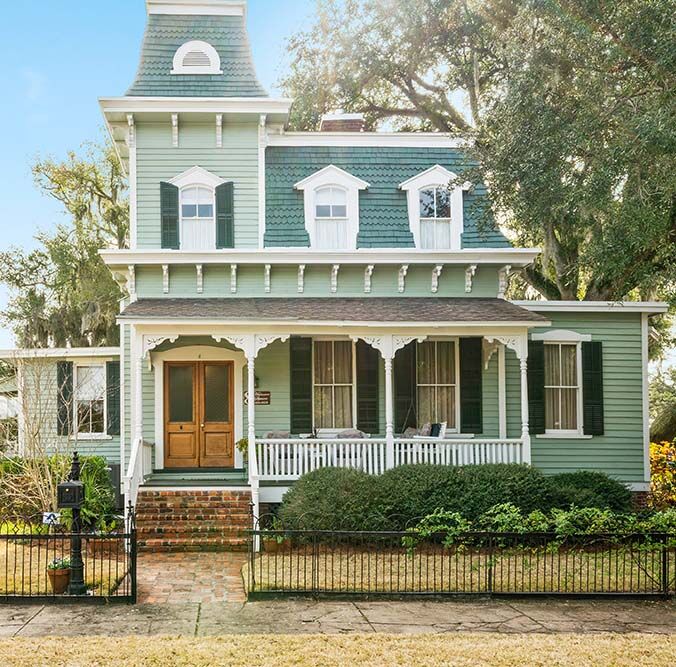 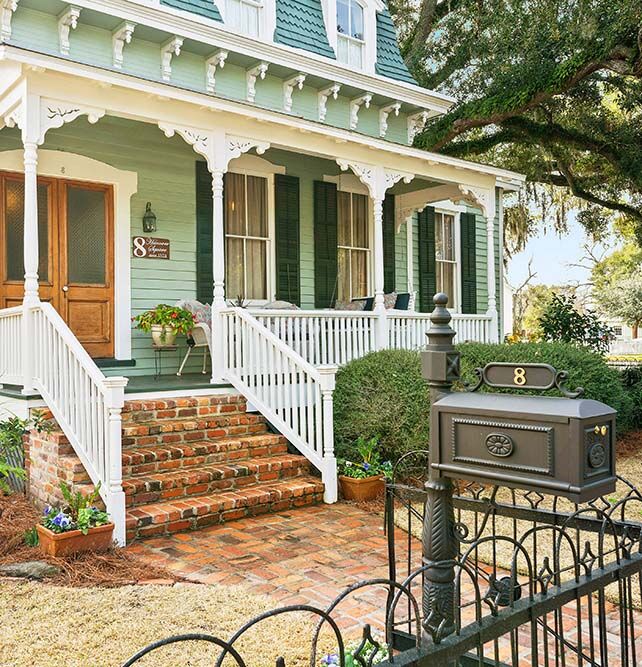 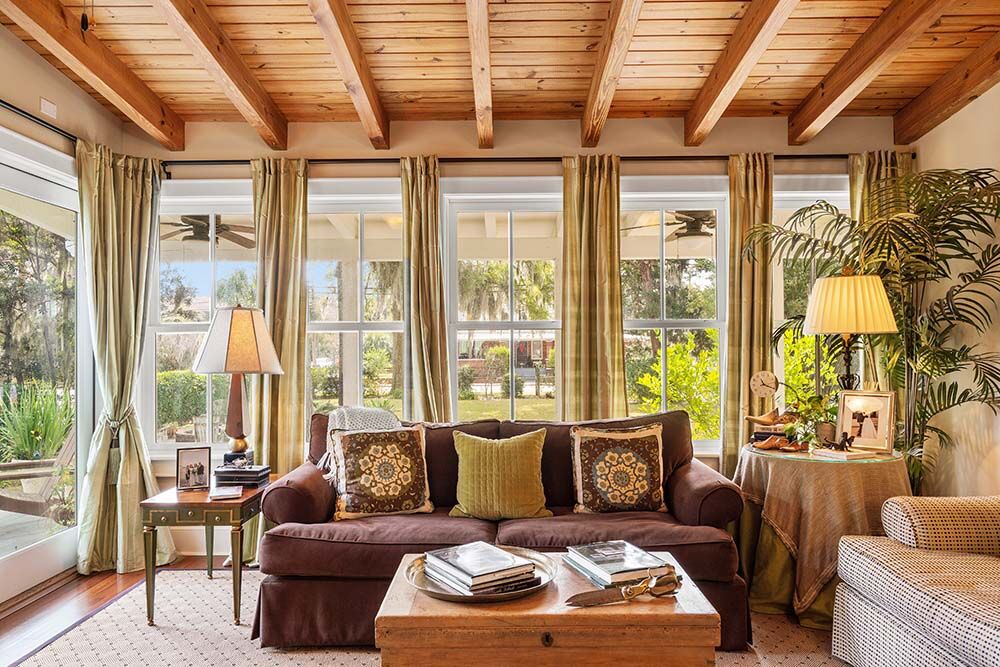 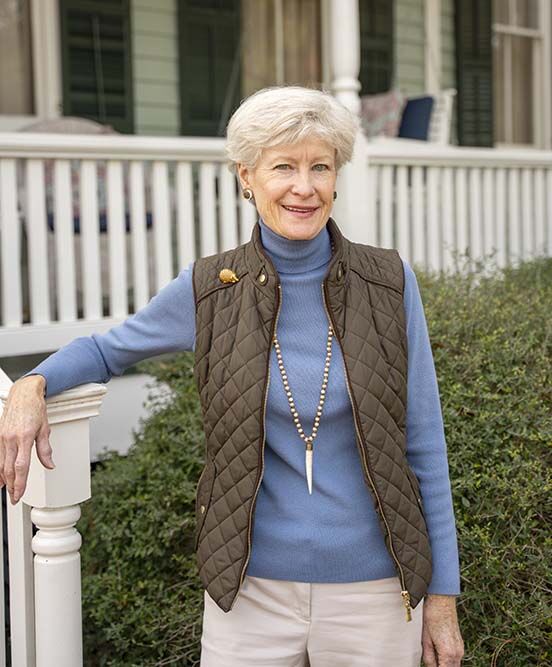 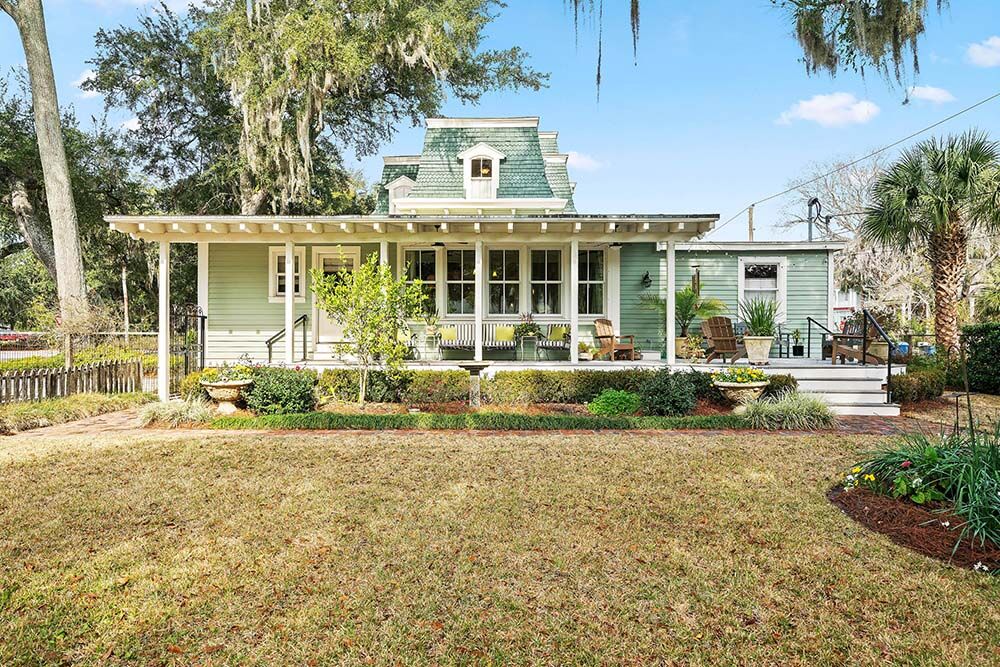 Julie Martin scanned her bookcase and pulled an album from the shelf. In the antiqued pages, there are photos upon photos of a stark white house. Martin turns the pages, gesturing to different images along the way.

“You can see the old wallpaper and the old kitchen,” Martin says with a smile.

The home in the pages looks very different from the one that the city commissioner’s abode today. But with the telltale architecture — the Mansard roof and the Second Empire features — that makes the connection undeniable, they’re one and the same.

“A lot of people who own these old homes will keep photo albums to share with the new owners when they sell them,” Martin says.

Her home, which perches atop Hanover Square in downtown Brunswick, has had fewer owners than many and that fact only adds to its unique history. It began with its construction in 1870 — or thereabouts. Martin notes that due to a fire at the original courthouse, the records were destroyed. But despite its actual birthdate, it’s safe to say No. 8 Hanover Square has been a beacon of Brunswick’s downtown historic district for roughly 150 years.

Often referred to as the Burroughs-Hazelhurst House, the home was erected by Dr. William Berrien Burroughs, a prominent physician and Civil War veteran. His family was a prestigious one. Burroughs’ maternal great-grandfather, John Berrien, served as a lieutenant in the First Georgia regiment during the Revolutionary War. In addition to being present at Valley Forge and earning distinction at the Battle of Monmouth, John Berrien’s father, also named John, was a Supreme Court justice. It was on the doorstep of the Berrien home in Somerset County, New Jersey, that General George Washington gave his farewell address to the Continental Army.

“The house was really held within the same family lineage from 1870s up until 1993,” Martin said. “It is actually County Commissioner Clyde Taylor’s family.”

She purchased the home from a lady who lived in No. 8 after the Taylors, acquiring the property in 2000. Martin was living on St. Simons Island and wasn’t even aware of the charm and beauty of the homes tucked away in the district.

“I had to deliver something (downtown) and I got lost in the historic district. I went ‘oh my gosh, I had not idea that this was even here.’ Then, I found myself coming over on the weekends to walk around or ride my bike,” she says.

Martin moved her family, which included her two small daughters, Marcie, who was 9 at the time, and Eliza, 5. They immediately took to the large home, sometimes called it the “Mary Poppins House.” Though there was a lot of work to be done to restore and customize the space, but Martin, a Realtor herself, was certainly up to the challenge.

“We were tearing up carpet and tearing down wallpaper. The girls were a big help with that. But some of the other things weren’t done until later, like the kitchen,” she says. “And for a long time, we would have to come downstairs to take showers because we couldn’t get hot water on the second floor.”

As the family started to make the antique house into their home, the children started to explore their new surroundings. Those memories are some of Martin’s fondest.

“The girls would get on their bikes and visit the shop owners. Peggy at Ned Cash would always take extra time with them to show them things. The shop owners kind of helped raise them,” she says with a laugh.

“But they really loved it here. They also would spend hours out back digging and rooting around looking for buried treasure — solider figurines, locomotives, and other relics left behind by Clyde and his brother, Joe. There was also an array of pieces including coin slots, vinyl 45 rpm records, painted lightbulbs, and other assorted items from the old juke boxes and vending games that their dad owned.”

The little girls would even open a “museum,” letting their friends and neighbors view their finds for an admission price of 25 cents each. Like her children, Martin also started to immerse herself more and more in the community.

It began when she started asking questions about the defunct fountain in Hanover Square. That was the beginning of Martin’s career in public service. Not only did she petition the city to revitalize the fountain, she also took on the charge to revitalize all of Brunswick’s dilapidated squares through a program she founded called Signature Squares.

“We had the dedication of the fountain and the landscaping July 4, 2006. I do the fundraising, the grant writing and Jerry (Spencer) does the landscape design and cost estimates. We’ve partnered with the city,” Martin says.

“We’ve done Hanover Square, Jekyll Square, Machen Square ... and there’s two sides to each of those. We’ve done Blythe Square. We’ve done two of the quadrants of Queen’s Square. The third quadrant is under construction, and Wright Square is on the radar.”

The rebirth of the squares has helped add to the overall revitalization effort taking place in downtown Brunswick. Martin was elected to the city commission in 2012 and has continued to spearhead growth in the district. And she’s inspired by what she’s seen taking shape in the area.

“Of course, there’s a lot to be done still. We have a lot of owners who don’t take care of their properties, and we’re working on ordinances for that now,” she says.

“I think there’s a lot of great support in the community. The brewery has certainly helped a lot. There’s a lot of interest in downtown. But I think we want to make sure we maintain the quaintness of our community and don’t have too much growth too fast.”

Some of the Martins’ favorite home features:

• The original newel post and open stairs that gracefully curve at the top, illustrating the craftsmanship of the design.

• The view from the picturesque double doors that leads out to the backyard, which includes a raised vegetable garden.

• The stylistic overhanging eaves below the Mansard roof and decorative brackets with acorn finials.

• Original wrought iron fencing that envelops the yard, which was restored and returned to its place.