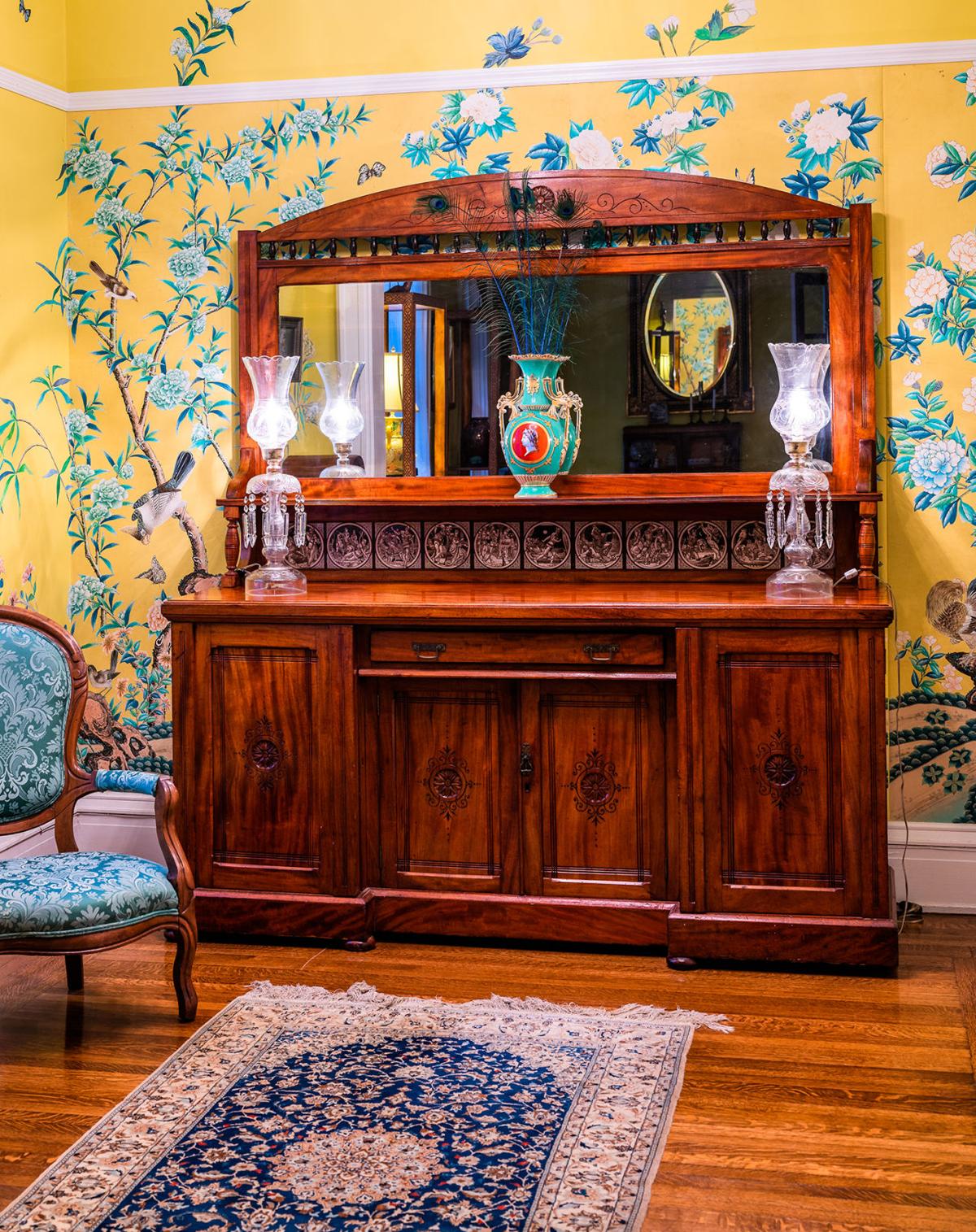 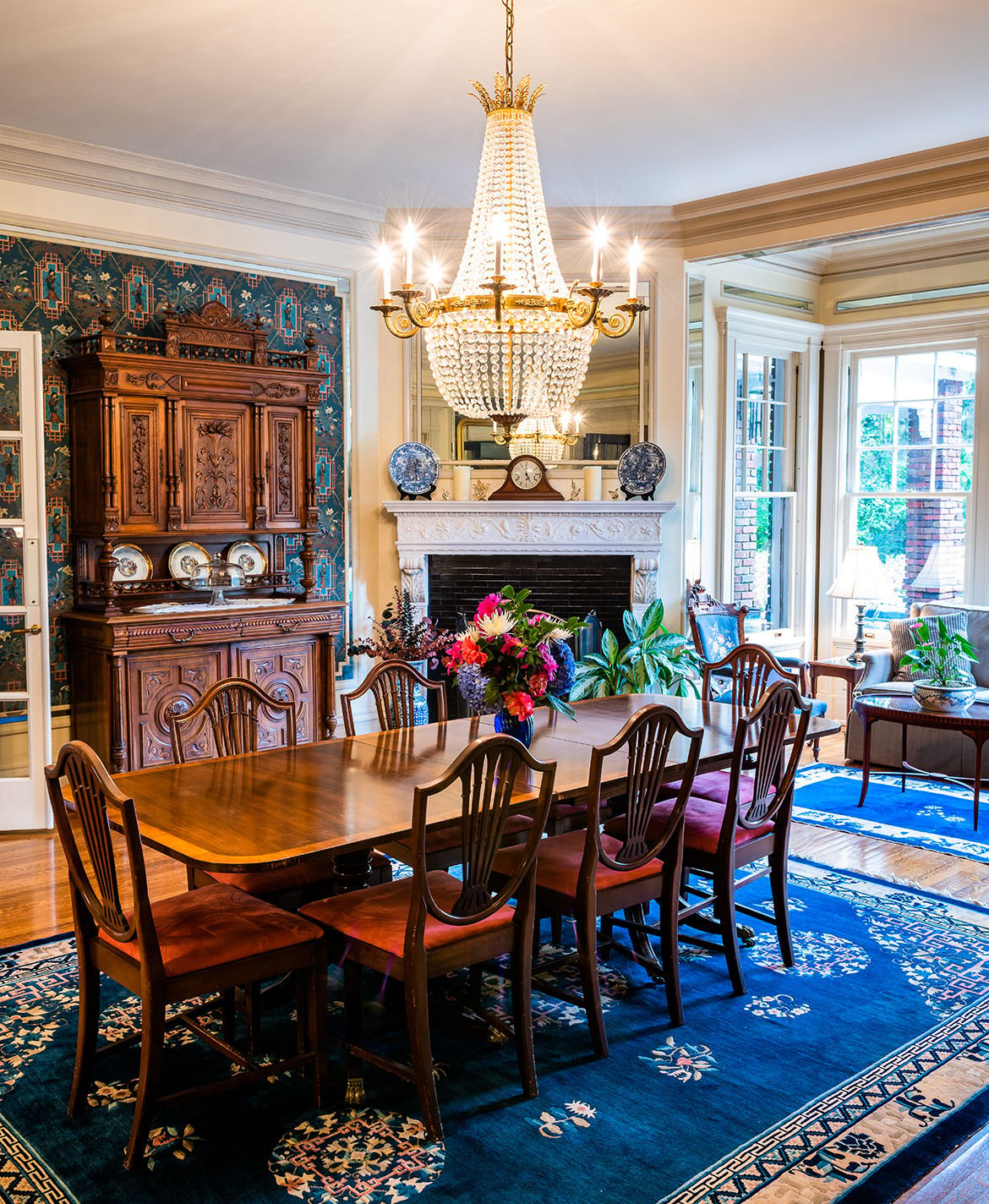 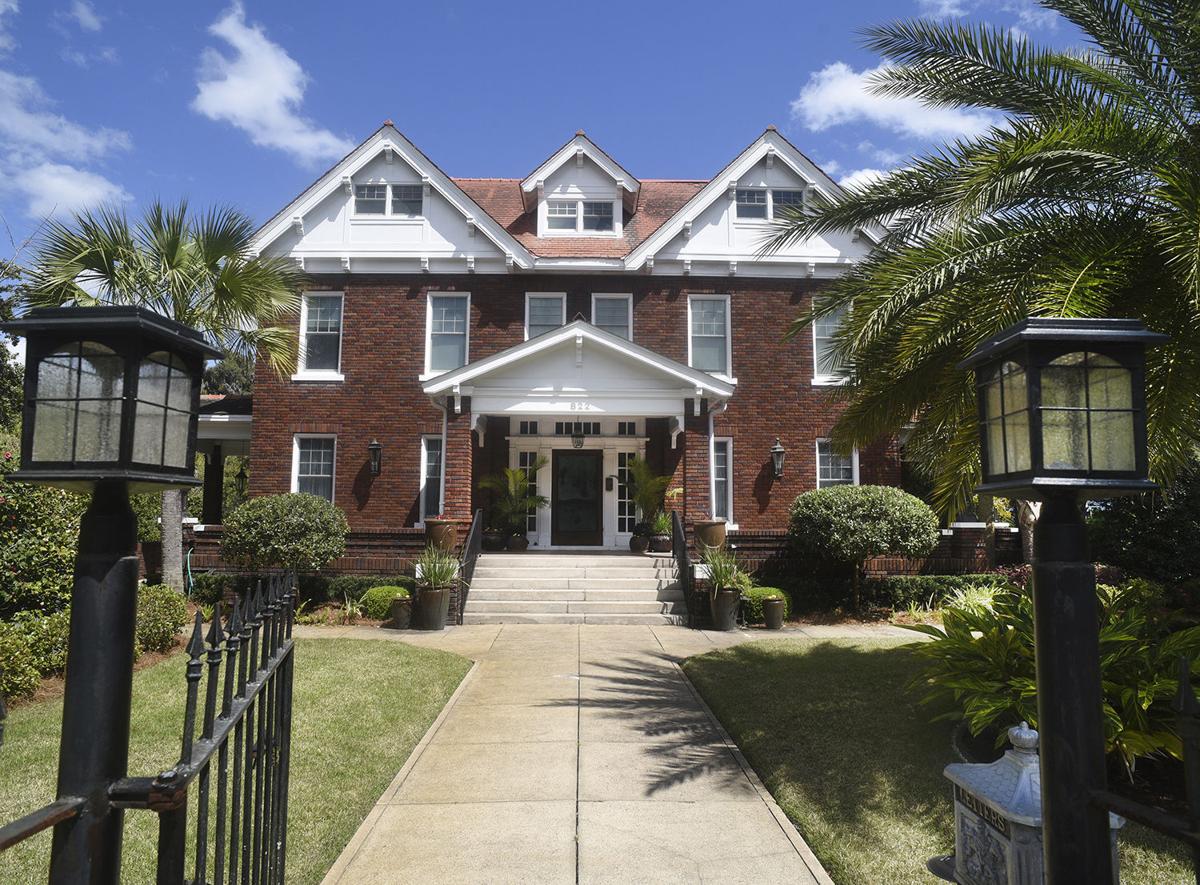 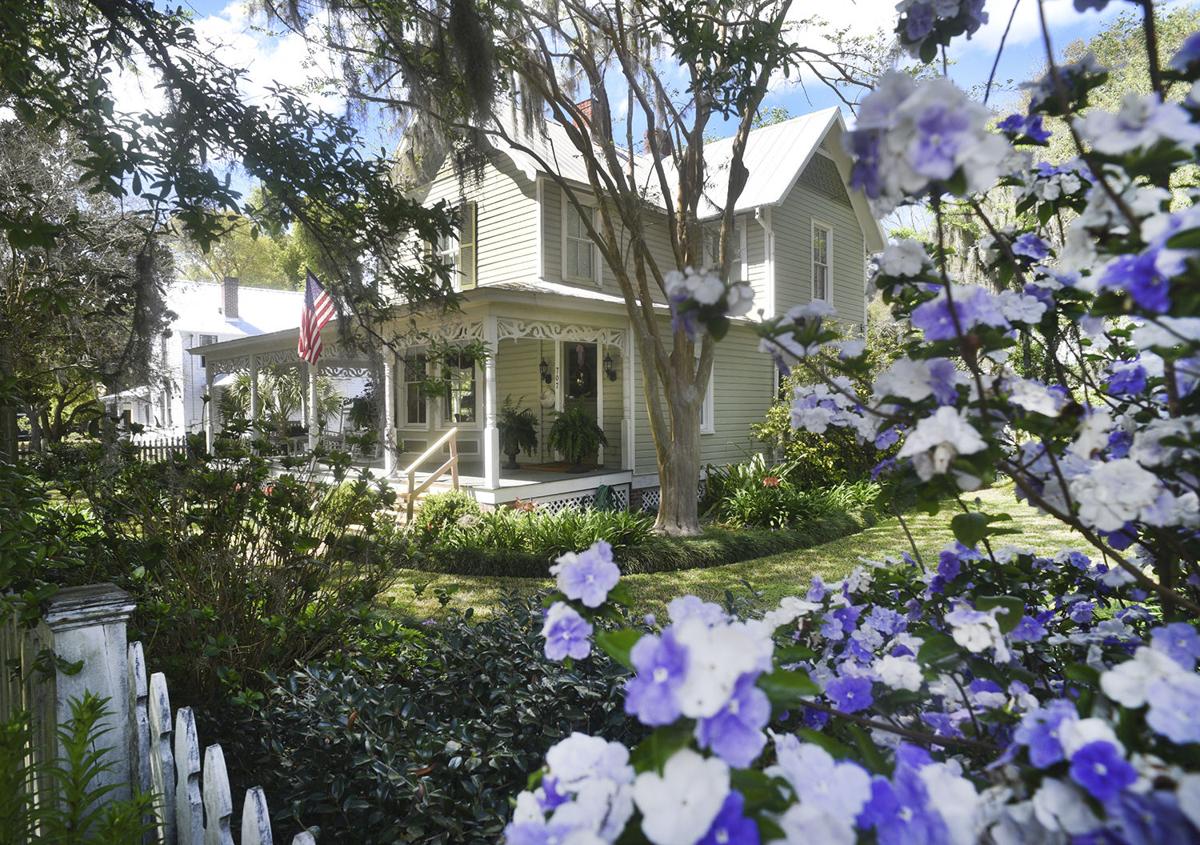 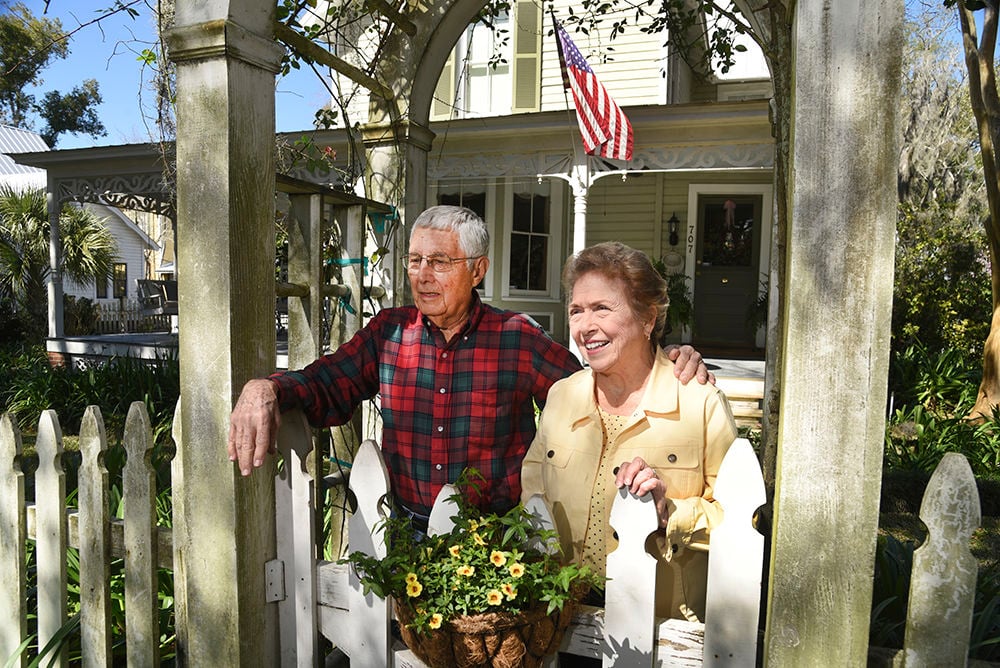 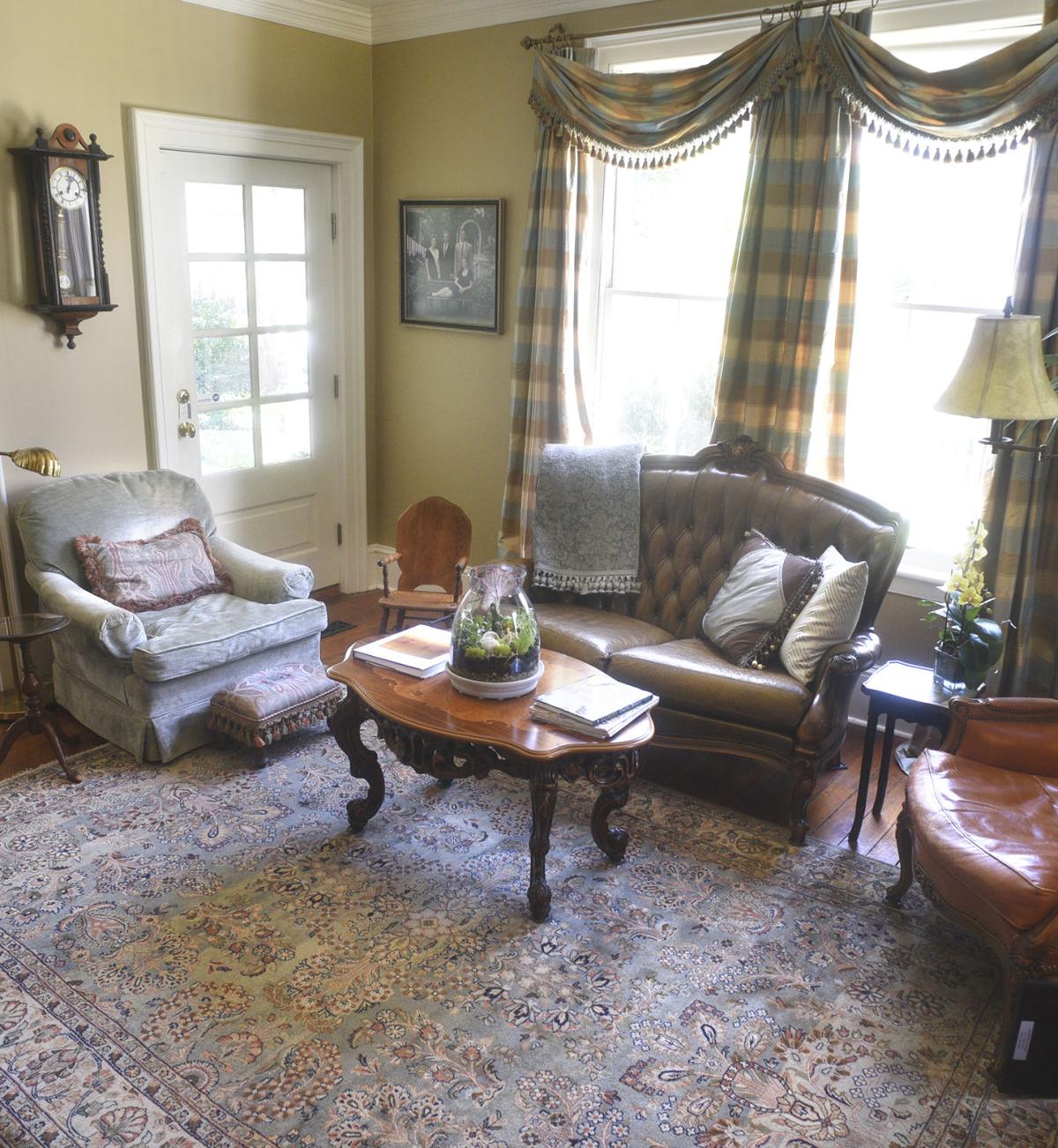 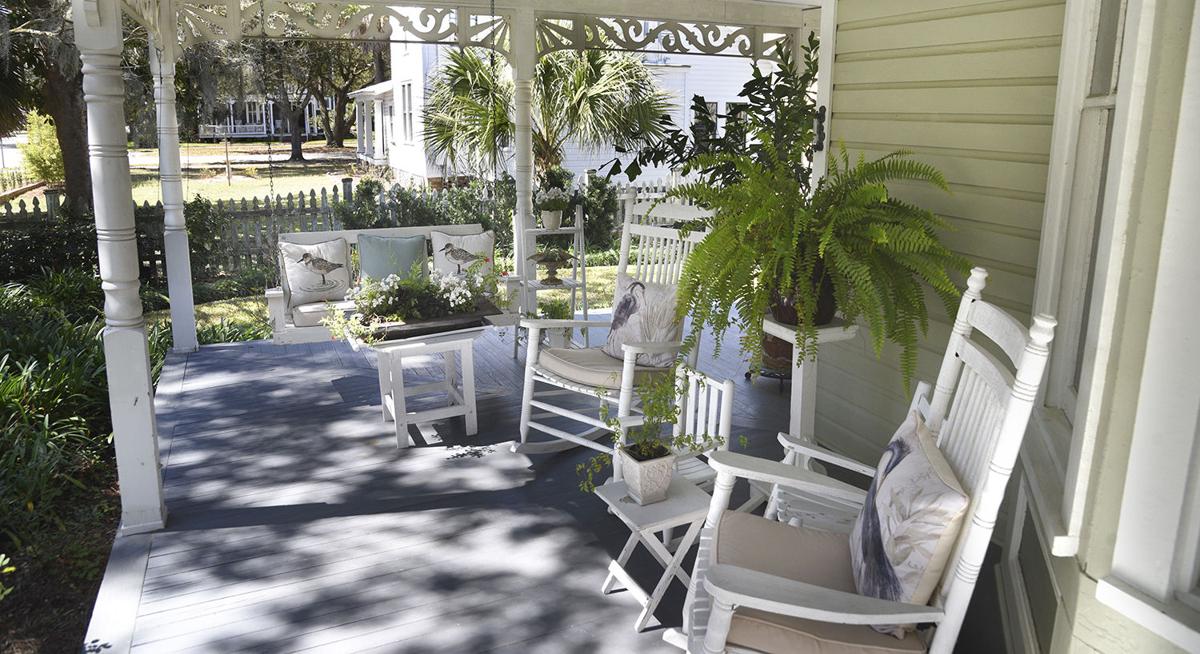 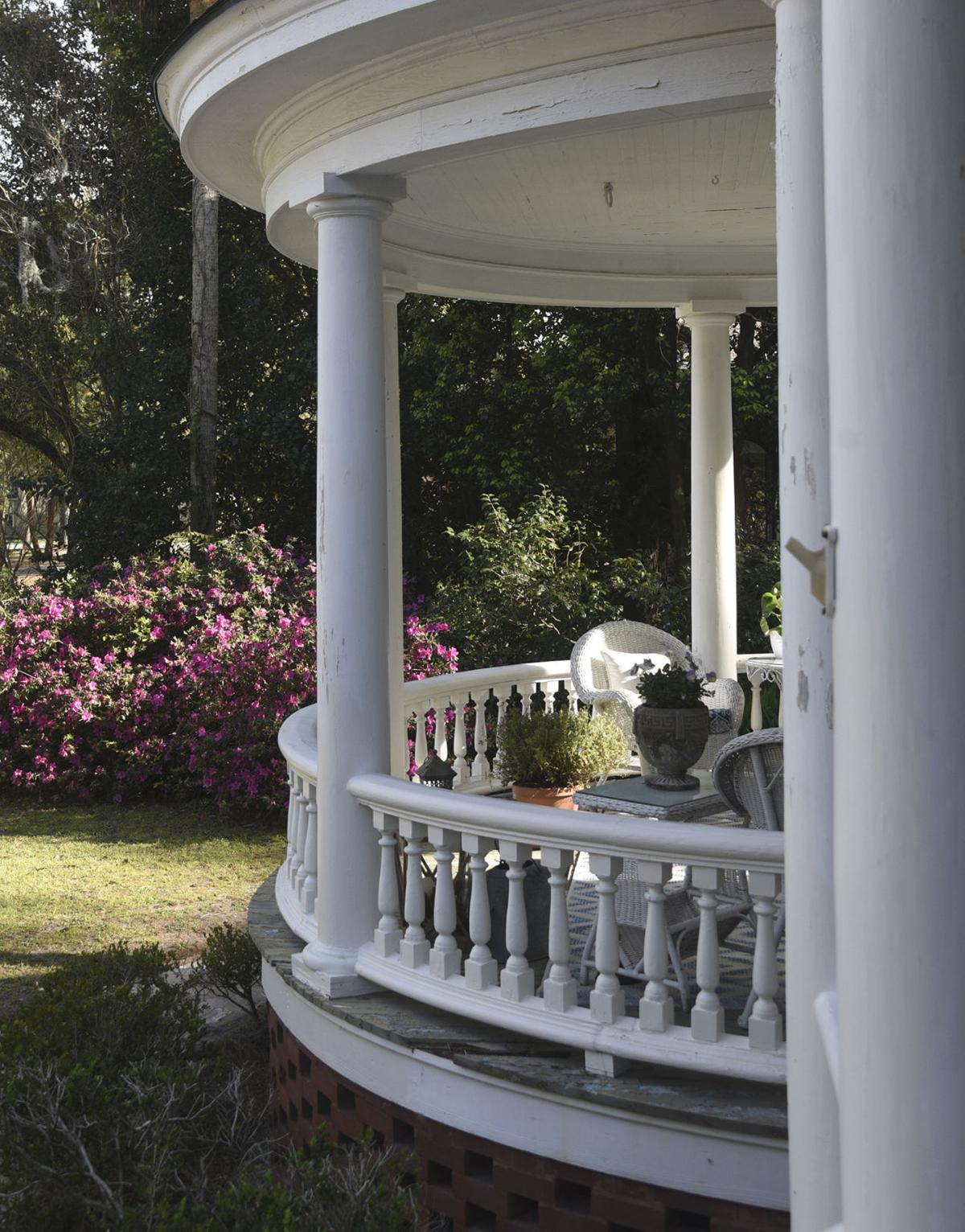 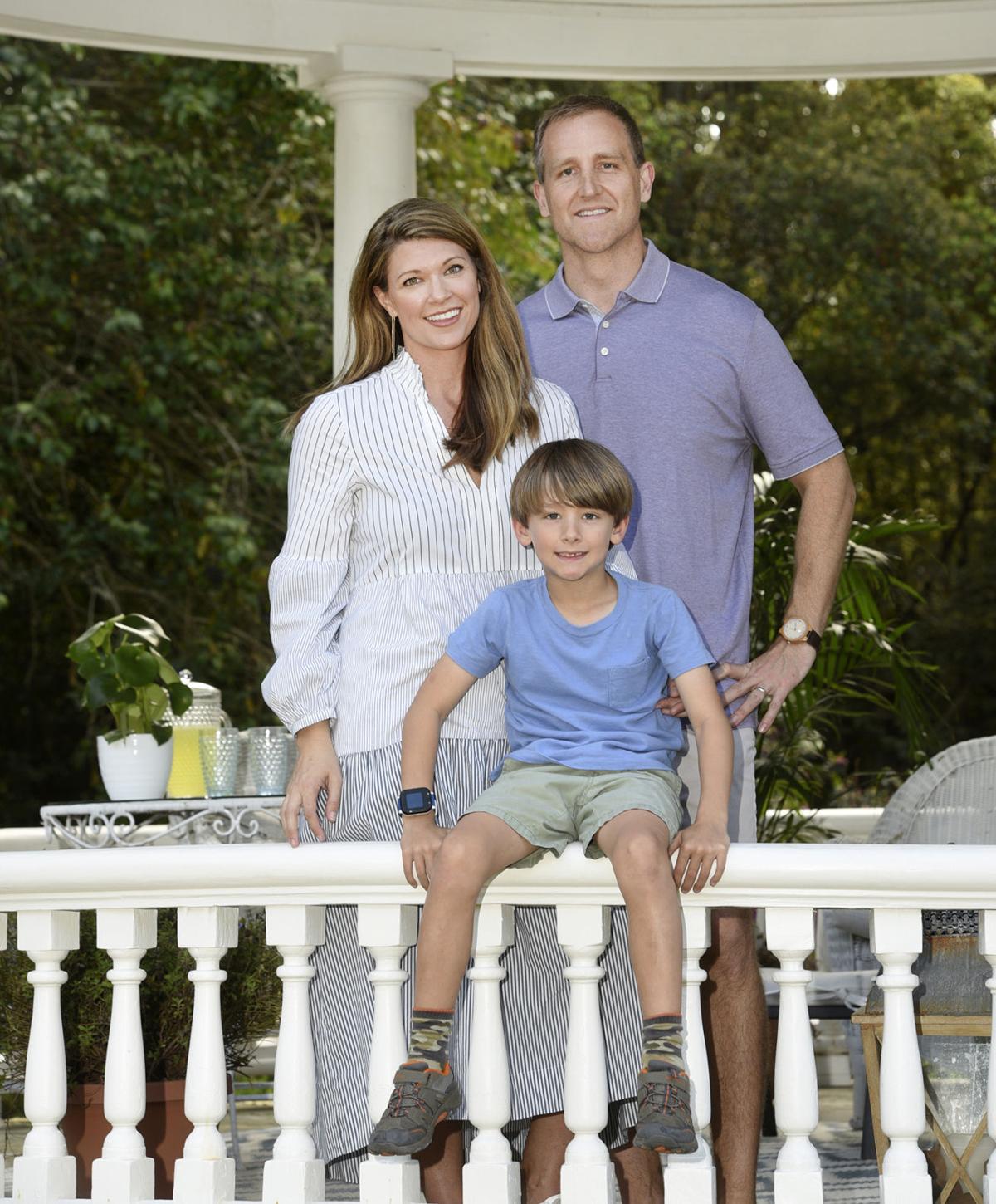 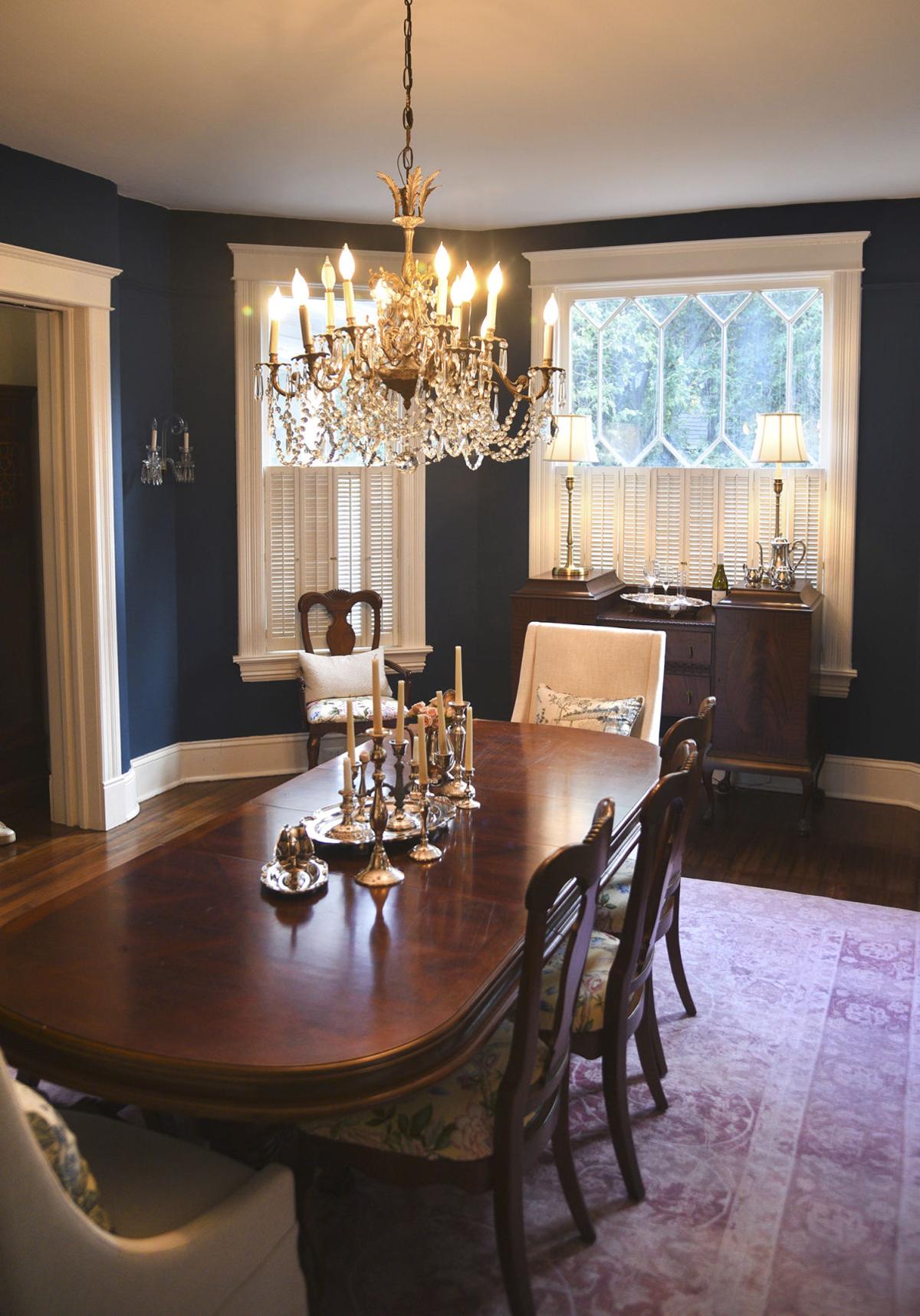 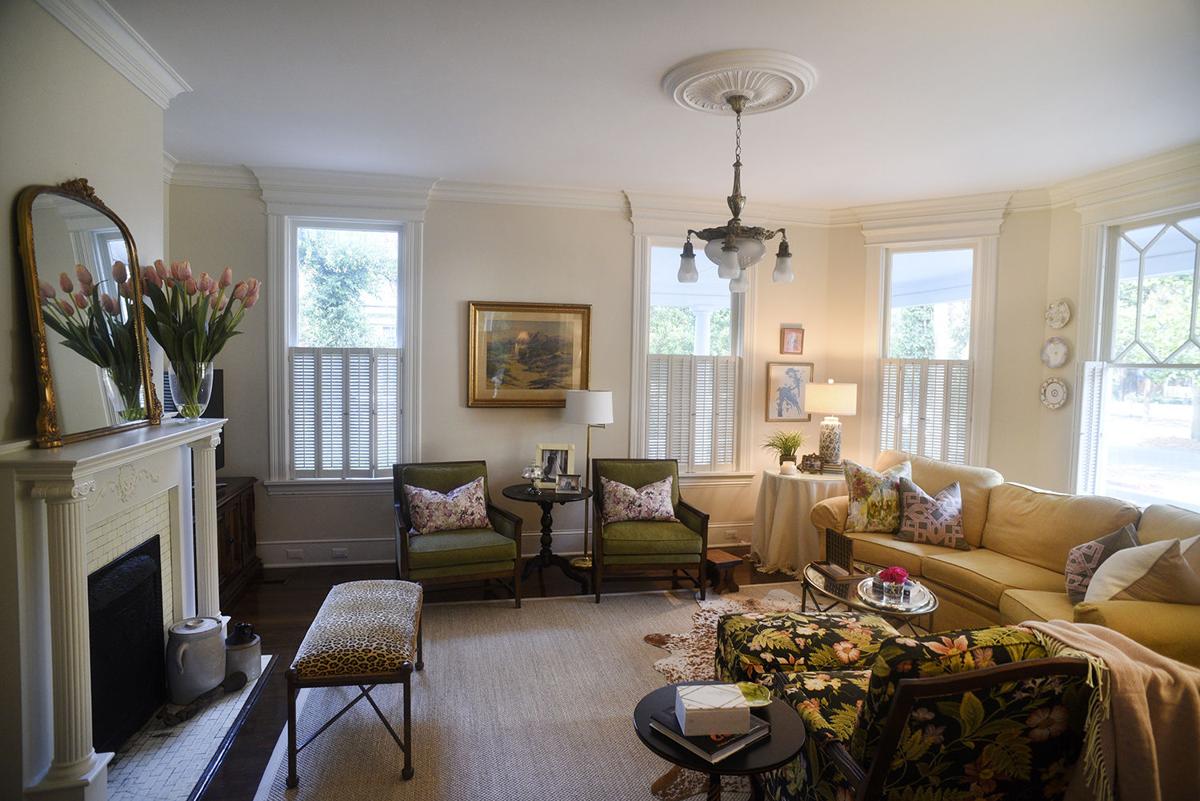 Driving down the moss-laden streets of downtown Brunswick, it’s easy to be transported to the past. Majestic homes of a bygone era stand as testaments to another day and time.

These properties, situated within the popular, SoGlo or South of Gloucester area, are filled with countless stories of the lives that have unfolded within their walls. It’s this link to the past that has served as a major draw to those who’ve purchased and refurbished these homes. Of course, the work is often painstaking, proving to be a true labor of love. But for those up to the challenge, it’s an opportunity to combine the past and the present in their own downtown dream home. The following residents have realized that goal, while emphasizing the charm and character of Old Town.

This expansive property was once home to one of the city’s most colorful personalities — Captain Frank Duncan MacPherson Strachan. The heir to a shipping fortune, Strachan was the first millionaire to live in Glynn County and operated a vast commercial empire that included steamboats and trolleys, among a myriad of other ventures.

Strachan and his wife, Mary, erected the home in the Queen Anne style in 1902, but later converted the structure into an English vernacular design. Outside, they created sweeping gardens featuring fruit trees, berry vines, and flower bushes. Some plants, like the Heritage Camellias, date back to Strachan’s time.

The family raised four children in the home, with an impressive menagerie of animals — 27 dogs, a parrot, and a monkey named Koko. This venerable jungle wasn’t Strachan’s only eccentricity. Among his many properties, the old sea captain also owned a beach cottage on St. Simons Island. When Strachan was denied membership in the exclusive Jekyll Island Club, he would enjoy a glass of Scotch, while firing a canon from the lawn of his island property in the direction of the millionaires on Jekyll Island. The fiery Strachan suffered a heart attack and died at the mansion on Christmas Day in 1931.

For the Galloways, who previously owned the historic “Gingerbread House” in Savannah, Strachan is very much a part of the home’s present. Many elements, some subtle and some bold, help to keep his memory alive. The couple displays his actual travel trunk, compete with his initials, in an upstairs bedroom and several unearthed Scotch bottles in the butler’s pantry downstairs.

“They may have been left by the workers, but we’re glad to have them,” Herb says, taking a bottle from the shelf and turning it in his hands.

They also have more permanent features in the home courtesy of Strachan. In the great room, he had a 15th century fireplace imported from a castle in Florence, Italy. But the Galloways have added their own stamp to the historic home.

While many of the fixtures are original, they have incorporated found-pieces, such as a light fixture from an old Charleston theater, into the home.

“Since we have lived in historic homes, we had a lot of the things — the furnishings and whatnot when we moved here in 2013, but we’ve also added some things over time,” Jan says.

One of those is the piano in the great room or ladies’ parlor. Herb, a celebrated pianist, purhased the instrument, which is made of a now-extinct English burlwood and dates to 1862.

“I just had to have it,” Herb says with a smile. “It was manufactured by Collard & Collard of London and is one of the first pianos made in this grand piano shape.”

For the Galloways, living in the home is a way to connect daily with those who have gone before them. They’re also excited to be a part of the home and city’s future.

“We love living here. There are so many wonderful and diverse families … we really love downtown Brunswick,” Jan says.

The Spencers live just a few streets over from their friends, the Galloways. The now-retired Sea Island landscape architect and his bride have enjoyed the home, built right around 1900, for 30 years.

Throughout those three decades, they’ve poured their hearts and souls into the property, refurbishing everything from floor to ceiling — much of it with their own hands.

“When we got the house, we knew that we were going to spend years working to get it looking good,” Jerry says.

They’ve certainly done that. From installing a new kitchen to hand-stripping the floors and rebuilding the wraparound porch, the Spencers have taken great care to make sure the home is a credit to the neighborhood they love. They’ve replaced original wood with salvaged pieces from a local company, Unique Building Products.

Their work on the home was so impressive that the crew of the Ben Affleck film, “Live By Night,” approached them about using their home in the movie.

“They really wanted it, but they were going to have to change everything … repaint the walls and all of that. And we wouldn’t have been able to come back to the house for months, so we decided that it wasn’t worth it to us,” Jerry says.

The inside of the home remains true to the period while offering a cozy respite, but the lush gardens the Spencers have created takes the property to the next level.

“I tried to use plants that are from that time period,” Jerry says.

The yard is filled with trees and colors that would have been familiar to the original owners. It includes Saucer Magnolias, Day Lillies, and Angapanthus or Lily of the Nile. They also have several citrus trees on the property.

“The blood orange is my favorite,” Nora Sue says.

While the Spencers have been Old Town residents for years, they’re more encouraged than ever before by the vibrancy of their beloved neighborhood.

“It’s a great community. We’re excited about the diversity of people that are coming into the neighborhood — young families and individuals — who really love downtown,” Jerry says. “The real estate market here is more healthy now than I’ve ever seen in our 30 years here.”

The Lockwood-Dubignon house has been a downtown landmark since it was erected in 1896. It was originally occupied by ancestors of the founders of Jekyll Island, the Dubignon family. Later, it was the home of owners of a Brunswick pharmacy.

For Jim and Stephanie Jacobs, the history of the home was one the many draws, along with an expansive yard, great upkeep, and exceptional neighbors.

Seated on the circular porch at sunset, the couple watches as their seven-year-old son kicks a soccer ball in the side yard. While some used to equate the area with more mature residents, the Jacobs are one of the many young families relocating to the district, part of a sweeping revitalization effort within the area.

“We love this neighborhood and the people here. There are so many kids here,” Stephanie says. “We truly love it.”

The family also loves the home itself. Stepping through the property’s original door with intricate glass detailing, one meets a blend of old-world and new. The home’s seven fireplaces and original fixtures mingle with modern floral patterns and colors to offer a perfect balance.

“Our interior designer was Jessica Moore, owner of Moore Design, and she did such a great job of creating an eclectic feel,” she says. “We bought some things but we were able to use a lot of Jim’s great-grandparents’ things with some of the pieces we already had. Jessica just brought everything together so well.”

Many of the antiques were purchased from local stores. But the couple also felt it important to personalize the antiques.

“All of the stores know me well now, because I’m in there all of the time,” Stephanie says with a laugh.

Of the many downtown locations the Jacobs perused, Browns Antiques, was also one of the most frequently visited. And that’s because the family-owned business also had a unique connection to the home.

“They actually lived here, and Ms. Brown was so helpful with the history and what was here before. The chandelier in the dining room, for instance, was in the shop and we bought it back,” she says. “It’s funny because I always gravitate toward things that were in the home before.”

While the family is still working on renovating their space, their goal remains the same — to blend beauty and function so they can truly enjoy all things about their home.

“We have kids here all the time … and while we wanted to have antiques, we wanted to be able to live in it too,” Stephanie says. “But we’re so happy with it. We just love it.”