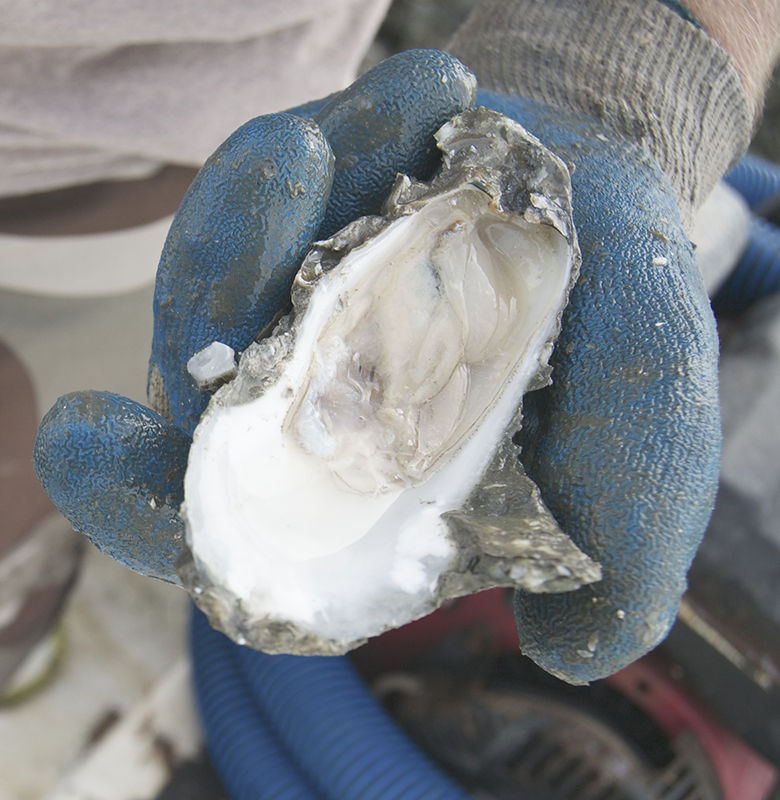 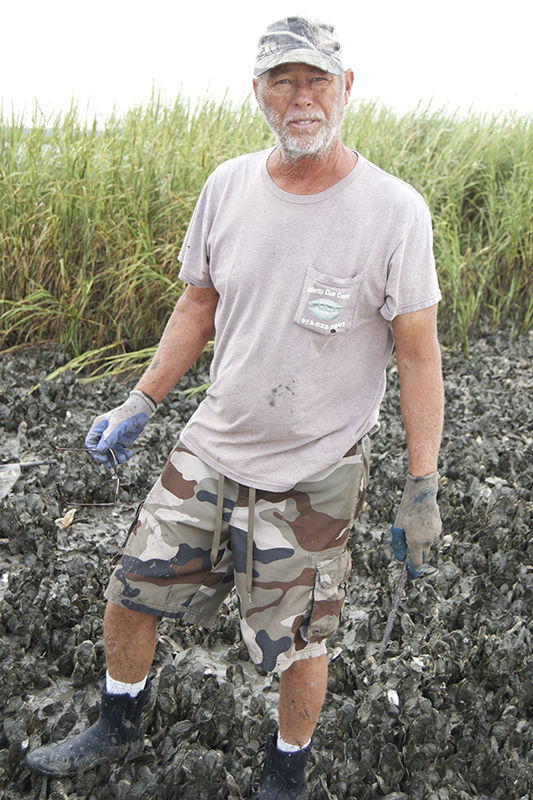 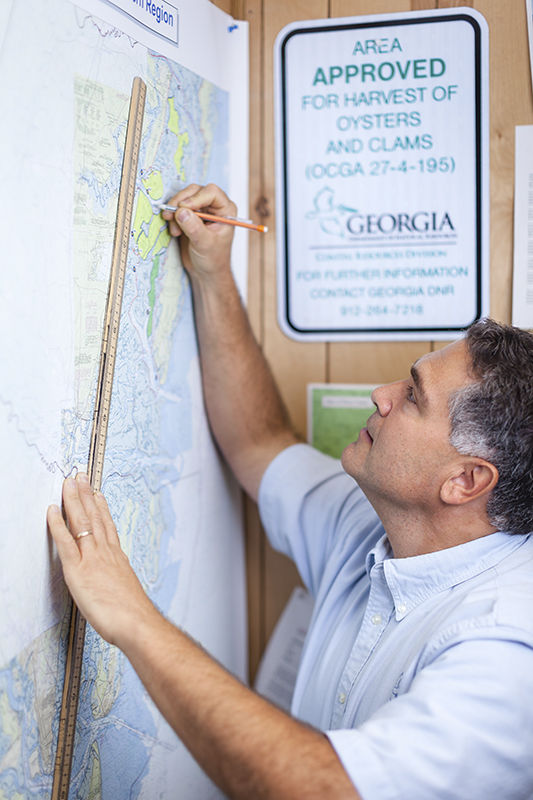 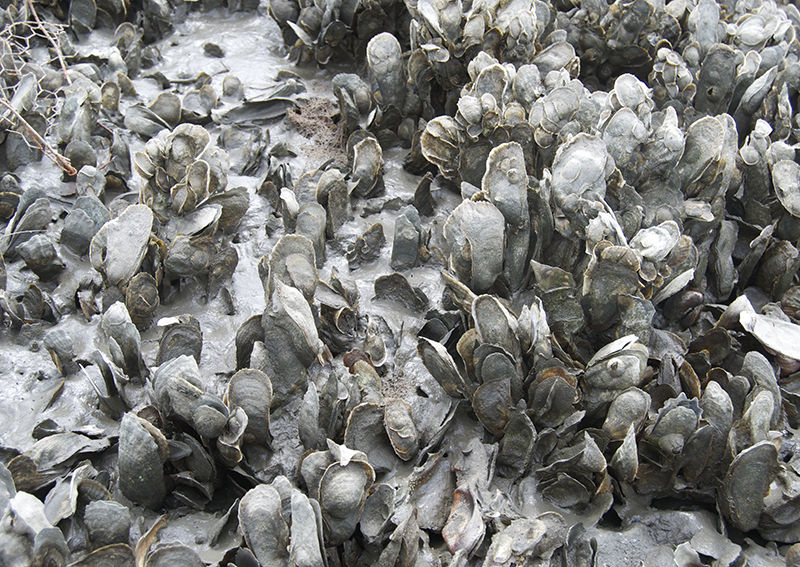 A bed of Georgia oysters rooted in the pluff mud.

A bed of Georgia oysters rooted in the pluff mud.

Jeff Ericksen has plied the coastal waters off McIntosh County all his adult life, yet he somehow manages to get his boat stuck in the mud at low tide just about every time he goes out nowadays. True enough, the drop from high to low tide in these parts is one of the most dramatic on the entire Atlantic Seaboard. But come on, Jeff, you’re a savvy old salt. What gives?

“You gotta get stuck,” Jeff says with a tone of resignation, the waves slipping away below him on a September Saturday. Dapples of sunlight shimmer in flashes across the waters that float his boat, The Lucky Lucky Man, reflecting how swiftly it flows east on one of its twice-daily sprints back out to the ocean. As the water level recedes, Jeff’s surroundings transform. A vast expanse of water steadily gives way to the primal gray mud of the salt marsh. Prominent in this newly-revealed landscape is a scattering of huge sloping mounds that appear to be formed of rock and shell. A closer inspection reveals these mounds to be living landmarks – Jeff’s reason for being here.

That’s right, people: If y’all want those succulent, salty delicacies for your autumn afternoon oyster roasts, or for a comforting stew on a rainy December day meant for staying inside, Jeff has to get stuck in the mud at low tide.

“That’s how it’s done,” says Jeff, 56, a long-time shell fisherman. “The tide goes out and you stay here and you get what you can get and you don’t leave till the tide gets back.”

It all sounds a tad risky. “It can be,” Jeff says. What if a storm comes up? What if the skies ignite with lightning or if gale winds come sweeping down? “Tough!” Jeff says. “You’re out there and that’s that for the next six or seven hours. You’re not going anywhere until the tide comes back.” And doesn’t the height of the oyster harvest occur during those bonechilling winter months? “That’s right, and you’ve got to put on a wet suit in the winter to do this, because I mean it gets cold out here.”

But Jeff and shell fishermen like him have enough work to occupy those hours spent stranded that they can’t waste time worrying about things that are out of their control. Jeff is one of 16 shell fishermen who hold leases on oyster harvesting areas from the Georgia Department of Natural Resources. Those long hours stranded high and dry are spent prying oysters loose from the clusters and loading down their boats with fresh deliveries of one of the region’s most treasured seafood delights. When the tide comes back – and it always does – they will rise to the occasion to make sure your beloved fresh oysters make it to market.

“If you weren’t making money out here, this would get real boring,” Jeff says. “But there ain’t nothin’ easy about this. You can’t just have a parttime job and expect to do this on the side. It takes work.”

This particular outing is only a trial run to show us how it’s done. It’s a three-hour tour, not the stranded long-haul. With the channel so narrow a 7-year-old could throw a ball across it, Jeff expertly escapes on a ribbon of fleeing water as the last streams of low tide ebb away. The oyster harvest season officially opens Oct. 1.

The locals’ open air method of harvest is just one of the reasons Georgia oysters are so unique, says Dominic Guadagnoli, a marine biologist with the DNR. This is not how oysters are harvested in other parts of the country, such as in the Chesapeake north of us or in Mobile Bay on the Gulf. In most places oysters grow singularly beneath mud and sand that remains completely underwater. They are raked out of beds 10 feet or more below water with long-handled tongs. But that’s not how we do it here. “Georgia oysters get exposed to air twice a day,” says Dominic. “The shell fishermen here actually go out at low tide and get out on the oyster reefs.”

But the main thing that makes Georgia oysters special is the water in which they thrive, he says. The Georgia tidelands comprise the most extensive, virginal marsh on the Eastern Atlantic Seaboard, Dominic says. Cradled between the residential barrier islands and the populous mainland are 350,000 acres of protected saltwater marsh. Up and down the coast the marsh is no less than 5 miles thick and up to 7 miles across in some places. The distillation process that occurs in this natural filtration system creates water so pure it has been compared to that on the frontier coast of Alaska, Dominic says.

“We have acres and acres of salt marsh that is untouched. There’s nothing you can do out there. We are very fortunate to have so much protected marsh and resources that are so remote.”

That’s really good news for all you oyster lovers. Here is the icky part you need to know about oysters: They are filter feeders. And, like pigs in slop, they are not particular about where they live or what they eat. “Shellfish do fine in high bacteria,” Dominic says.

That’s why, as much as we love them, eating raw oysters is always associated with certain health risks. It’s up to scientists like Dominic to make sure the oysters we eat live in a healthy environment.

“Other commercial fisheries depend on the quantity and the health of the population,” Dominic says, referring to management of fish or shrimp harvesting. “The shellfish industry depends on water quality.”

Within this vast saltwater wilderness, the DNR limits shellfishing to a central region of the marsh that comprises 157,000 acres covering six counties: Camden, Glynn, McIntosh, Liberty, Bryan and Chatham. The DNR maintains 82 water testing stations in this designated region, ensuring that the waters are free of bacteria from the humans surrounding the fringes of the marsh, as well as naturally occurring bacteria that can also cause health problems. Oyster season closes during the hot summer months because warmer water temperatures raise the risk for bacterial activity, Dominic says.

“We want to ensure that the animals are filtering low amounts of bacteria, so that when the season does open up we want to be able to provide safe, healthy shellfish on a consistent basis.”

If you are among the locals who insist Georgia oysters are the best, you might want to thank Dominic’s DNR crew for their diligence in ensuring these waters remain as intended by God’s natural filtering system. From Portland to Galveston, it is all the same oyster, Dominic says. The source of a distinctive flavor for each is in the water. Trust him on this. Dominic quite literally loves his job. He has tasted oysters from virtually every backwater in the nation. He is partial to Georgia oysters, particularly Chatham County oysters.

“We’re known for a briny, sort of nutty flavor,” Dominic says. “It is the same species from Maine to Texas, but the oysters do taste different, based on where they are grown. Even McIntosh oysters taste different from Chatham. It’s the water, yes.”

And it’s not much of a stretch to say this same water has molded Jeff into the independent, free-spirited man he is today. All of his stories somehow lead back to here – blending seamlessly with the thick salt air, the swaying marsh grass and the perpetual cadence of the shifting tides. “Dad and granddad drowned out here,” he says, talking nonchalantly above the grind of the engine as he stands behind the wheel of The Lucky Lucky Man. “I nearly drowned out here a few years ago.” He laughs about that now. “Hell, I’ve been out here my whole life. I ain’t got rich yet, but it’s a living.”

Above the wind and the engine, there are also bits and pieces from Jeff about a love of surfing spawned as a youngster in Hawaii, marrying a high school sweetheart from St. Simons Island, and returning to McIntosh to start life as a shrimper.

Before he can tie it all together, the engine quiets to a trolling drone as he approaches one of his oyster reefs. The tide is just starting its retreat and only the tops of the oyster reefs are visible. His leases are marked with ordinary sticks, stuck in the mud below and poking out above. An oyster reef’s foundation is buttressed with sticks bundled together in wire, old crab traps and any other natural wood scraps that will attract the oyster larvae.

Oysters are called spat during their larval stage, Dominic says. They have two weeks in this stage to attach themselves permanently to something. They settle on the wooden debris laid about by the oystermen and cluster with other oysters because they are attracted to their calcium.

Within a few minutes, enough water has slipped away to see the oyster reefs more clearly. Jeff steps out of the boat and onto the reef, carrying his main harvesting tool – a foot-long piece of weathered rebar salvaged from an old crab trap. “That’s how you make a (oyster) bed right there,” he says with satisfaction, standing atop the reef. “We try to keep all natural stuff out here as much as we can.” He pries an oyster from the mound and offers a taste. It is salty and bursting rich with flavor.

On a good day in season, Jeff can fill his boat up with fresh local oysters. He sells them wholesale to local markets, including Dockside Seafood and Shell Creek Seafood. “I can get $35 for a bushel (60 pounds) wholesale,” he says. “People work hard for their money and I try to give them a good deal.”

And anything that keeps him out here is a good deal for Jeff. He was just a kindergarten tyke when his father, Bobby Townsend, and his grandfather, Irvin Townsend, came out here fishing and never came back. “No one has ever figured what happened, why they drowned,” Jeff says. His mother remarried to a U.S. Marine shortly after. Young Jeff was given his stepfather’s surname and began life as a military brat, moving from Washington state to California to Kansas and then to Hawaii. “I was just a kid, and Hawaii was great,” Jeff says. He has had the surfing bug ever since. “We took our honeymoon in Cocoa Beach because I love surfing so much,” he says with a laugh.

That honeymoon was with the former Lisa Gomez of St. Simons. They met at Glynn Academy in Brunswick, after his family had moved back to the area when he was a teenager. By his senior year, though, the lure of a shrimper’s life had drawn him back to McIntosh County. “I had six months to go (to graduation) – I didn’t quite make it,” he says.

Over the years he worked his way up to shrimp boat captain. But by the end of the 20th century rising fuel costs made it too difficult to continue. “I shrimped my whole life, but fuel prices got so high…. I just got tired of working for Saudi Arabia,” he says.

But that couldn’t keep him off the water. He just found a new way to make a living out here, bringing in the oysters y’all love so much. Like he said, it’s not easy. But as far as Jeff is concerned, a bad day stuck in the marsh beats a good day working on the hill every time.

“The way I am now, hell, I couldn’t do a good job for anybody else,” Jeff says, guiding The Lucky Lucky Man back home. “Damned if I know why I do it. It’s not the money. I just like to be out here, working on the water.”