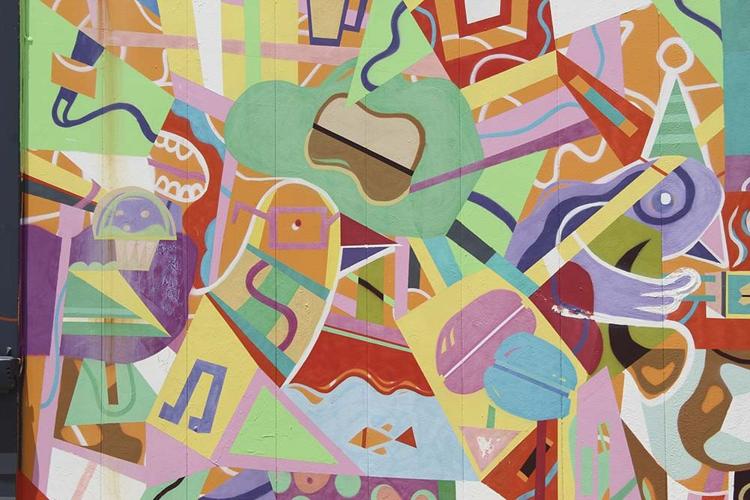 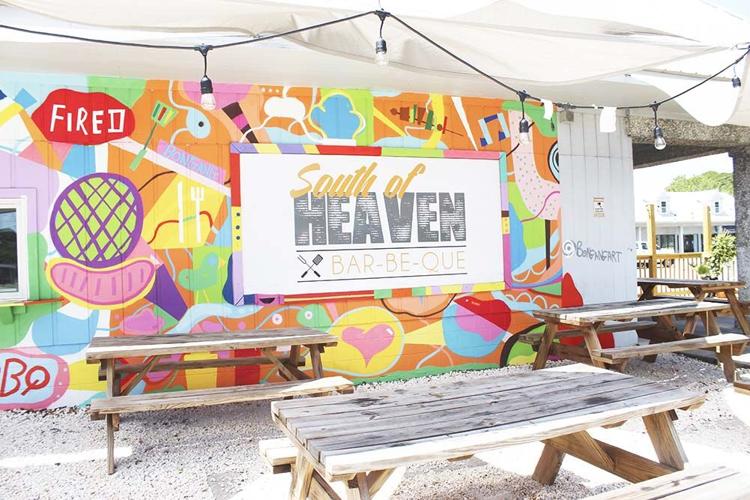 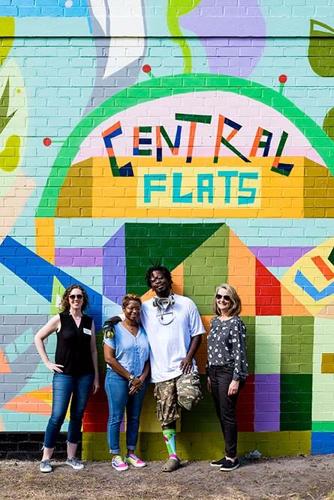 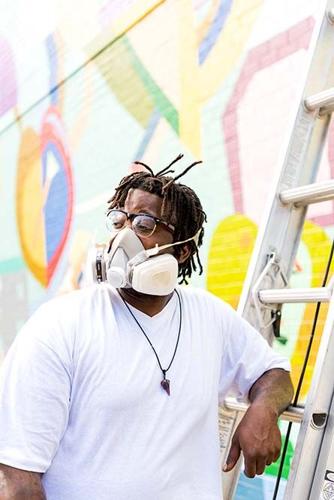 Like many Brunswick residents, a drive down Altama Avenue is a daily occurrence for me. Along the way, there’s not usually much excitement.

Well, that is, until I see those telltale pops of pinks and orange on the side of South of Heaven Barbecue. The vivid hues and expert artistry can only belong to one person — Kevin Bongang.

For the past few years, it seems like Bongang’s bold murals have been materializing all over, brightening up buildings and bringing color to a monochromatic landscape. Bongang’s flare and unmistakable, upbeat style has created quite the buzz.

But it’s been a journey. The painter, who is a native of Cameroon, West Africa, started his artistic adventures when was just a child.

“I arrived in the U.S. when I was 11 and lived in South Carolina before moving to Savannah,” he says. “I’ve always had a passion for art, even before I recognized it as my gift. My parents have always been supportive and they acknowledged my love of art at an early age, going so far as letting me draw on our walls.”

During his early life, others in his family helped guide and encourage Bongang. His cousin, in particular, helped to nurture his talents, especially in drawing.

“My cousin really helped me in my younger years with sketching and drawing my favorite cartoons and comics. I knew in middle school that I wanted to have a career in art,” he says.

To strike out on that path, Bongang attended Savannah Arts Academy High School, before applying to the prestigious Savannah College of Art and Design (SCAD). There, he earned both his bachelor’s and master’s degrees in illustration.

Though his experiences at each level differed, his education helped him build consistency in his work.

“High school was great. There were some fantastic teachers — Napoleon Wilkerson, Steve Schetski, and Carrie Chapman — who were also artists that really helped me refine fundamentals and techniques,” he says.

“College was enjoyable but very different. It really helped me in the areas that needed attention such as discipline and focus. I believe in timing in my journey and I wouldn’t have done anything different to speed up my learning process.”

In both high school and in college, Bongang studied the traditional artistic pillars including the likes of Basquiat, Haring, Picasso, Kandinsky, and Dali. While they were inspirational, it became clear that Bongang was going to blaze his own trail.

“Throughout the process, I explored and discovered mural art and fell in love. I create art digitally, on canvas, on walls, and on nontraditional surfaces such as playgrounds and shoes,” he says. “After completing my undergraduate and graduate degrees, I began pursuing mural work.”

But as with all things, his success was built on time and patience. In the meantime, Bongang worked as a full-time graphic designer at a Fortune 500 company. That lasted for several years before company layoffs forced him to redirect.

“The company laid off thousands of employees after a corporate merger and pushed me into position to decide to pursue more corporate work or pursue my art business full-time. I was devastated and scared but I took a leap of faith, pivoted, and chose my art,” he says.

In fact, the move turned out to be one of the best he’s ever made. Once his work started to circulate, he’s racked up an impressive list of clients. From local businesses like South of Heaven and Wake Up Coffee’s Altama location to The Chapel’s exteriors, the basketball court of the Boys & Girls Club at Burroughs-Molette and a playground at Satilla Elementary, Bongang has definitely made his mark on Brunswick. He also frequently travels to places like Nashville and Atlanta for mural work.

“After building my portfolio and refining my style, I became sought after by private and commercial clients alike. My business began to grow exponentially as I dedicated more time to my craft and prioritized my art career. As a result of my increased demand, I was able to employ my wife full-time to manage our brand and business,” he says.

“I meet my clients’ design needs in a process that allows me to share in their vision. The client usually has a look or message they want. I then study their brand and add my style to create something complimentary to tell their story. These days you can find me painting murals, creating graphics and illustrations for commercial brands, and engaging in my local community and communities all over that I love.”

For Bongang, the process has been incredibly rewarding. Not only is he able to have the perks of working with his wife, being able to set their own schedule, he’s also able to see how his vivid designs impact others.

“I work to put smiles on people’s faces, brighten children’s days, and send simple but powerful messages in the name of peace, encouragement, and positivity. I operate my art business with my wife and best friend, Britney, who also serves as my art representative, paint assistant and project manager. I am most proud of the fact that I am able to make a living creating art,” he says.

“Inspiring others, especially the youth, to create is also very rewarding, showing them they too can be a full time creative when they grow up.”