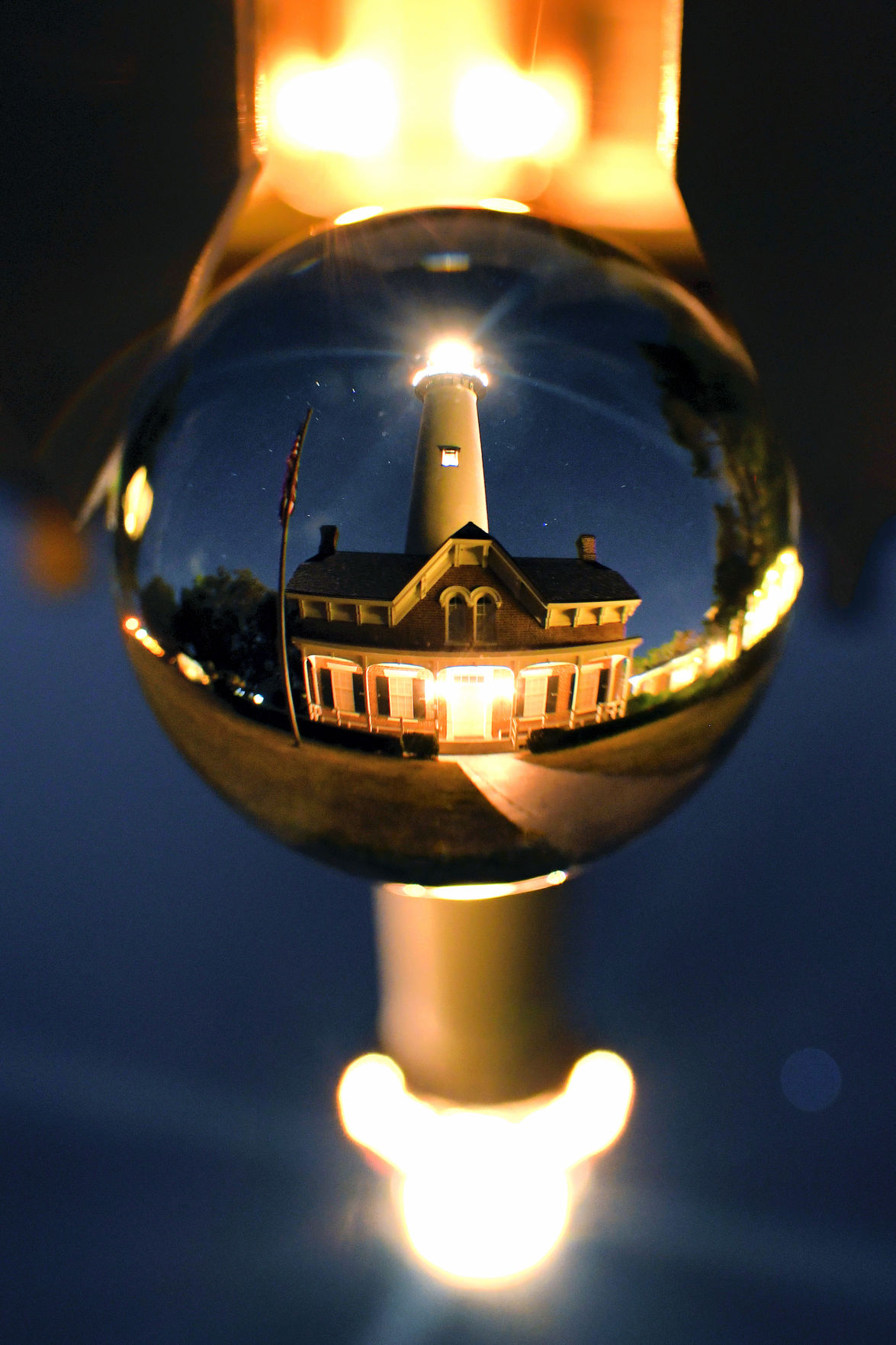 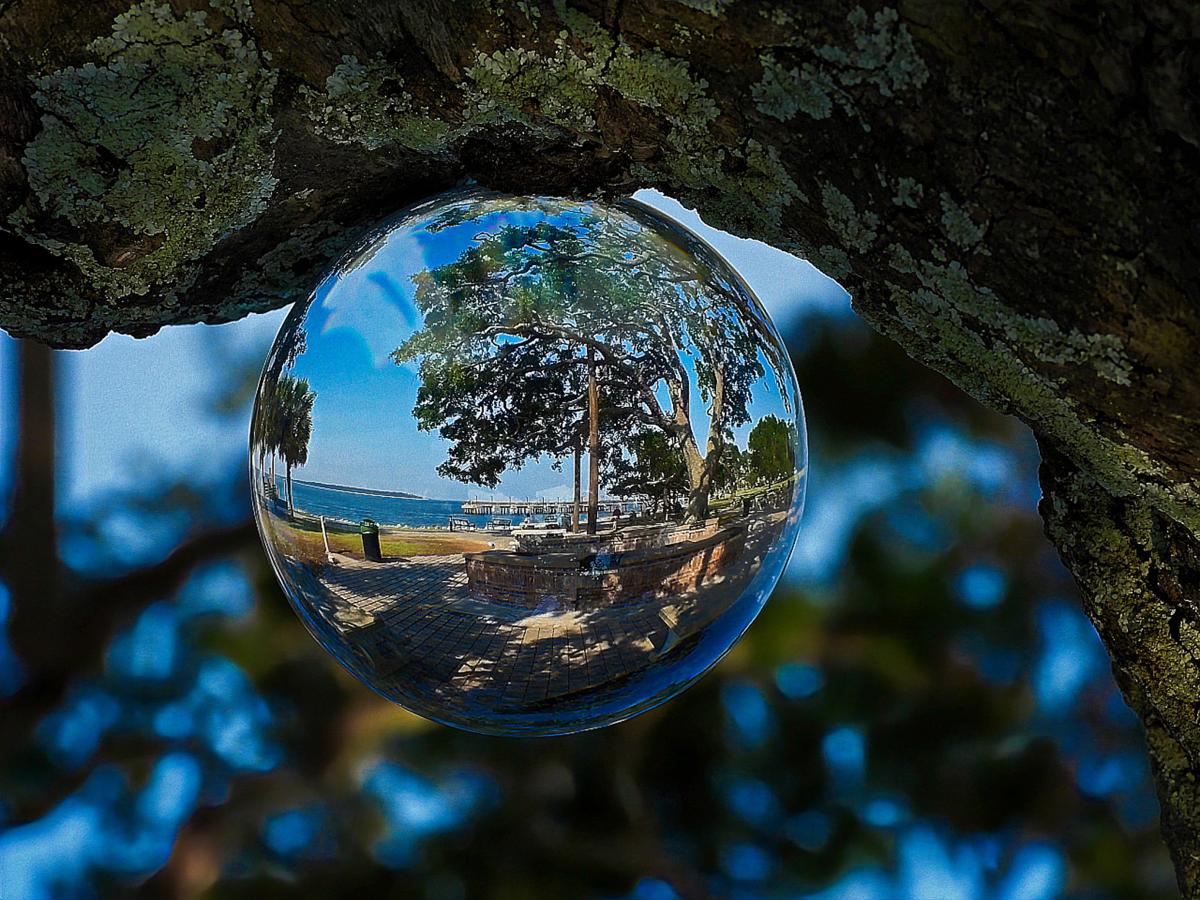 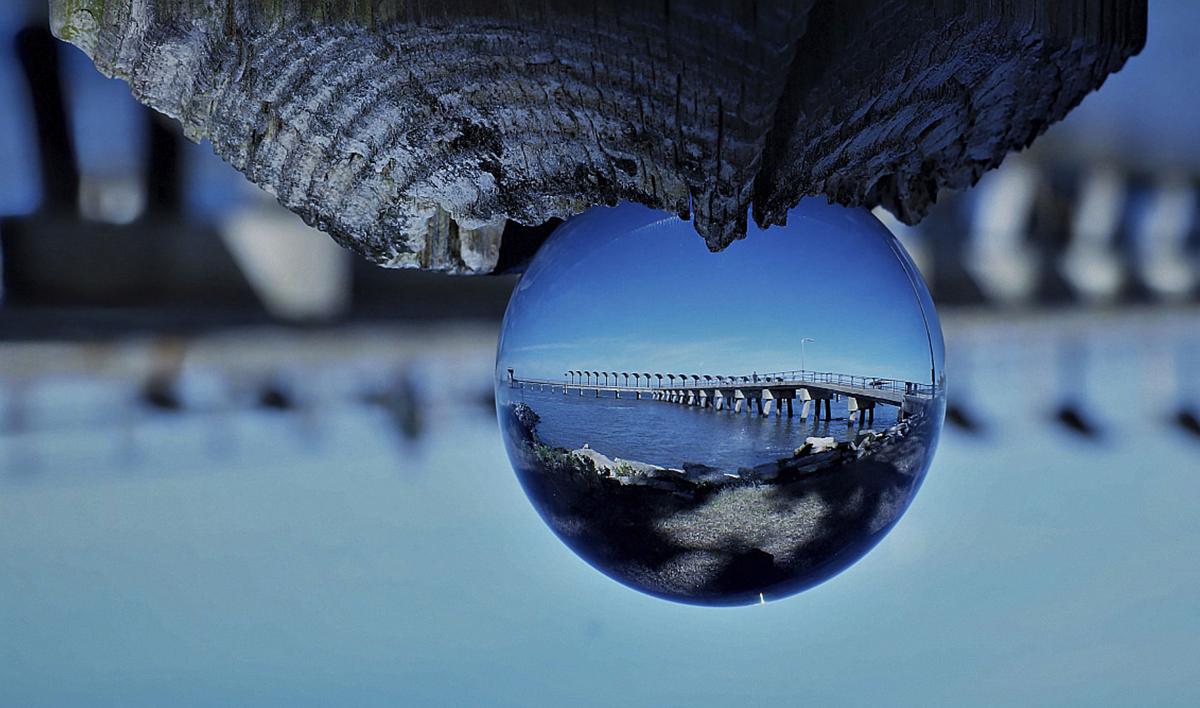 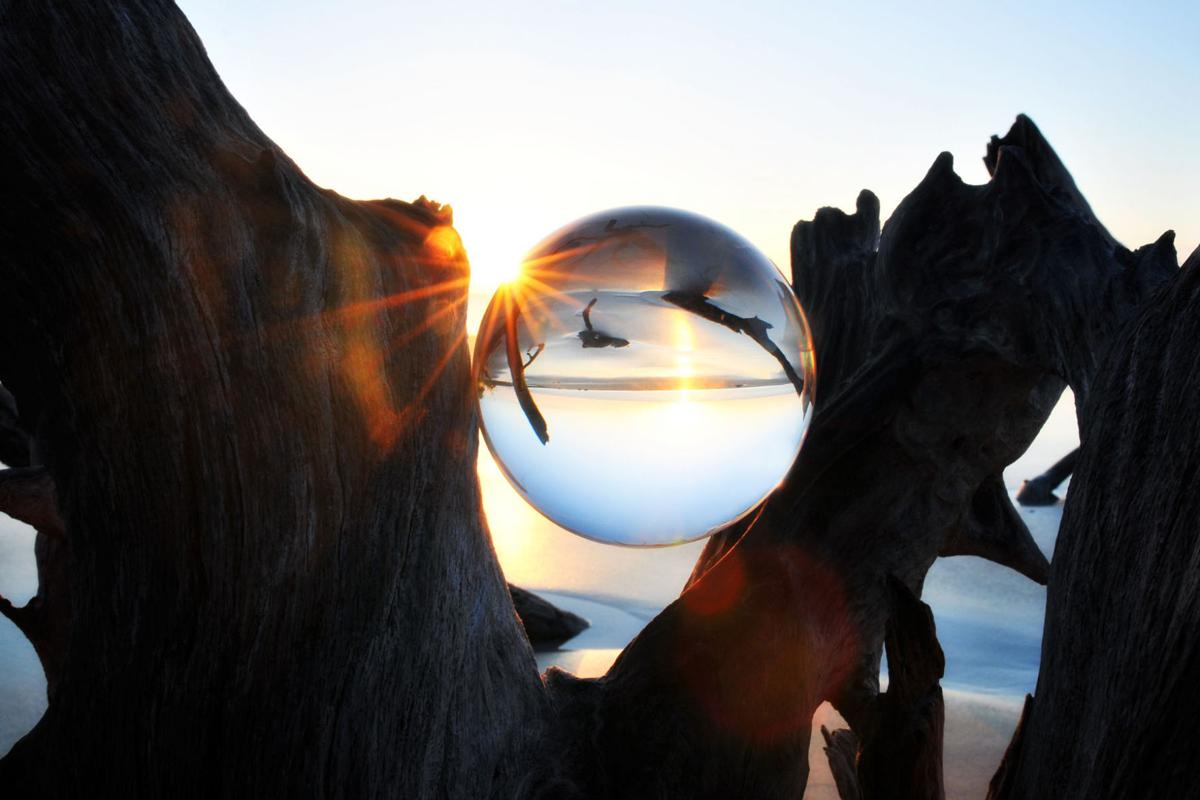 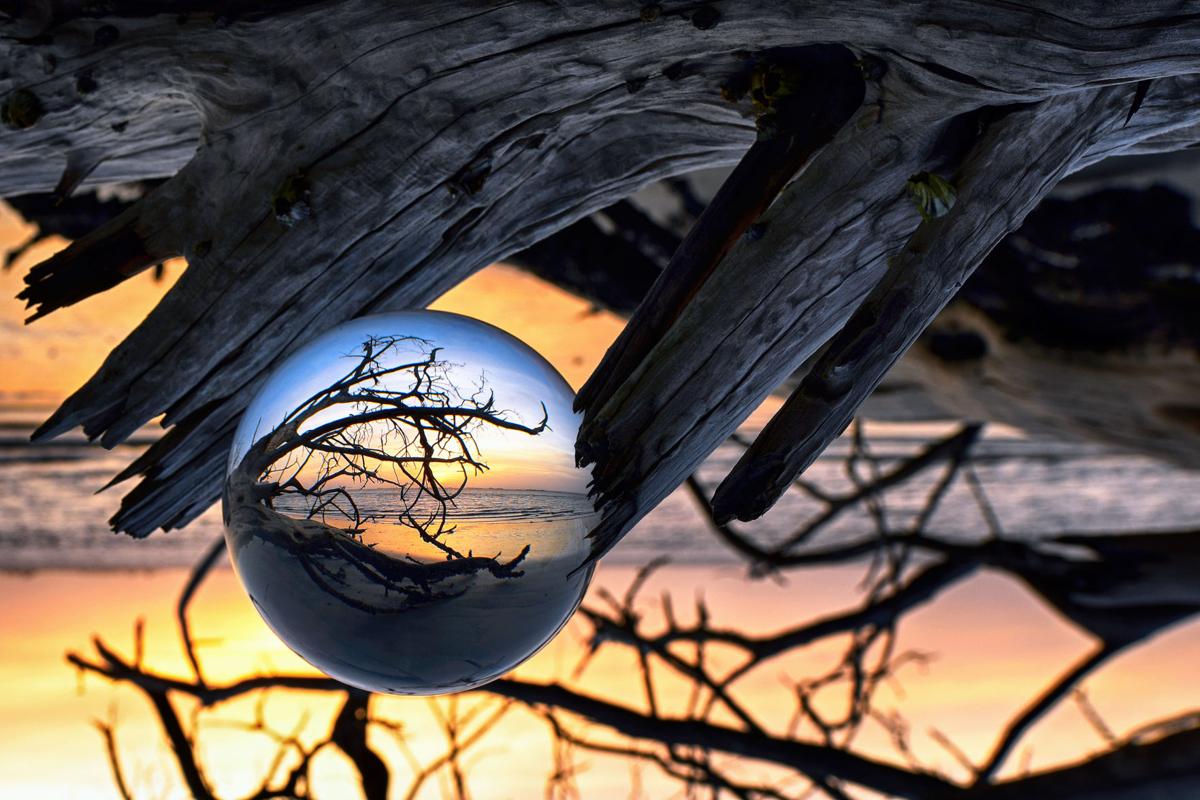 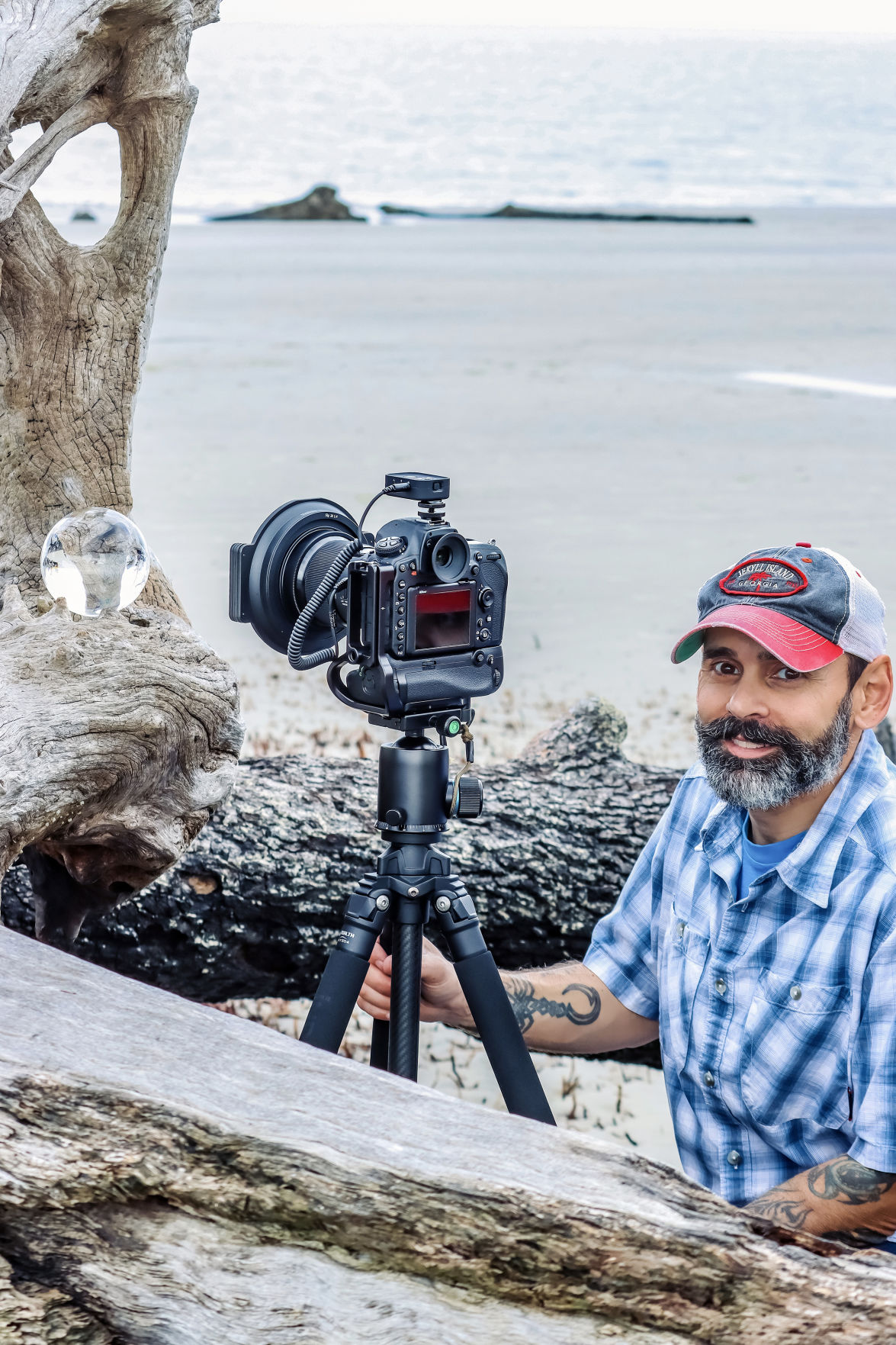 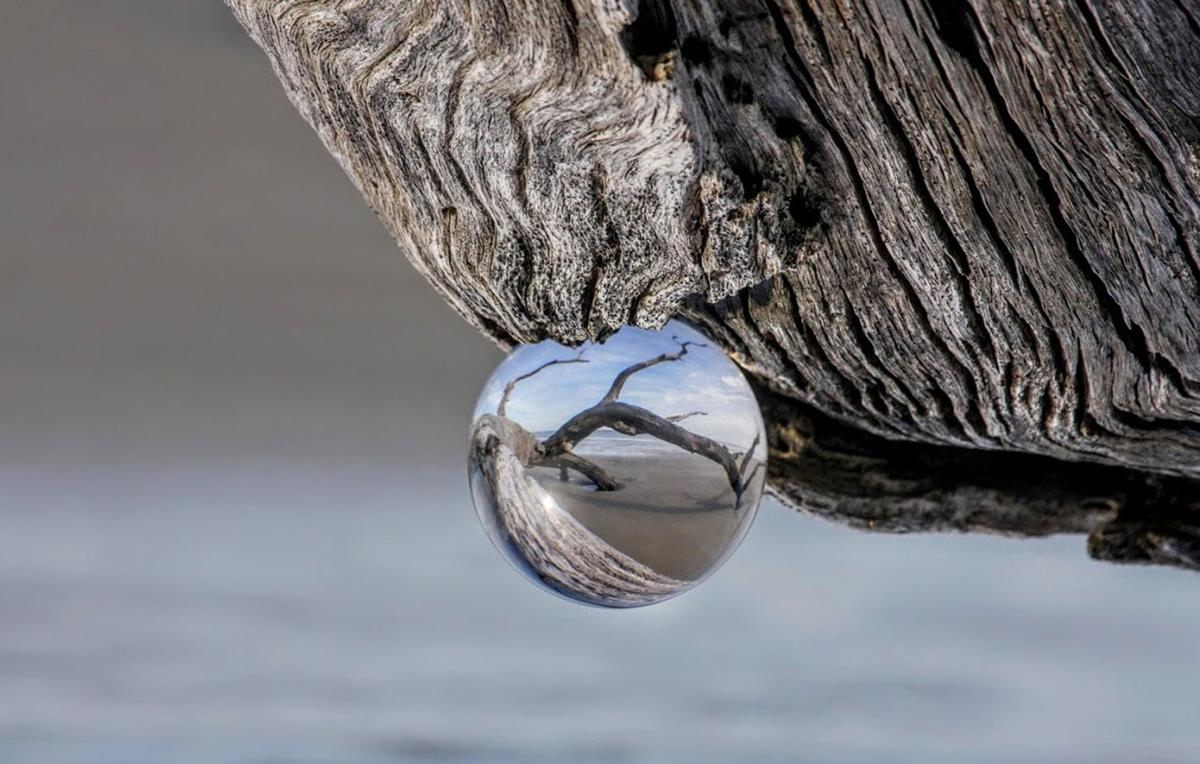 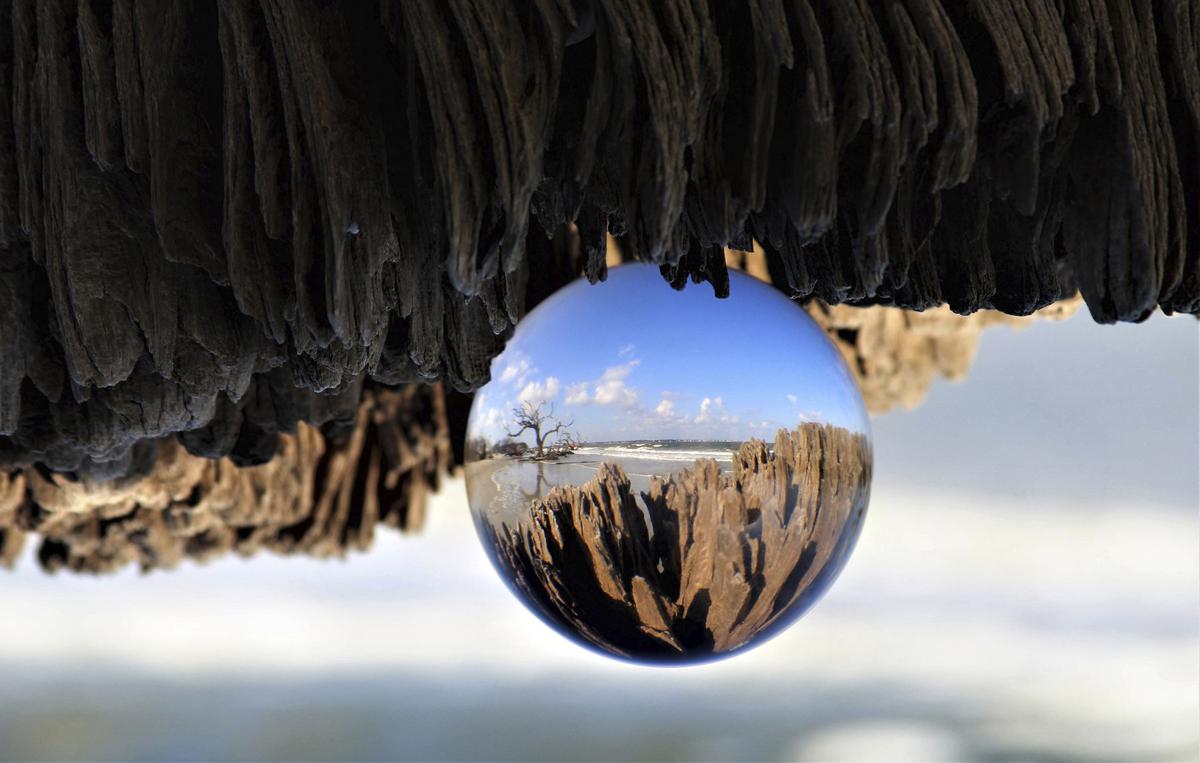 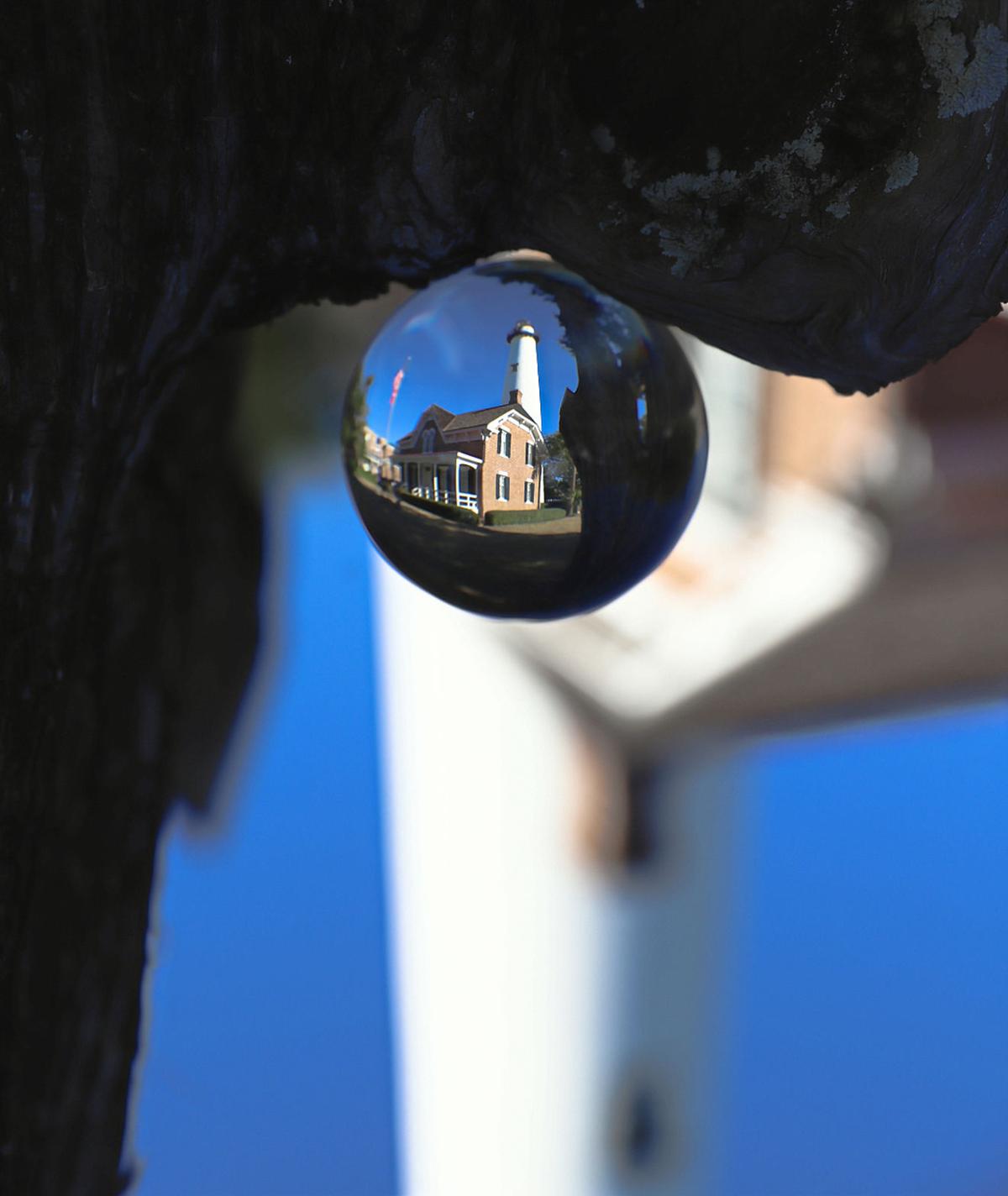 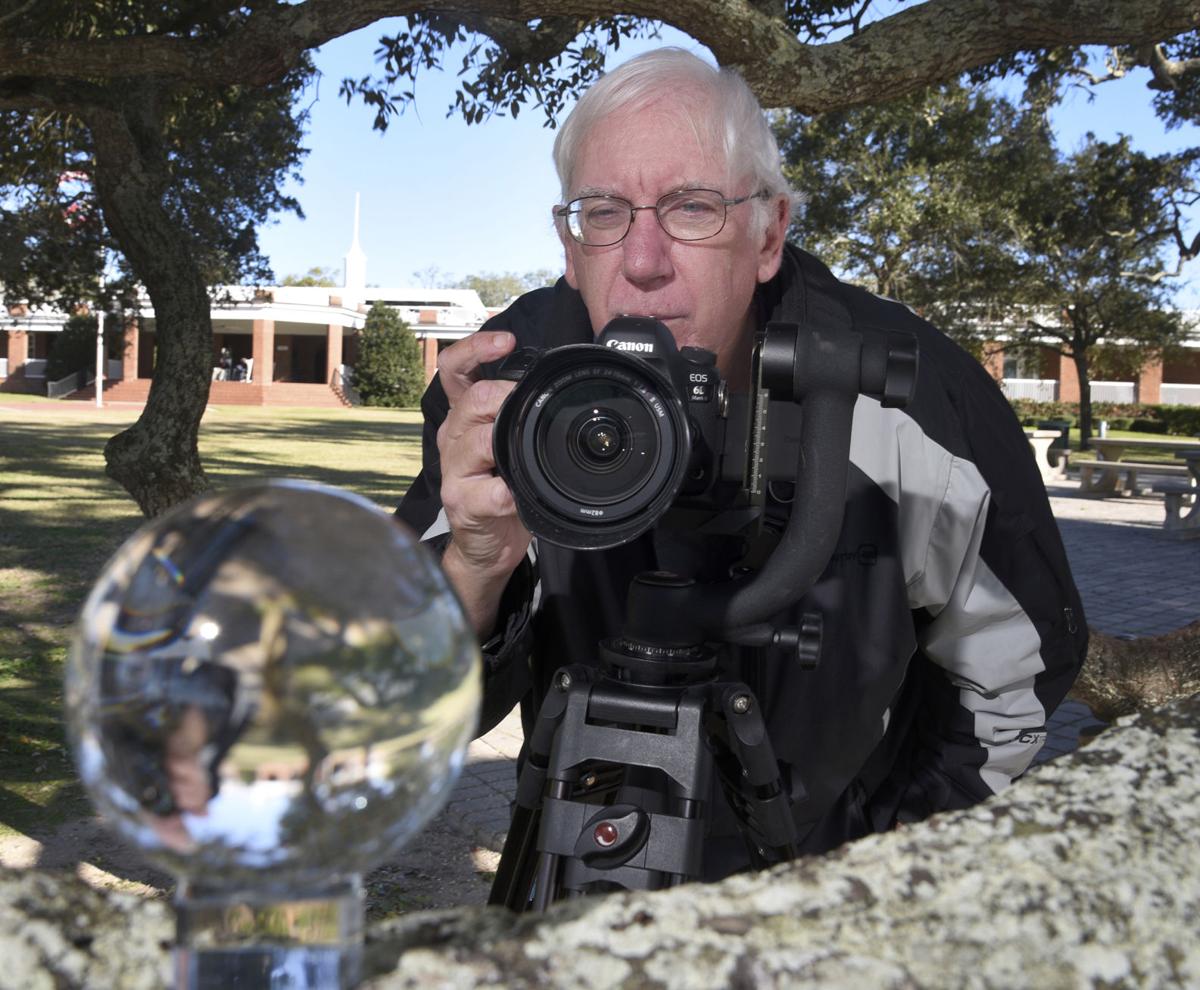 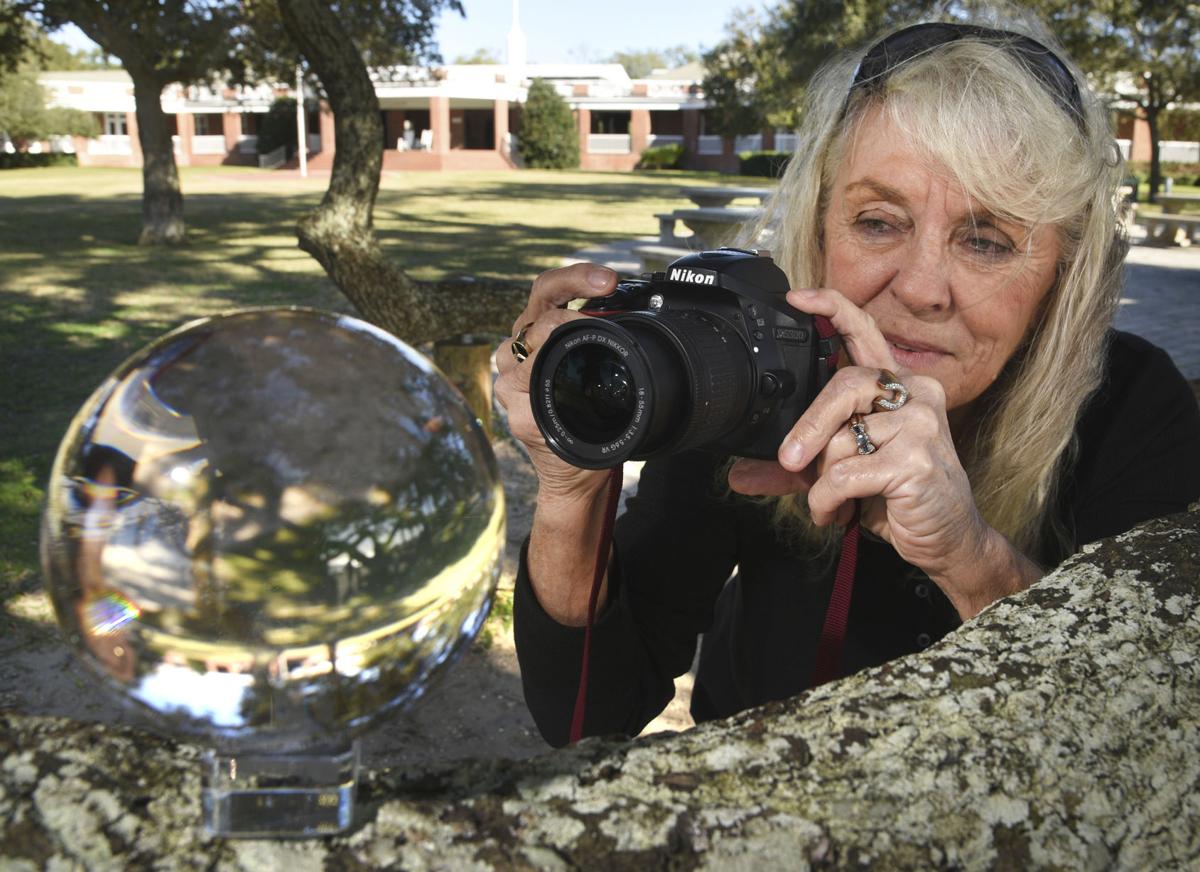 Like the allure of the siren’s song, the abundant natural beauty of the Golden Isles has called countless artists to its sandy shores. Potters are nestled in their studios bringing form to shapeless heaps of clay. Painters, canvas in hand, can be found wandering about, seeking the perfect scene to preserve for posterity.

And, of course, there are the photographers. From dawn to dusk — and sometimes beyond — those in search of birds, sunsets, and sweeping marsh vistas flock to the area to capture the natural world in all its glory.

Yet, even while cloistered in abundant beauty, one can become immune. It often takes a different perspective to truly appreciate the majesty of one’s surroundings. And some local photographers are taking that concept to the next level.

Globe photography is a trend that has been around for some time, making an appearance in online communities, as well as local organizations like the Coastal Photographer’s Guild. The process uses a glass orb that is delicately positioned to reflect surrounding scenery.

Many members of the local guild as well as independent artists have experimented with the technique, stepping out to capture the natural world as reflected through the globe. And what they’ve found through the process is a renewed appreciation for the world around them.

The St. Simons Island resident’s passion for photography was first sparked when she was a child, as she shadowed her uncle, a photographer for Brenau University.

Robinson started taking her own photos about 30 years ago, making a hefty investment in her own Nikon camera.

“It was $300 and my husband had a fit. But then I entered this photo contest for Southern Living Magazine. I was in the top eight out of 68,000 images,” she recalls.

The photo she submitted was beautiful yet simple — just her grandson blowing bubbles. “I saw him doing that and I snapped away,” Robinson says.

Her prize for landing in the top 10 included airfare, a hotel room, and a trip to Dollywood.

“My husband never said anything about the camera after that,” she says with a laugh.

It was the beginning of a passion for the St. Simons Island resident. Since then, she’s snapped photos all over the Golden Isles. Images of birds, crabs, and other animals are displayed throughout her home, and reflect her love of wildlife.

“It takes a lot of patience and a lot of waiting. A lot of it is luck,” she says of capturing animals.

It’s paid off for Robinson though, resulting in some truly stunning images. But she’s also always looking to embrace new challenges. So when the photography guild showcased the glass globe technique she decided to give it a whirl.

“I just got (a globe) on Ebay one day. I thought, ‘that is going to be fantastic for Driftwood Beach.’ So I took it there and just started playing with it,” she says.

Of course, it took plenty of practice before she started to get what she was looking for. Finding the appropriate angle and position was no easy task.

“It took me a while to get it right. I would put it in a different place, and it would fall or wouldn’t look right. And of course, everything in the globe is reflected — so it’s backwards and upside down. So I would have to rotate it afterward,” she says.

“I would also keep getting fuzzy edges on the globe. I had to play with the depth of field. You have to make sure that the globe is really clean and there is no dirt or fingerprints on it.”

Robinson also had to experiment with angles. She would get on level with the orb, then try it from a higher vantage point. But trying new things, she adds, is always part of her photography process.

“There is really no set way to do it. You just have to get out there and try it. I always look for different perspectives,” she says. “There are rules for some things, but I always say ‘rules are made to be broken.’”

Even so, the new challenge has added a layer to her work. And Robinson always feels grateful to have yet another skill in her arsenal.

“I think it’s really cool. I love going out because every day is a different day. You never have the same day twice,” she says. “It is so beautiful here and every time I go out. I am just waiting to see what God wants me to discover.”

“Like everybody else, I had a Polaroid at one point ... and every other camera. But it was just was just family and vacation stuff,” Patrick recalls. “I did some 35 millimeter stuff years ago and was trying to learn a little bit then, but didn’t get too much into it.”

While he had dabbled in the medium prior, he decided to join the guild to refine his skills. It gave him an outlet to learn new things and plenty of opportunities to practice, something he notes is key for budding photogs.

“I’m a guitarist, and it’s taken me 50 years of playing to be decent at it,” he says with a laugh. “So I know that you have to practice anything that you want to improve at ... but you learn a lot of stuff through the guild. They mentioned the globes and I had seen some on my own. So I bought one off of Amazon and decided to try it.”

While he hasn’t devoted a ton of time to the technique, he does find that the unique images it creates offers a new and intriguing perspective.

“It’s fun and something easy that people can do with just a little bit of effort. There’s a little bit of set up and some patience required. You have to get the camera in some unusual places, like on the ground,” he says. “But thankfully, with modern cameras, you have a viewfinder, so that helps.”

Patrick notes that getting close to the globe is key. One also has to be mindful not to get his or her own reflection in the shot.

“You definitely have to play with it. And you can try some things in post-processing ... like cropping it or inverting it, which makes it look like it’s defying gravity,” he says. “Really, it’s like everything else, you just have to practice it.”

And Patrick is quick to credit the guild with giving him the space and direction to do just that.

“Before I was just going out and shooting, but going to the photography guild, you realize that there’s a lot more to photography than just pointing your camera or your phone and pressing click,” he says.

“There’s a lot to think about when it comes to the lighting and subject. You learn about getting out of auto mode to use manual and other settings. The guild has really opened all of that up for me. You learn a lot.”

John Valadas started exploring photography about eight years ago. His initial motivation was to find something to go along with his love of the outdoors.

“I moved down here from Massachusetts almost three years ago. I did a lot of hiking and I was looking for a complementary hobby. I bought a used Nikon and taught myself,” he says.

It was something that came naturally for Valadas, who is a musician and mechanic. He enjoys taking on a subject and unraveling the mystery through a dedicated learning process — good, old-fashioned trial and error coupled with a lot of patience.

“I think that is something that is missing in the world today. So many people are looking for that instant gratification. They don’t want to spend the time to really learn how to do something properly,” he says. “But you can’t buy a guitar one day and then play at someone’s wedding the next. It takes time.”

Valadas has invested the time and energy, patiently capturing wildlife and landscapes since relocating to the Golden Isles. Though he is not a photography guild member, he too, came to appreciate using the glass orb in his photos.

“It was just something different. When I saw it, I thought, ‘that could be interesting.’ So I got one and started using it. I really haven’t done a whole lot with it,” he says.

But the images Valadas has taken are impressive to say the least — Jekyll Island sunrises, the St. Simons Island pier at night, even the lighthouse glowing in the darkness.

“I like how you are able to get a scene in it. You want to have a backdrop, almost like a snow globe effect,” he says.

But like Robinson and Patrick, Valadas points out that part of the process is the search for the perfect location and angle. It, he notes, is an exercise in patience.

“That is a part of it too. You have to look for spots to set up in where you can get what you want — like the sunrise — but also get the background behind it,” he says. “You have to think of the vantage points and this angle versus that angle. It doesn’t always work, but you keep trying.”

And it’s the journey, rather than the result that Valadas finds beneficial. Not only is he able to create works of art, but immersing himself in nature allows him to find a sense of focus and peace in a chaotic world.

“It’s calming to me. I certainly didn’t get into photography for monetary reasons or anything like that. To me, it’s very grounding and a way to relax,” he says.