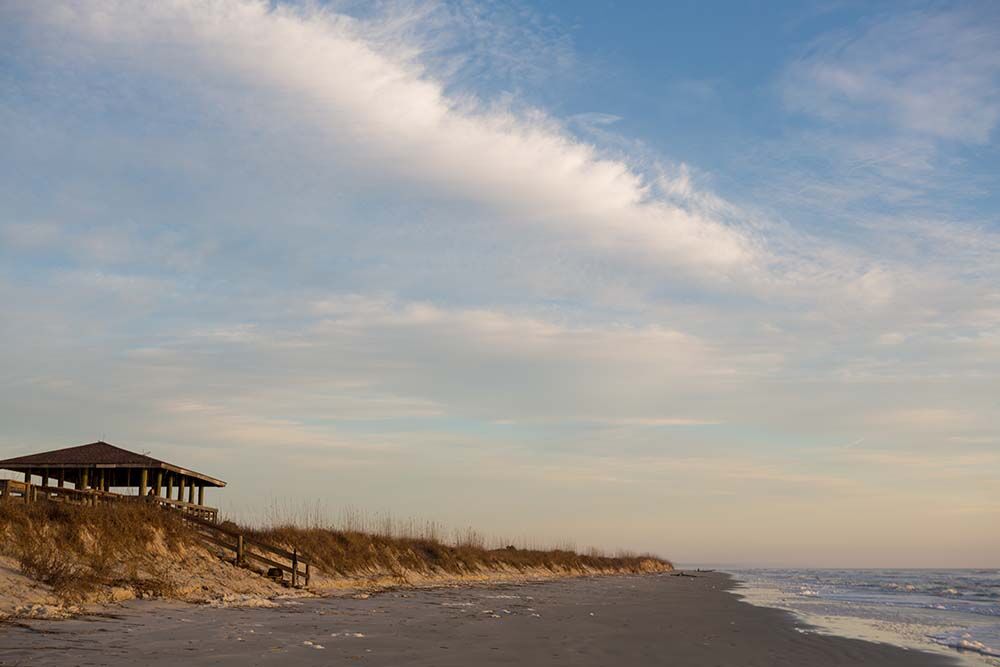 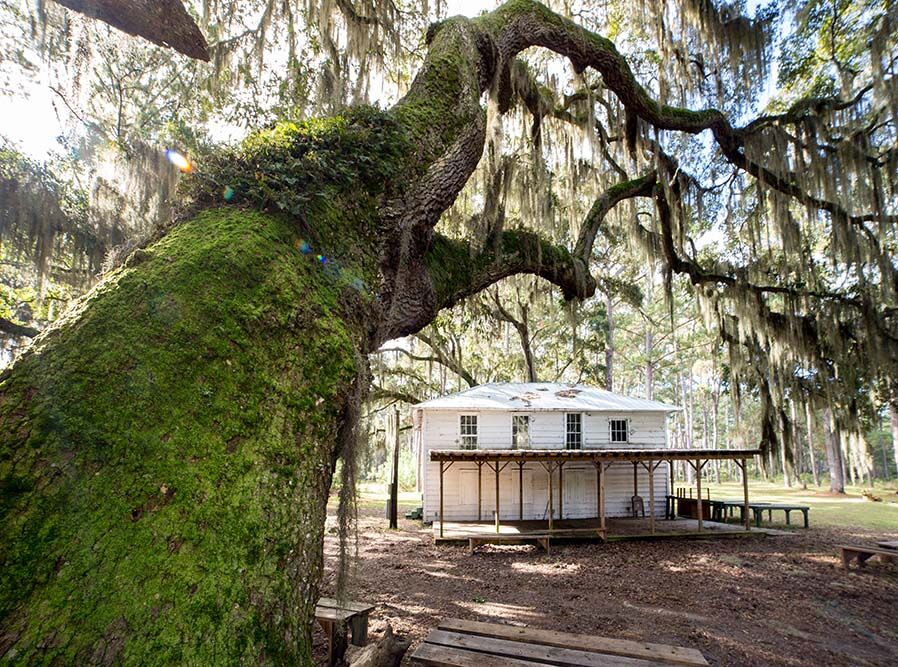 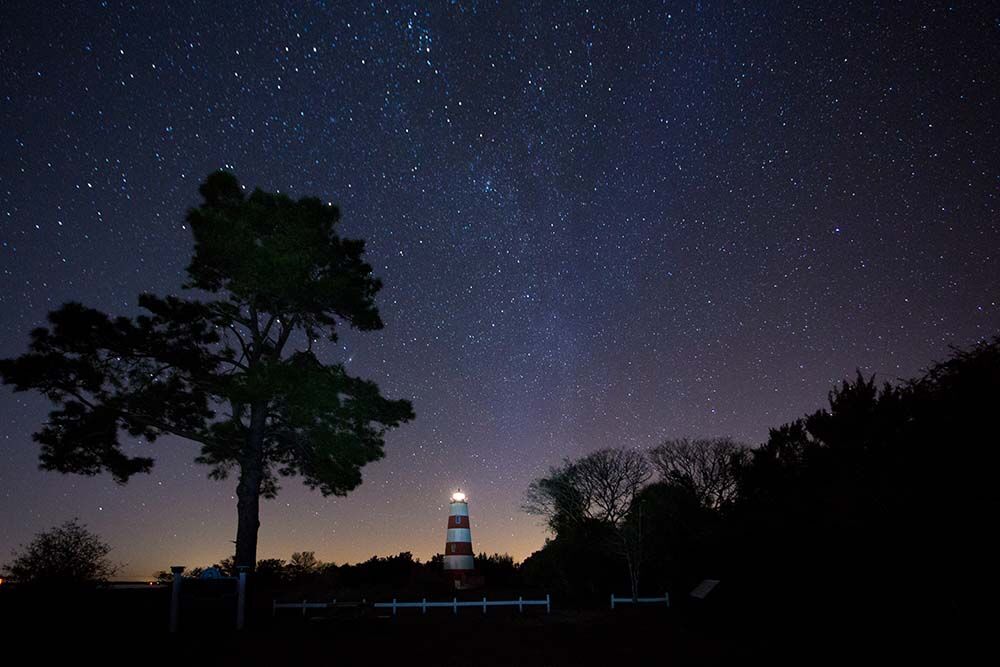 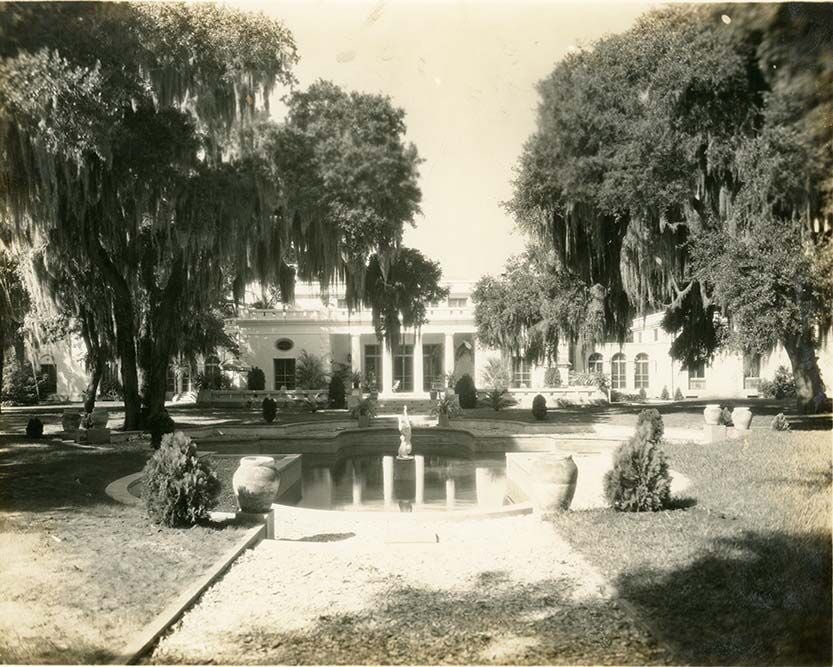 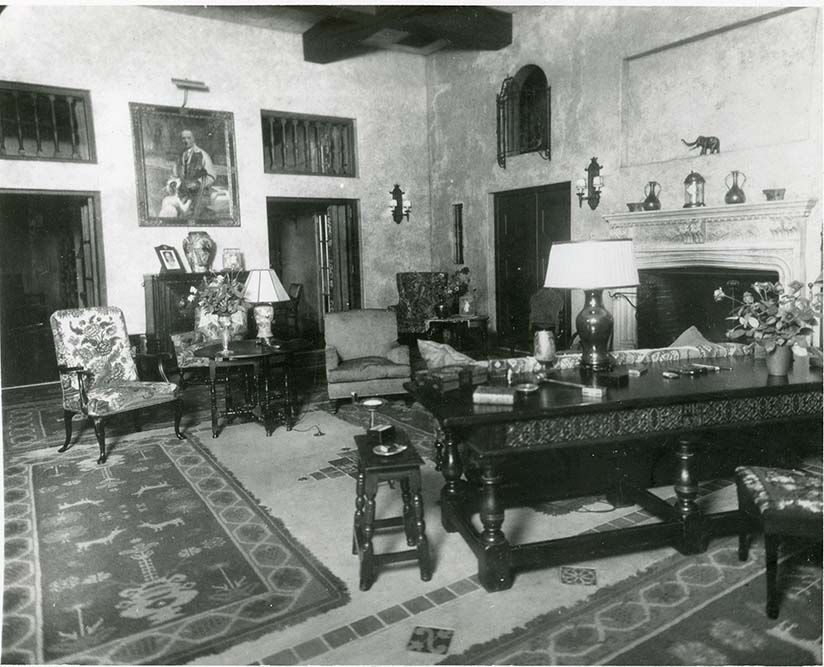 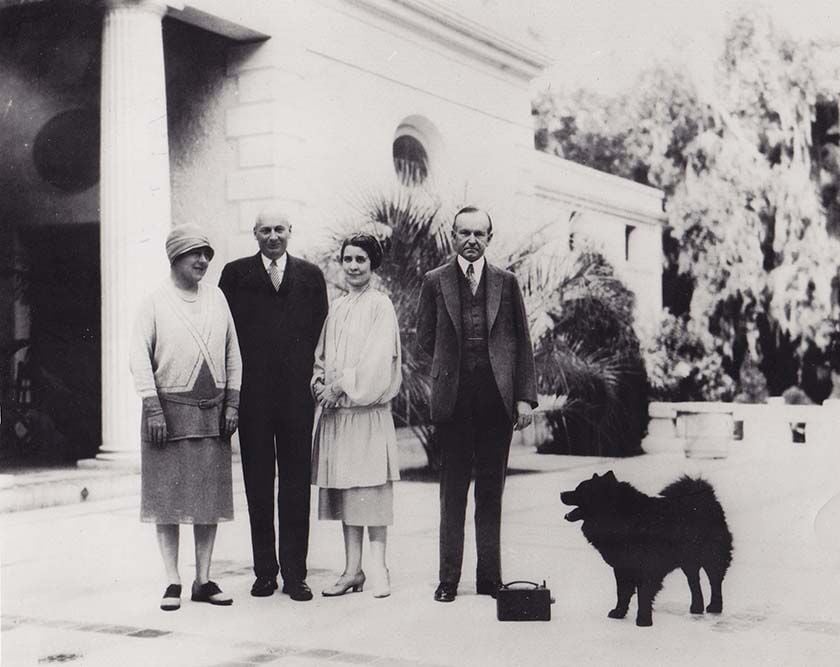 The Coolidges visited Sapelo in December 1928, a few months after The Cloister opened. 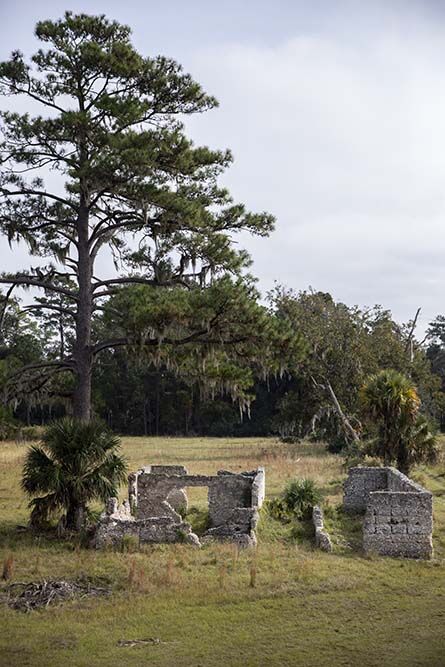 “I got my start as a sports writer covering college football for newspapers in Atlanta, Savannah, and Jacksonville,” Sullivan says. “It was an interesting career. I came back home and worked as the manager of The Darien News.”

After his tenure at the paper, Sullivan found himself shaking things up yet again. He was tapped to work with the Department of Natural Resources in education and outreach on Sapelo Island.

Located seven miles off the coast of Meridian, it is accessible only by boat or air. A ferry runs from the Sapelo Island Welcome Center multiple times a day, and a small community of residents have to utilize it as their only means of access to the mainland. Sullivan has made the trip quite a lot.

“I was there for 25 years, so I spent a quarter of a century on the island. I just really found the history, ecology, and the legacy of the various people there extremely interesting,” he says. “That’s especially true of the Black community that’s been on Sapelo for 200 years.”

Sullivan soaked up all he could during his years there and learned pretty much everything there is to know about the island. And that was something the University of Georgia Press also picked up on.

The Press has commissioned books on similar barrier islands — St. Simons, Jekyll, and Cumberland. They approached Sullivan about writing the definitive history on Sapelo.

“They were doing a series on the barrier islands. Stephen Doster did one on Cumberland and Jingle Davis books on St. Simons and Jekyll,” Sullivan says.

“I got with Ben Galland, who did the photography for both of those books, and we did one on Sapelo. It was released by the University of Georgia Press in 2017. So, it’s still fairly new.”

The result was Sapelo: People and Place On a Georgia Sea Island. The hardback, coffee table book offers hundreds of pages breaking down the history of Sapelo while also exploring its unique ecosystem. For Sullivan, the easiest way to approach this extensive past is by dividing and conquering.

Sullivan breaks the periods down into segments of time, allowing hundreds of years and vast cultural shifts to be easily digested. What follows is just a small sampling of what he unearthed and published in his book.

The Native Americans and European Period

Sapelo Island is estimated to have existed for at least 4,500 years. Archaeologists have found evidence of a thriving Native American culture dating from around 2,000 to 500 B.C. A large shell ring, excavated in the 1950s, is still visible on the island’s north end today.

The Spanish were the first foreign power to come the island, constructing a mission called San Josef de Sapala, which lasted from 1600 to 1685. Sullivan says that Franciscan friars were assigned to the island from St. Augustine to minister and convert the local Guale Indians to Christianity. In fact, “Sapelo” was derived from a Native American word, which the Spanish interpreted as “Zapala.”

“The mission period on the Georgia coast ended because of attacks by rival Native Americans and English colonists from South Carolina. Sapelo was later acquired by the English crown as part of the colony. There was a company of French Royalists who owned Sapelo briefly from 1789 to 1802,” he says. “They also owned Jekyll Island. Sapelo was then acquired by Thomas Spalding and some other planters in 1802.”

Thomas Spalding was a successful cotton and sugar cane planter, born in 1774 on St. Simons Island.

His mother was the granddaughter of John McIntosh Mohr, leader of the Highland clan of Scots who first settled Darien in 1736. His father was one of the earliest planters to experiment with Sea Island cotton, growing his first crop in 1786 on St. Simons.

According to The New Georgia Encyclopedia, Spalding was educated in Georgia, Florida, and New England. He was admitted to the Georgia bar in 1795 and married Sarah Leake, the daughter of a prominent cotton planter from Jekyll Island. He was one of three plantation owners on Sapelo, the others being Edward Swarbreck and John Montalet. By 1843, Spalding had acquired most of the island.

He is remembered for a number of innovative farming techniques, as well as misgivings about slavery — even so, he still owned 350 human beings. The Spaldings’ mainland home was Ashantilly, built in 1820, part of which is still standing today.

“Many of the Sapelo planters had homes on the mainland for business and social commitments. Spalding was very prominent in agriculture and politics. He was an advocate of crop diversity ... he used sugarcane, and cotton was the secondary crop. He was also the first planter to experiment with tabby as a building material,” Sullivan says. “He died in 1851.”

When Thomas Spalding died, the seeds of strife had already been sewed across the country. In 1861, the animosity erupted in bullets and blood. When the smoke settled four years later, slavery was no longer the law of the land. Former slaves on Sapelo eventually established long lasting settlements, including Hog Hammock, Raccoon Bluff, Shell Hammock, Belle Marsh, and Lumber Landing. There, they engaged in agriculture, timbering, and oyster harvesting. Sullivan feels that the evolution of the Black community there was a story that needed to be told and went to great effort to do that in his book.

“During the Civil War, the slaves moved inland due to the naval blockade. They became scattered but many of them made their way back to Sapelo, Ossabaw Island, and St. Simons Island after the war. It’s the only place they knew as home,” Sullivan says.

“They developed a series of communities of freed people, many of whom developed their own agriculture. Some of these communities withered away or were consolidated into others. It’s a fascinating story and one I really wanted to tell in my book.”

Also during this post-war period, the Spalding descendants sold most of their land, which was later consolidated by a Detroit-based automotive executive named Howard Coffin. He acquired all of Sapelo, save the Black communities, for a total of $150,000 (adjusted for inflation, that sum would be roughly $3.9 million today).

Sullivan says that Coffin’s vision helped shape the future of coastal Georgia, as he acquired Sea Island 1926 and built the Cloister in 1928.

“Howard Coffin was an extremely talented man. He was the head of the Hudson Motor Car Co. and really was to the 20th century what Thomas Spalding was to the 19th,” Sullivan says. “He has become a very familiar name around here. With Alfred Jones, he acquired Sea Island and supervised the building of the Cloister in 1928.”

The Coffins rebuilt the Spalding mansion on Sapelo, which became a permanent home for the family. There, they hosted a number of friends and prominent people, including President Calvin Coolidge and his wife in 1928, and aviator Charles Lindbergh in 1929. But the good times didn’t last for the Coffins.

“The crash of 1929 and the Great Depression that followed left (Howard Coffin) in dire financial straits. He had a choice ... he could sell Sea Island and the Cloister or he could sell Sapelo,” Sullivan says.

He opted for the latter, selling the island to R.J. Reynolds Jr., heir to the tobacco fortune, from Winston-Salem, N.C.

R.J. Reynolds Jr. and his family used the island as his personal sanctuary for 30 years and consolidated the island’s Black communities into one — Hog Hammock.

“He bought Sapelo when he was 29 years old as a private retreat,” Sullivan says.

The family left a lasting imprint in the form of the Reynolds’ Mansion, which still plays host to overnight guests. But Sullivan notes there’s another piece of the family’s legacy there as well.

“One of the greatest things Reynolds did was provide facilities for the UGA Marine Research Laboratory, which began in 1953,” he says.

It was an important piece of Sapelo’s history. In fact, Sullivan named the final chapter of his book “Scientific Sapelo” in recognition of the significant ecological research that has gone on at the Institute since 1954.

“The findings and published papers of the scientists about the importance of the salt marsh ecosystem played a major role in the enactment of the Georgia Coastal Marshlands Protection Act in 1970 by the state’s general assembly — one of the most significant legislative acts in history as related to the coastal ecosystem.”

The final era, Sullivan says, takes Sapelo from the Reynolds’ time to the current era. He feels that these are critically important to a comprehensive understanding of the nature of Sapelo.

“Several hundred Black people were still living on Sapelo when it was sold to State of Georgia in 1969, when it became a Wildlife Management Area. The Reynolds Foundation eventually sold the remaining part to NOAA with a state partnership.”

Sullivan managed the state-federal initiative known as the Natural Estuarine Research Reserve for more than 20 years. That provided him with a truly unique understanding of the island’s ecosystem, which he thoroughly breaks down in his book.

“A lot of this was pretty new stuff. I was actually working for the state when I started pulling the material together for the book. The whole project took about three years,” he says.

“I devoted as much time to the science of the salt marshes as I did the history because that is so important.”

• Sapelo: People and Place on a Georgia Sea Island by Buddy Sullivan, photographed by Benjamin Galland is available in local bookstores, including GJ Ford on St. Simons Island, as well as the Coastal Georgia Historical Society’s store at the lighthouse.