Skip to main content
You are the owner of this article.
Edit Article Add New Article
You have permission to edit this article.
Edit
Home
Features
Queue & Columns
Coastal Seen
e-Edition
Events
Advertise
Contact
Subscribe
1 of 6 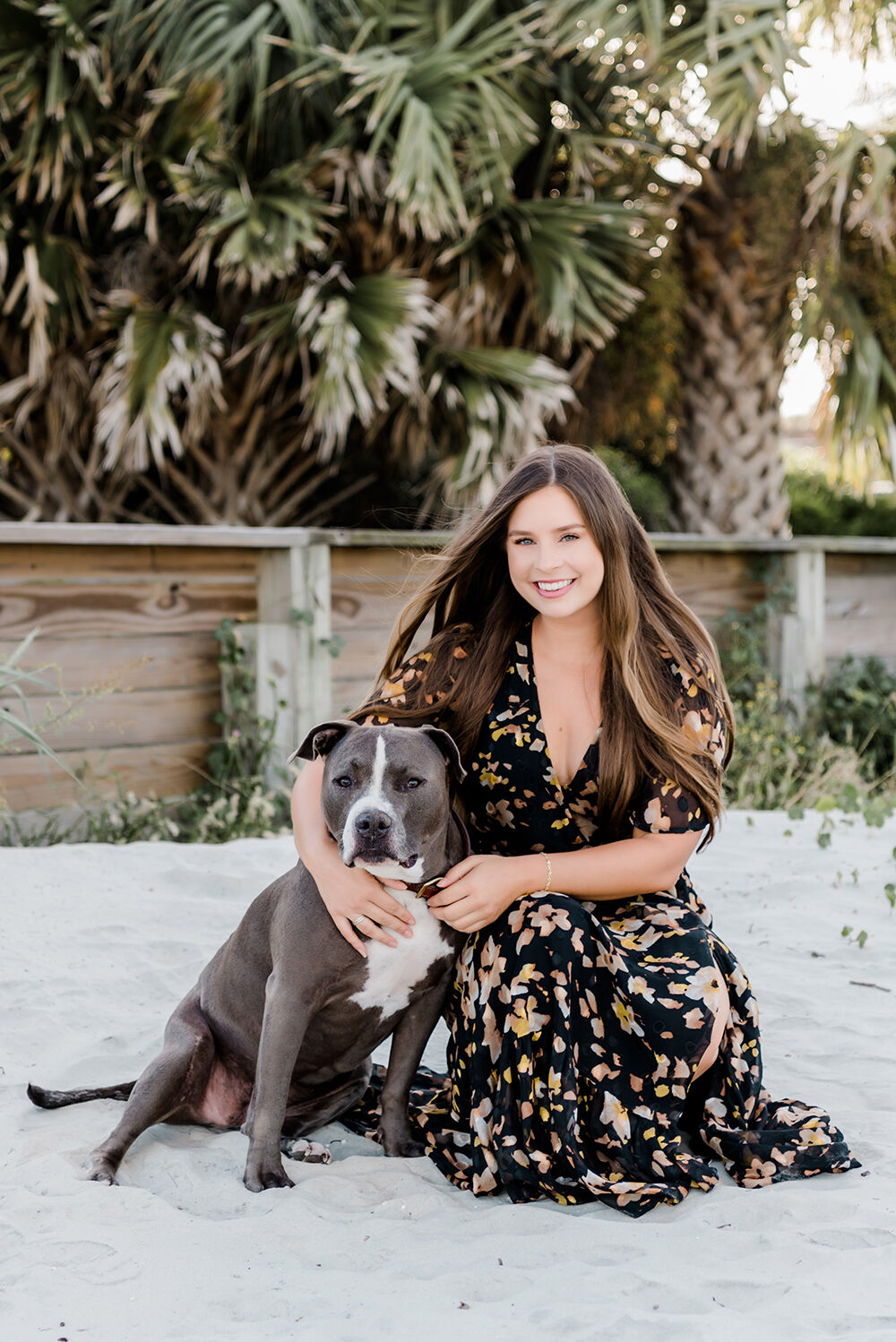 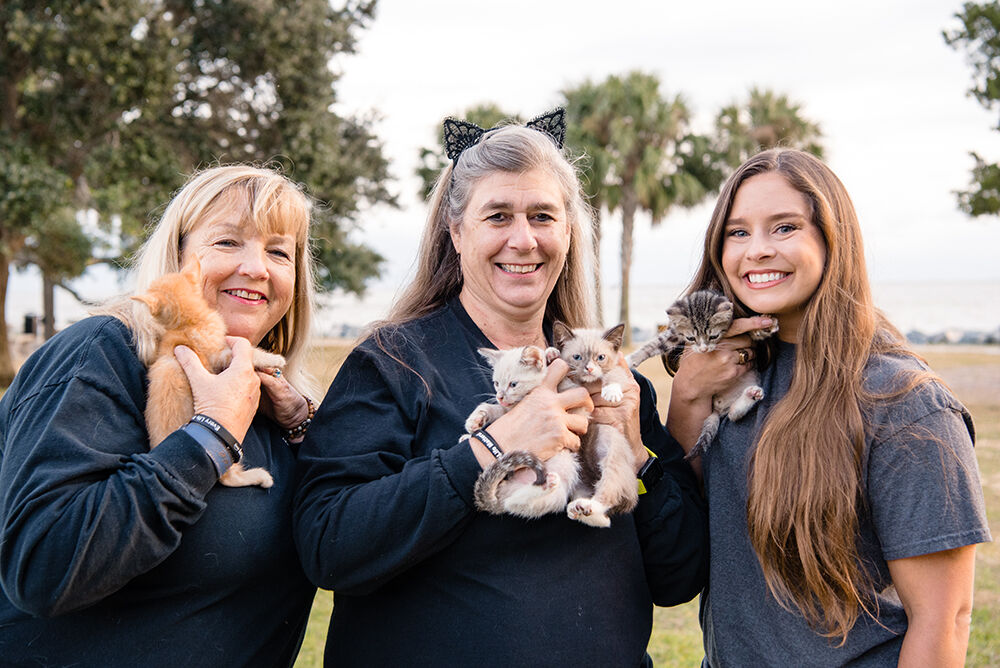 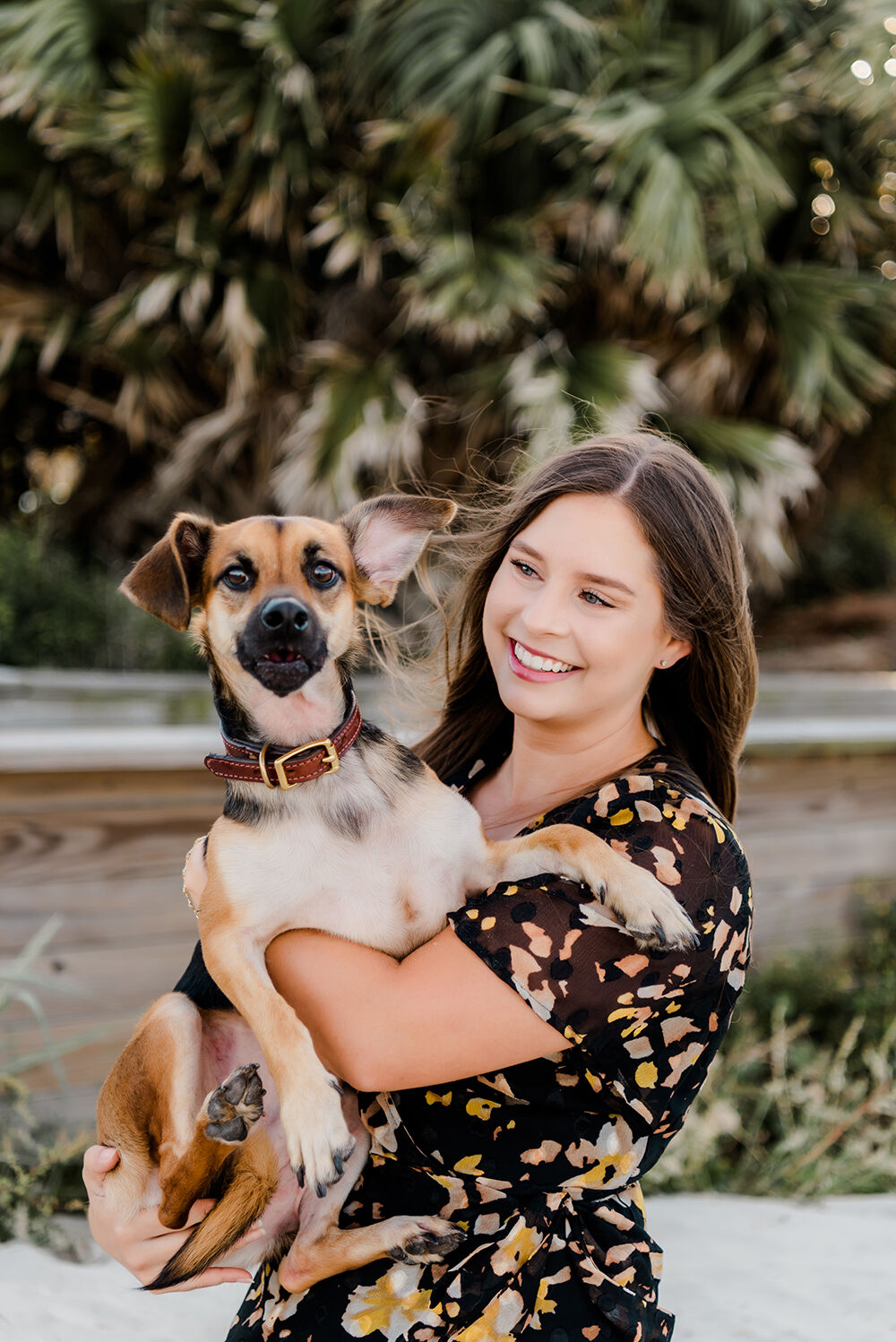 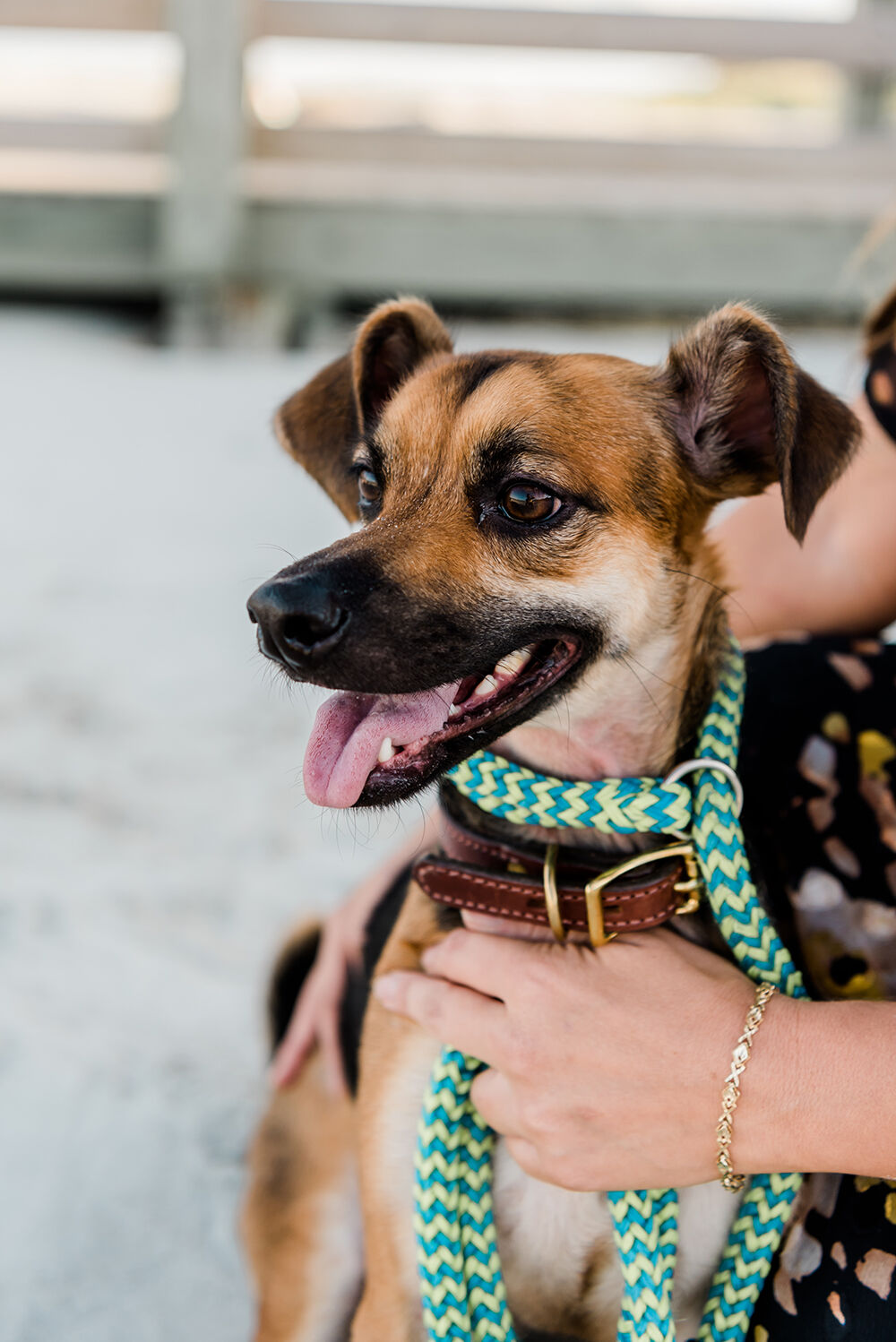 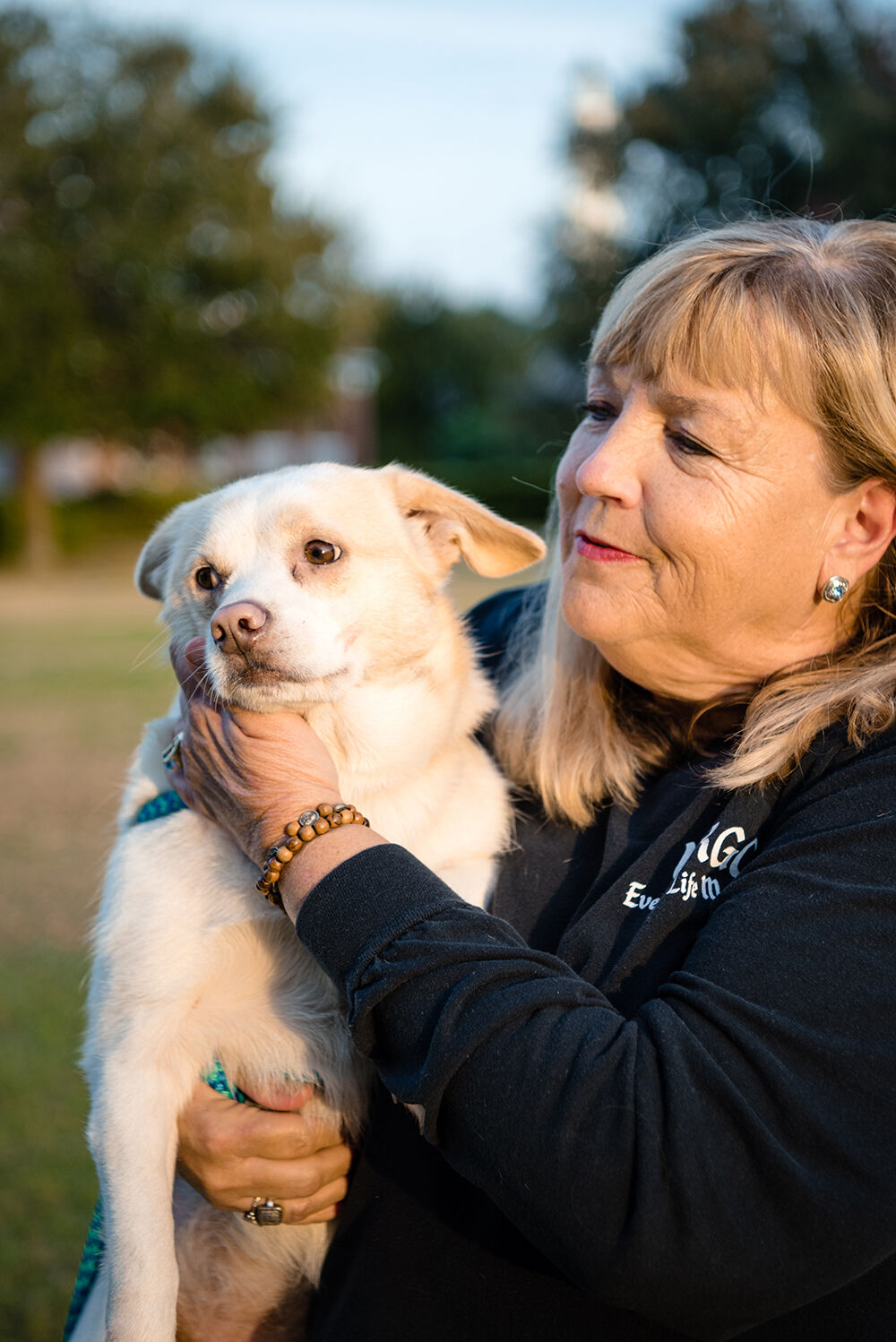 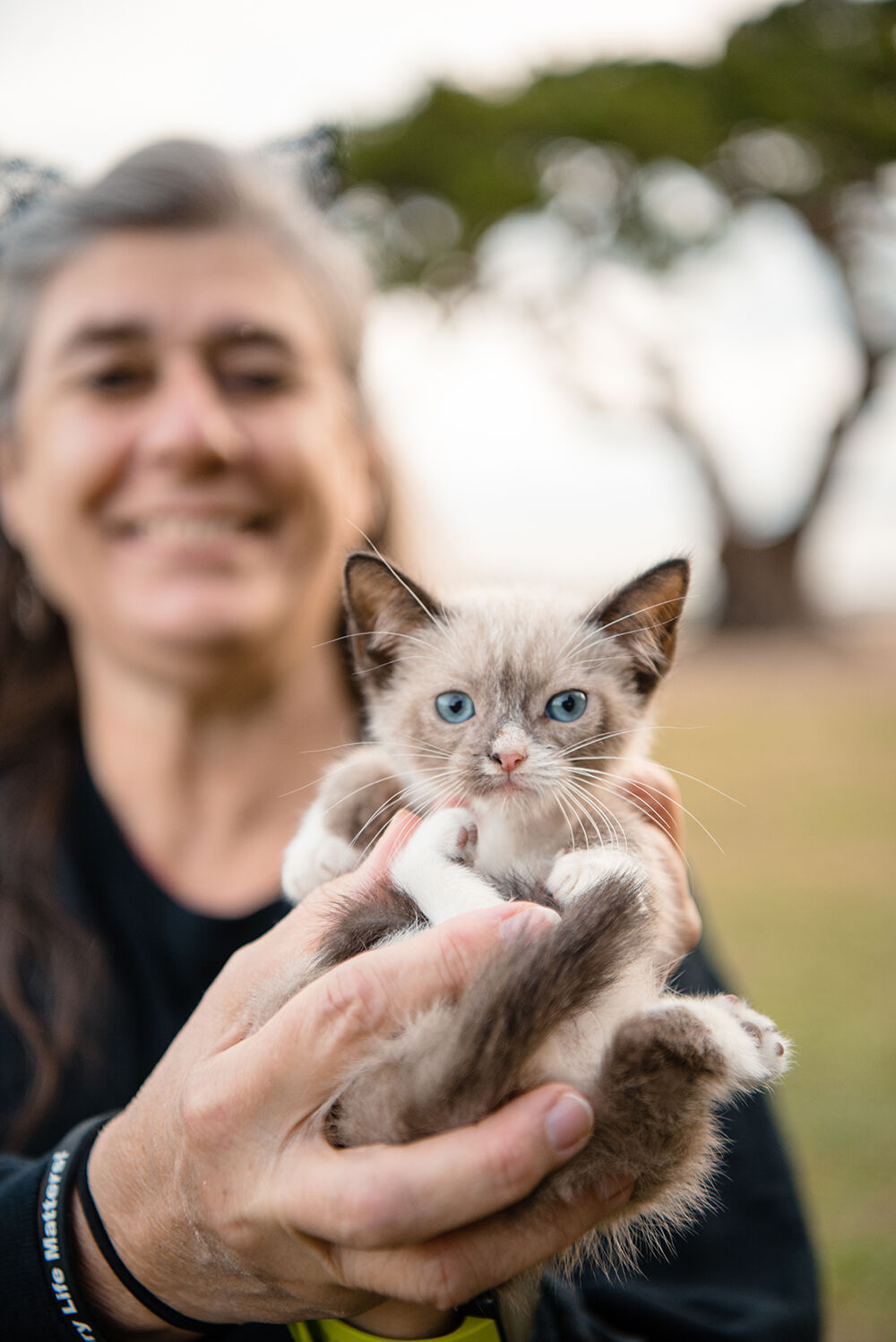 Caroline Blackshear’s long brown locks blew in the gentle breeze. The little dog on the leash stops, eyes wide, taking in his surroundings — the bright sun, the white sand, the rolling waves.

Recognizing this familiar locale as one that harkens good times, the dog began to prance and dash along the beach.

“Scootie!,” Blackshear squeals with a laugh. “He loves the beach.”

He wasn’t alone, though his canine companion was a bit more reserved.

“Bliss is an angel,” she notes, lovingly glancing at her large, grey pit mix.

Blackshear is a natural dog mom. She adopted Bliss while she was a student at the University of Georgia in Athens, assuming full — and often incognito responsibility — for the puppy.

“I saw a newspaper ad that she needed a home. My parents were like, ‘no way.’ I went and got her from Carrollton County anyway,” she says giggling. “I was a freshman then and was still living in the dorm, so I remember hiding her in my backpack or pocket book when I took her outside. She’s a doll. She’s such a great example of how great pit mixes can be.”

Scootie, on the other hand, appeared a bit more ... unpredictably.

“I had a friend from high school call me and say that she had the cutest puppy who just showed up at her back door. It was Scootie,” she recalls.

“I took him to Animal Control to check to see if he had a microchip, then waited to see if anyone claimed him. No one did, so he’s mine now. I always say, ‘bless this mess’ when I talk about him because he is a mess.”

Of course, the now 29-year-old Glynn County native grew up loving all animals, in fact, it was once her ambition to become a veterinarian.

“I always had cats, dogs, and I rode horses growing up. We always had a lot of animals and I’ve always loved meeting other people’s animals,” she says with a laugh. “When I went off to college, I wanted to go to vet school, but chemistry wasn’t my strong suit. I did try for two years but then decided to do something different, so I ended up with a sociology degree.”

Degree in hand, Blackshear decided to come back to her hometown where she started working in the marketing department for a company based in Tifton. As fate would have it, helping animals would still become a major focus in her life. While not doing it professionally, Blackshear found her way into the challenging, yet incredibly rewarding world of animal rescue.

“It’s so funny because even though I lived in Glynn County my entire life, I had no idea that we had both a humane society and animal control. I thought they were the same thing. A few years ago when a storm was coming through, everyone had to evacuate. I saw a Facebook post where animal control was asking for hard chews and toys for the evacuation. So I ordered a bunch of stuff ... not realizing it wouldn’t arrive in time,” she says with laugh. “I took them over after we all got back in town. That was my first time going to animal control.”

While she was unfamiliar with the facility, Blackshear knew herself well enough to try to avoid meeting any dogs in need of homes.

“I didn’t want to go back to the kennels because I knew if I did, I would come back with 10 dogs,” she says.

After a volunteer offered some good natured coaxing, she relented. But she didn’t leave with another pooch. Instead, she left with fresh determination to help the dogs she saw.

“They’re trying to do the best they can for these dogs and keep them safe. But it was crowded and I never knew that we had such a problem with overpopulation. It broke my heart, so I signed up to be a volunteer. I would go out to animal control to walk the dogs and help promote them through a Facebook page,” Blackshear says.

“I also started trying to reach out to different rescue groups to help find the dogs homes. There was one time when the shelter was so packed that two dogs were put in each kennel. Two of them got into a fight ... and one was hurt pretty badly, so much so that I was worried that she was going to die in my arms. I started frantically reaching out to rescues, and that’s how I had my first interaction with No Kill Glynn County.”

The local nonprofit, co-founded by Shelly Bydlinski and Marci de Sart, formed in 2013. Since that time, it has run entirely off donations, volunteers, and occasional grants. The group has been credited with spaying and neutering more than 3,500 cats, which was its primary focal point in the early days. Now, they’ve also been instrumental in saving 150 dogs from euthanasia. No Kill Glynn County (NKGC) has also stepped in to help families who are facing financial strain due to a pet’s medical condition or vaccination costs.

When Blackshear first reached out to them, they helped her find care for the injured dog and eventually the pup found a home in Camden County.

“They really took me under their wing. The dog, named Tammy, did recover and found an amazing home with the sweetest lady. It was just a great experience,” she says.

Since that first brush with NKGC, Blackshear has jumped in with both feet. She became a dedicated volunteer and board member, working in multiple areas of the mission. It’s become her life’s work, but one with many highs and lows along the way.

“It’s hard to even describe ... every piece of animal rescue is emotional. It’s not just about helping the animal, but it’s also about helping the people. That adds another layer of emotion to it,” she says. “Because there’s so much emotion in it, you have to take even the smallest win as a big win. Whether that’s getting a dog seen by a vet or getting them to a foster ... you have to celebrate it. That is the best feeling.”

With the drive and passion that accompanies it, Blackshear concedes that the effort can become all-consuming. That, she cautions, can prove detrimental for those working in rescue efforts, and ultimately, for the animals as well.

“That’s probably one of the most challenging parts. You’re so invested in saving and rescuing these animals. I’ve had to learn how to say no or to at least suggest other outlets. But you have to be careful because you can get really burned out and some days you just don’t know how you’re going to make it through ... you do, you pull yourself up by the bootstraps and get through it,” she says. “I had to learn how to take time for myself and for my own animals. If you let yourself get to the point where you’re burned out, you’re not going to be of help to other people or the animals.”

That’s a resolution she advises others embrace with the arrival of the new year. It will prove invaluable if one is looking to find their own passion project in 2022. Blackshear notes that there are dozens of causes one can pursue. And certainly, the NKGC team is eager to welcome any new volunteers with open arms.

“We’re always looking for new people to add to our team. We have a lot of different opportunities to help ... either by volunteering, coming to events, helping create events, or through becoming a foster. Our founder, Shelly, has dedicated almost eight years of her life to the betterment of the animals in Glynn County,” she says.

“She’s always open to talking with anyone and teaching them about what we do and why it’s important. If someone is interested, they can find us at No Kill Glynn County on Facebook and other social media or at nokillglynncounty.org.”