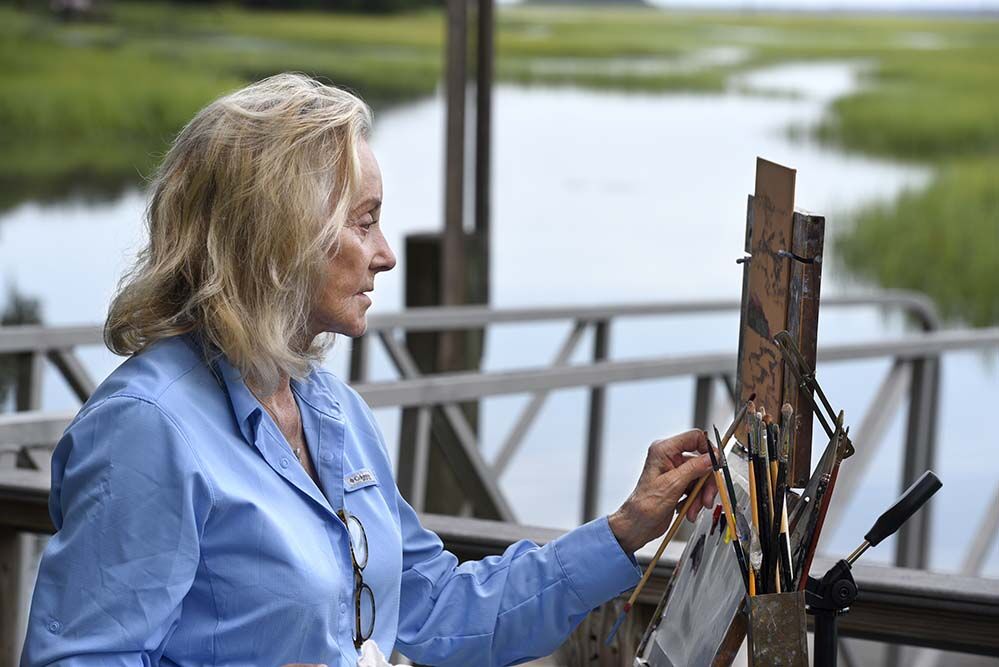 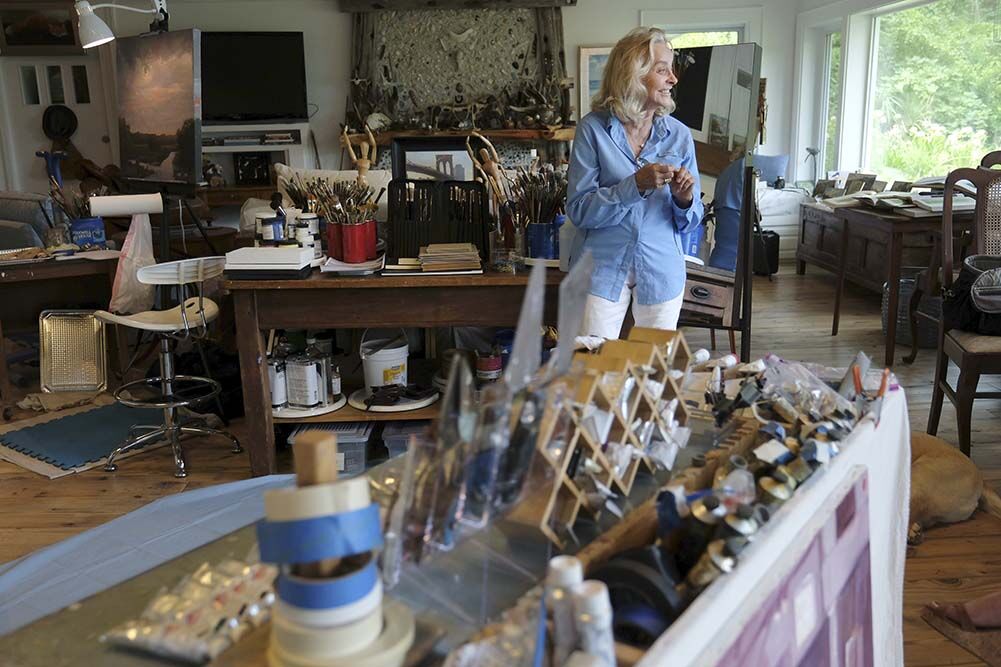 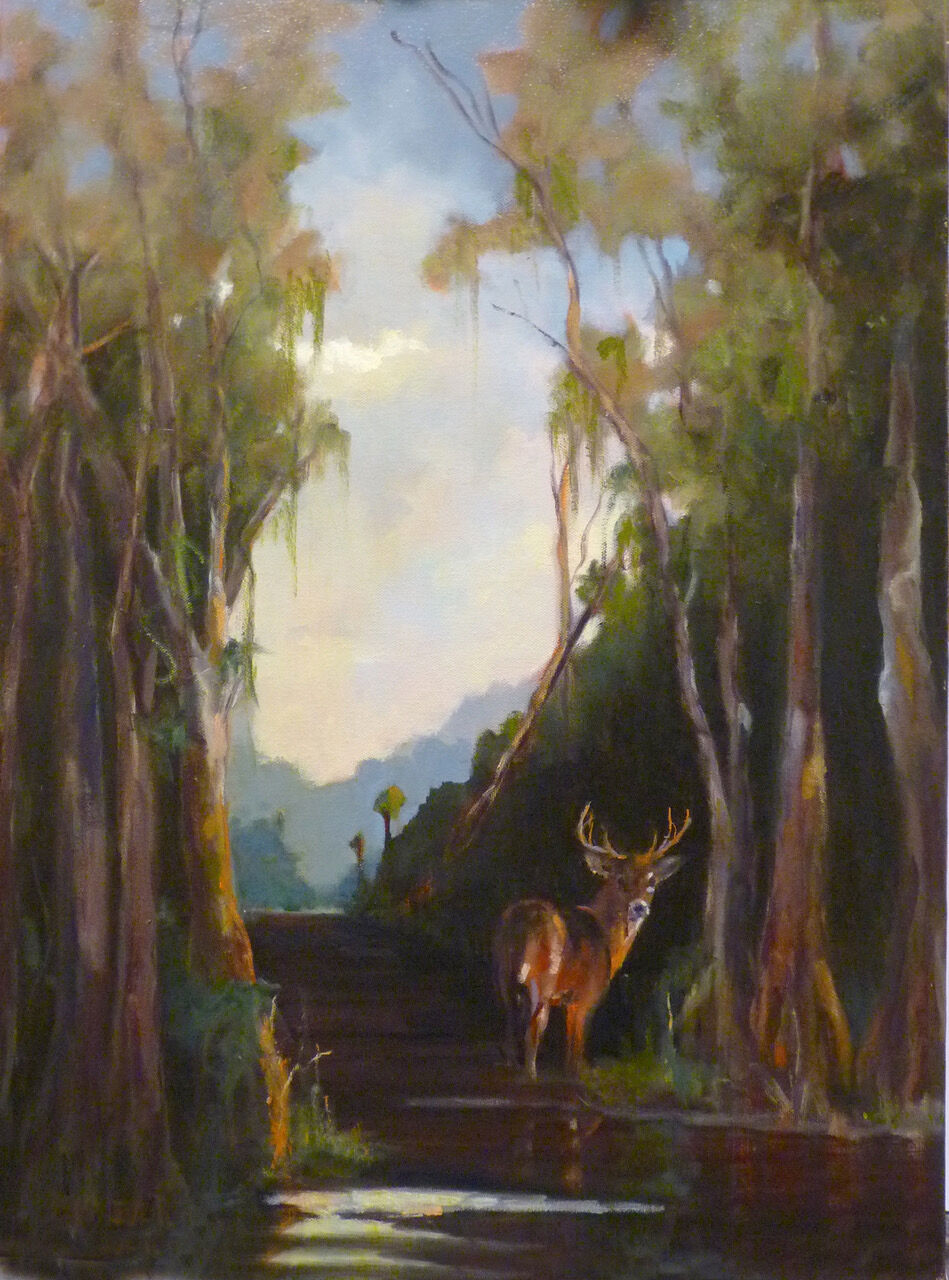 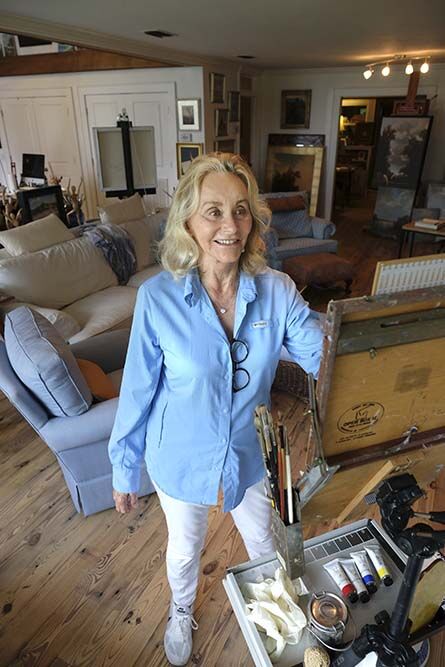 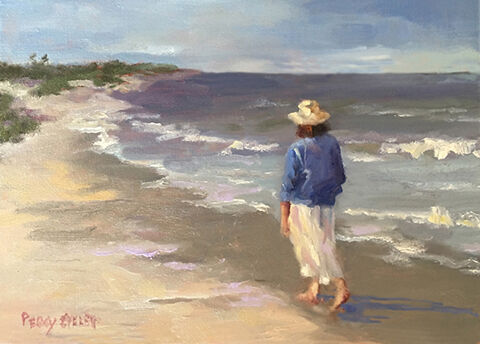 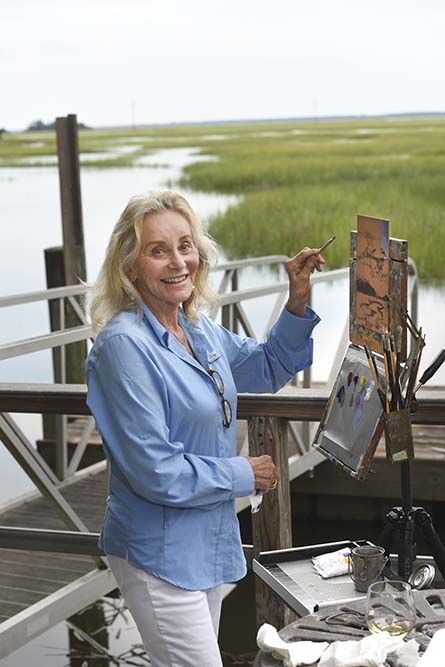 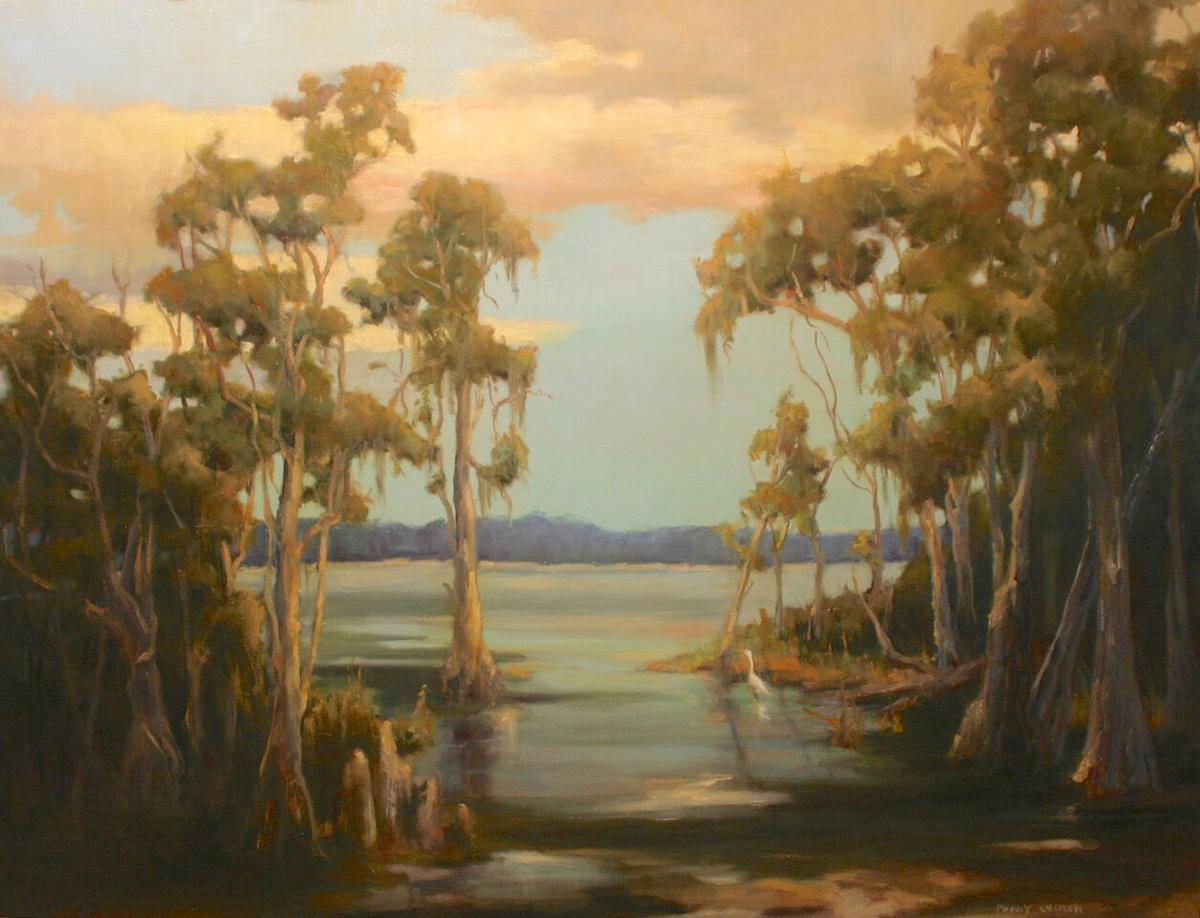 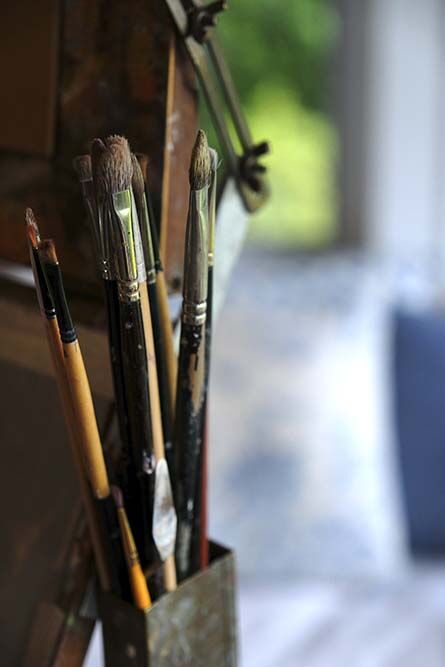 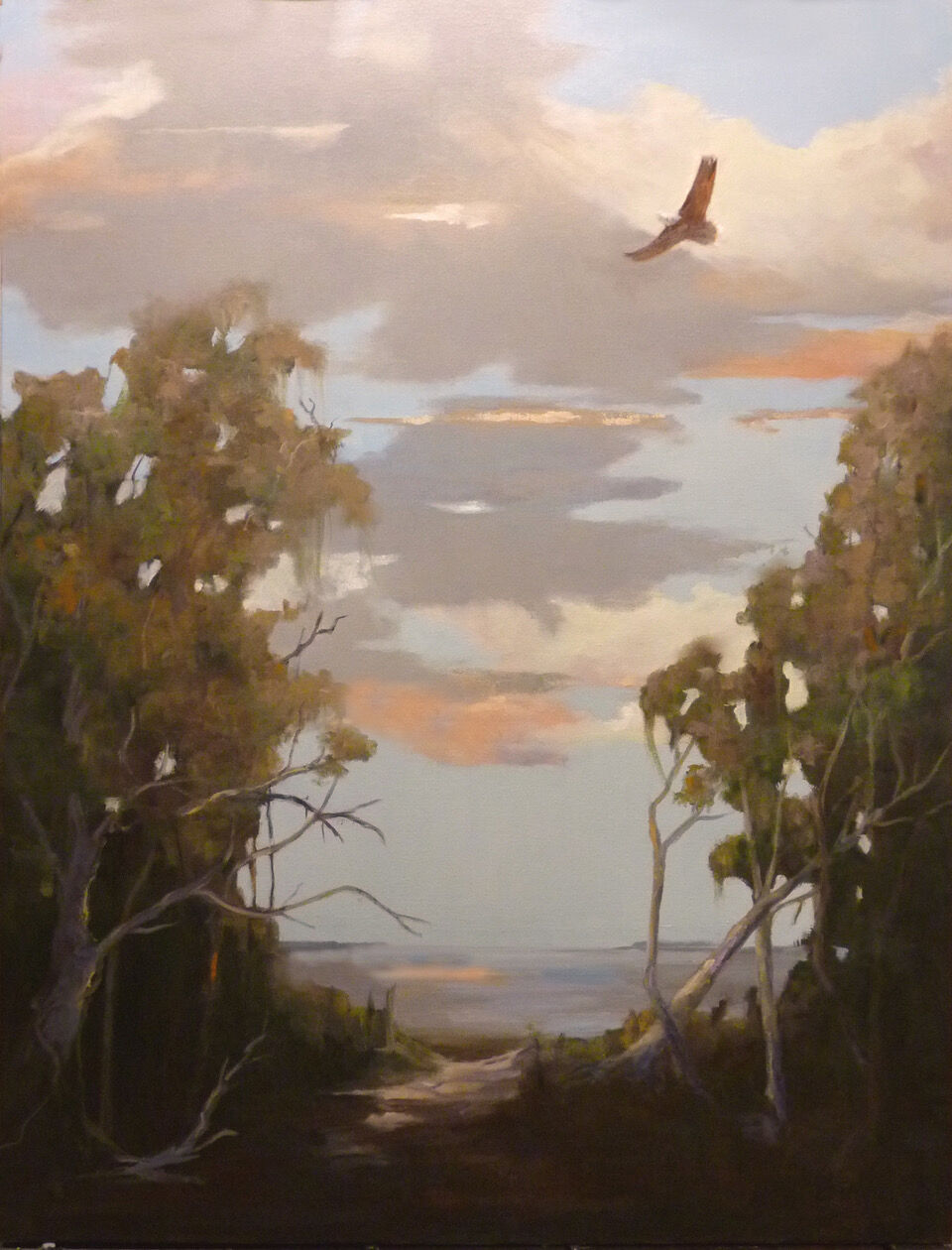 The marsh expands as far as the eye can see, seamlessly merging into blue sky. In an instant, a fish jumps and splashes into the water.

“That was a mullet,” Peggy Everett says, her eyes never leaving her canvas.

The painter knows every sound and shape of the Crescent River, the waterway that provides the rear border to her McIntosh County sanctuary.

From the oaks and palms that dot the landscape to the pods of dolphins that often visit her dock, Everett absorbs it all. She is, after all, an artist, and keenly attuned ­­­to the world around her.

“You have to be able to see things … to really see them,” she says, dabbing her brush in the water. Everett refocuses on the painting she is creating.

“You also have to make sure not to dip your brush into your wine instead of your water. That happens a lot,” she nods with a grin and a wink.

Her hands move effortlessly, recreating the scene before her with a sense of casual ease that can only come from a lifetime of practice. Another job well done, she gathers her tools — canvas, easel, and paints — and retreats into her waterfront home.

“Come on, Ease,” Everett calls to the yellow lab waiting in her yard.

“His name is Easy Breezy,” she clarifies.

She opens the door to be greeted by Johnny Cash’s “Folsom Prison Blues” pouring from the speakers. Waltzing through the wall of windows, one finds a picturesque artist’s abode.

Palettes, brushes, easels, and paints — this is her world. Of the multitude of works adorning her walls, the majority are creations by her friends and mentors, fellow artists from whom she’s learned much. Each canvas has a meaning and a story.

Everett truly has so many — tones and hues of a truly exceptional life. Throughout her home, tokens and trinkets from her experiences are on display — a cow’s skull and Native American decor from her time spent out West operating a ranch. Paintings crafted from excursions overseas also dot the space. Stepping into her office and library, Everett stops to point at a strikingly realistic portrait of a man.

“Do you know who did that one?” she queries. “Bob Schieffer. He’s one of my students.

He is a fabulous artist ... he can paint anything. And, he is just the nicest man.”

It’s certainly not her first brush with celebrity. Everett has many a story about meeting the rich and famous through her various painting exploits. One notable encounter was painting alongside Tony Bennett in Florence, Italy.

“I was there in 2006 painting with a girlfriend. She knew (Bennett) and we ended up painting together. He wanted to paint next to me because he said I was a serious painter,” she says with a laugh.

Though she is a “serious artist,” Everett doesn’t let her talent or her brushes with stars go to her head. Instead, she’s remained incredibly humble, even with the countless achievements and accolades she has collected.

Everett has long been hailed as one of the most well-respected and prolific area artists. Her work — from portraits to landscapes to abstracts — has graced private collections, businesses, and hotels throughout the Isles and beyond. But while she’s incredibly successful, Everett also makes sure to live her convictions through her work, donating a portion of proceeds from sales to causes close to her heart.

“A percentage of all my sales and workshops go to organizations in Georgia that protect wildlife and our natural resources,” she says. “… also agencies dealing with domestic abuse and violence.”

But never one to rest on her laurels, Everett has used the quiet of the recent quarantine to embrace different themes. While she has continued to take on a number of commissions, she’s also found time to continue learning.

“I am still learning on Zoom from Scott Christensen. Ken Wallin, Janet Powers, and Mary O. Smith are local artists who inspire me,” she says. “I have artist friends, like Margaret Durant, who give me honest critiques. Actually, any artist will give you a critique — you might not want to hear it, however.”

Everett has always embraced learning. It began with private lessons in Atlanta when she was a child.

“It started when I was in elementary school and everyone was drawing on the blackboard with white chalk, but I used colored chalk … my teachers made a big deal about what I was doing. They told my mother that I needed to take art lessons, so I started with these Russian portrait painters, Roman and Constantin Chatov,” she recalls. “I remember that later I went to New York and got an Andy Warhol abstract painting and brought it back. Constantin, the husband, bopped me over the head with it. They were pretty serious about art.”

She went on to the New York Studio School studying under Esteban Vencete, Joseph Santore, and Graham Nickson. Everett also studied representational art at the Art Students League of New York, Art Students League of Denver, and The Florence Academy of Fine Art in Florence, Italy. She also logged in time at the Hermitage Group in Colorado.

While she’s studied with the best of the best, today, Everett is a master in her own right. And one of her greatest joys is teaching, sharing what she’s collected through a lifetime of lessons. In pre-corona times, Everett held frequent retreats to teach plein air painting both near and far — as close as Cumberland Island and as distant as Aspen, Colorado.

“I don’t know that I’m a ‘great artist,’ but I do feel like I’m a good teacher. It’s my firm belief that anyone can paint. I’ve never had a student who couldn’t paint,” she says.

“But, you can’t just do it once a week in a class and be a great painter. You might be able to do it three times a week and be Okay … to be great at it, it’s something that you have to do every day.”

Everett herself has certainly found solace in her craft during the troubled times of the coronavirus pandemic. And she feels that it’s something that can offer a sense of comfort to most during difficult periods.

“The role of the arts — whether one- or two-dimensional, photography, poetry, books, film, or music — is to provide a relief and a pause in the noise of the day. It causes one to exercise their imagination, explore their senses, and for a time … escape. It is also a way to be happily alone with yourself,” she says.

“Now, I think, we want the arts to enrich our lives and our living spaces. You might want to learn to make art or you are already making it. Whether it is painting, writing, photography, or gardening, you are creating and using your imagination. If you can imagine it … it can happen — maybe all this craziness has been given to us as a time to dream, inspire, and create.”